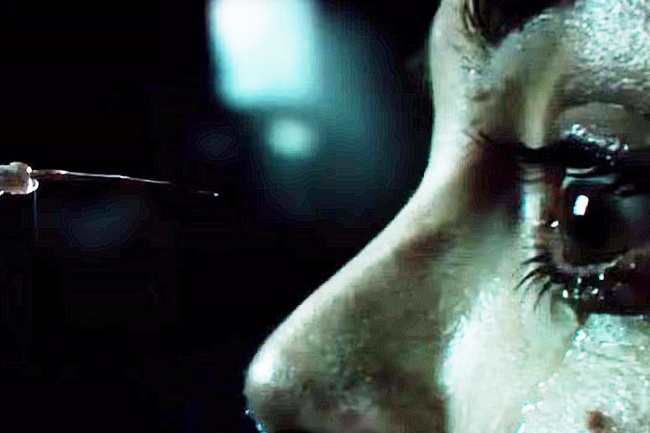 So ‘The Hallow’ (originally titled ‘The Woods’) is a low-ish budget British film from young male director Corin Hardy. It’s his second only feature and already a film that shows immense talent. It’s a horror in the woods genre effort and was shot in Ireland to add more subliminal atmosphere of those mythical ingredients of Irish fairytale and goblins. You have to admit just the sound of a gentle breeze in the woods swaying the tops of the ancient trees or forest’s is very creepy when you are all alone, especially at dusk. There have been many ‘cabin in the woods’ horror films and many more to come and this is one of the good ones.

The film opens with Adam at home in those mossy woods strolling through the trees with little Finn in a baby sling, surveying the woodland for plans to log the area to fuel his cottage. In his inquisitive way he stumbles upon an abandoned house with the carcass of a rotting animal that has been burst open from a black fungus-like substance. He is intrigued. He takes samples of the carcass and fungi before heading home.

Back at the cabin Clare meets the foreboding and agitated Colm (Michael McElhatton), who drove up looking for Adam. He wants to speak to Adam on matters most concerning.

That night, the baby begins to cry, and they hear a crash from his room. Clare runs to Finn but the door mysteriously slams shut. Once inside they realize the window was smashed and they call the Garda, believing it may be Colm from the village. The police believe it to be a bird flying into the window causing the damage or something and don’t file a report. The officer tells the parents that they should read up about legend of the surrounding forest. The villagers claim it belongs to “The Hallow” and is inhabited by “fairies, banshees and baby stealers.” The police leave. Adam goes outside to take pictures of the damage for the insurance and notices creepy movement in those woods.

The next day Adam is in town with Finn with the damaged window to have it repaired and is again warned about The Hallow. Back at the house Clare is somewhat frightened by Colm when he comes into her home uninvited, Colm warning Clare to leave the village and gives her an old book that talks of the hallow.

On the way home from the village Adam has issues with his car as dusk’s sweeps its menacing shadow over the forest and forcing him off the road and nearly crashing the car. He opens the bonnet to see a vine-like fungus knotting the engine. Popping the boot, he is hit and pushed in by unknown assailants. After coming around, Adam hears menacing noises outside scratching at the car, with Finn, still in the car, beginning to cry again as the car rattles from the intruders and shadows move menacingly across the windows. Adam frantically kicks through a hole in the backseat cushion and pushes his way inside. He rescues Finn out of the car, which has a number of deep and terrifying scratches across it, glimpsing more scary silhouettes in the woods as he runs towards home. Whatever is out there it’s not happy with the family entering the woods and maybe time for the family to leave before it’s too late. 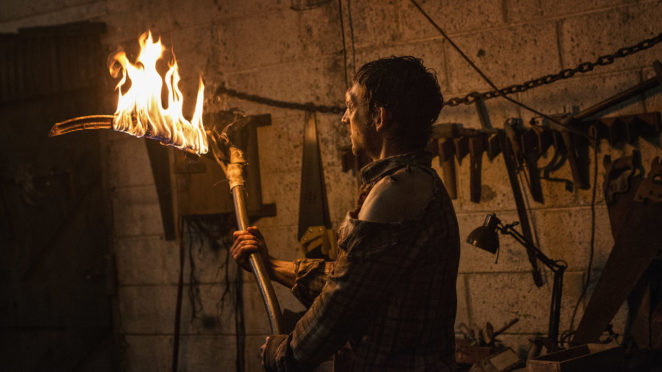 I quite enjoyed this and an above average horror in the woods movie on my rating scale. That combination of a father and mother trying to protect a newborn baby adds a real menace to the film and both parents quite literally torn on how they would go about that. To use a metaphor it’s like an egg and spoon race as they flee for their lives but cant drop the egg.

The unknown cast always helps as you don’t know who will get killed first – if anyone at all – and the supernatural special effects very good on screen for this type of low budget. The director said he was heavily influenced from Gareth Edwards Low-Fi classic Monsters (2010) and use similar ‘off-the-shelf’ software to create his monsters. But it’s not the monsters that scare you so much but the use of the forest and the isolation that’s creepy.

The concept of a fungi taking control of an animal or human is not outrageous. In the rather good zombie movie ‘A Girl With all the Gifts’ they mention the real life scenario of the Carpenter Ant. The O.unilateralis, or zombie fungus, infects them as they undergo severe whole body convulsions and the fungus then starts controlling their brains. Eventually, the zombie fungus directs the ant to climb up a tree where the ‘next stage of the fungus’ life cycle’ occurs. Specifically, the fungus grows through the victim’s head to produce a long stalk; when the conditions are right, pods open to make the fungus airborne, allowing it to infect many more hosts. Interestingly, the ant zombie fungus also protects its infected host from other environmental pathogens to insure its survival from the infection. We would not want that getting airborne like Ebola.

So, on the whole, a solid non clichéd horror film with some new ideas, solid acting and genuine jeopardy. With just a small cast of skilled actors it’s not about pretty girls being killed in very short skirts or in order of cool but an atmospheric and tense chiller. And when the action gets going and the threat is introduced it’s pretty much nonstop fear and tension from there on in and doesn’t let up. You have never wanted to help an innocent baby to safety as much as you have in this film.

Washington Post –‘In a departure from the sexually active teens of most slasher movies, “The Hallow” plays on more grown-up fears: keeping your family safe and steering clear of a vengeful Mother Nature’.

The Independent –‘The “bad fairies” lurking within have the ability to stretch their roots and branches round car engines and baby’s cots. The problem is that the plotting gets lost amid all the foliage’

Times UK –‘The Hallow is a horror movie in which evil black gunge plays a key role and rural Ireland is the backdrop. A bit like Dark Water meets Ballykissangel, but worse than both’.

Moviefreak .com –‘By the time The Hallow builds to its breathtakingly personal climax, it’s hard not to be impressed by what Hardy has accomplished.

Irish Times-‘The Hallow promises to be an Irish mythological horror, replete with wee folk and banshees. Unhappily, it merely namechecks these entities and delivers nothing of the sort’.