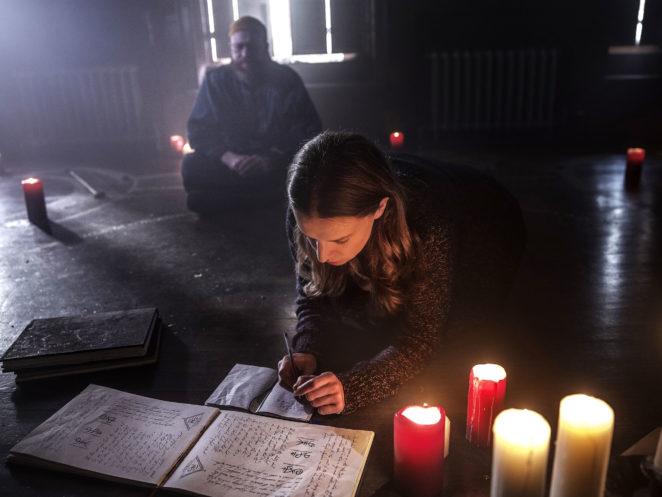 So here’s a nice little British horror film from Director Liam Gavin, his first full feature after no notable output so far after 4 short films in ten years. It’s quite an original idea as far as the horror genre goes and an interesting and atmospheric set up. It stars that Brummie actor Steve Oram who is brilliant as the serial killer in Ben Wheatley’s likewise comedy Sightseers, and Katherine Walker from Leap Year (2010), a not so good movie.

British horrors have had their day after the glory gory years of 1970s but not so much the quality but the quantity the problem. There was a lot of dross in that Hammer era. But when we make them these days they tend to be fairly good as there simply isn’t Hollywood money here to make dross and so filtered out like gold panning. I’m glad this one popped up on Film4 as it’s not that bad.

An attractive 30 something middle – class lady called Sophia (Catherine Walker) is grieving the death of her murdered son, seven-year-old Jack, who was abducted by a group of teenagers for a cult ritual, as you do. She is of means and has just rented a large secluded house in rural Wales for no questions asked and a little something for the estate agent to keep it that way. Whatever she is going to do its not normal.

Joining her is grumpy occultist Joseph Solomon (Steve Oram), hired by her to perform a rite detailed in the “Abramelin”, a medieval European, Kabbalistic grimoire used to summon one’s guardian angel. It’s a grueling, scary and obedient quest and will take her to the darkest corners of the unknown, hoping to make contact with her dead son through her guardian angel.

Joseph is uncompromising from the off and snaps and orders her around to make sure she is disciplined and, more importantly, actually wants to go through with this intense and near perilous journey where she will all but touch the underworld. Before they met she was given instructions over the internet over period of time which must be completed for them to proceed, which includes learning foreign languages, reading ancient text and prepared to do a sexual ritual or two. It will also cost her £30 grand as it can take up to six months with seven realms to cross in this world and two in the next.

With supplies purchased and agreed she will cook and clean for Joseph as part of the deal a ring of salt circles the house and the candles are lit and the pentangle drawn as she slowly moves through the phases and agreed practices that will see them not leaving the house for that period. Sophia also hides her real goal and intentions when, and if, she meets her guardian angel.

Joseph quickly becomes frustrated when she concludes the grueling ritual isn’t working and back on the bottle he smuggled in as the cracks appear this ritual invites, including Sophia having suspicions that the sexual stuff involved is purely for his gratification. Can she trust this guy alone in the countryside? But they press on as those thumps and creaks an old house may make now and then increasingly become creepier and clear they may well be peeling back the layers of this world to the next…

Acting wise and concept this is surprisingly detailed and smart for a horror film. The director did get carried away with the ending but it’s hard to end a film like this. The idea of sacred rituals slowly unlocking doors from the living to the dead is strangely believable. When you treat that occult stuff with forensic accuracy and history it can creep you out. The director does that well here.

It’s a solid two-header for most of the movie as the chalk and cheese leads work so well. They put a surprising amount into their performance here, the horror film genre not known for that. Walker is classically trained and Orams the no nonsense crass working-class gruff Brummie and that’s how they play it to great effect. There are moments that don’t quite fit and a tad out of place and the film flawed in places. But on the whole it’s an above average atmospheric British horror that’s well worth a look, a bit of Ben Wheatley’s Kill List texturing to it.

It’s not blood and gore stuff and all about suggested horror in the first half and what’s real and what is not in the second half. We know this stuff is not real but if the writer and director pick out stuff that was real back then and mix it up with myth and menace you have an intoxicating spooky little film here.

LA Times –‘ The two leads are resolute soldiers about it all, but they’re dutifully edgy elements in a stylist’s frame instead of fully realized characters living out what is supposed to be the riskiest time of their lives’.

Sight & Sound –‘It is sublime, uncanny and in the end deeply moving – and there is nothing else out there remotely like it’.

The Mail –‘A Dark Song is a ridiculously strong and beautifully acted piece of work, but one that deserves a much more satisfying conclusion’.

Eye for Film –‘ A Dark Song is a thoughtful, grounded take on the search for meaning that mixes horror conventions with things still darker, yet which strains towards a transcendental moment which a lesser filmmaker would have been afraid to contemplate’.

Austin Chronicle –‘An instant classic, the sort of film that will make you check under your bed at night and then amplify into terror the midnight creaks and 3am breezes that unsettle every house at times, most especially yours’

The Sun –‘I found A Dark Song absorbing and fascinating, a subtle horror tale that haunted me for weeks’.