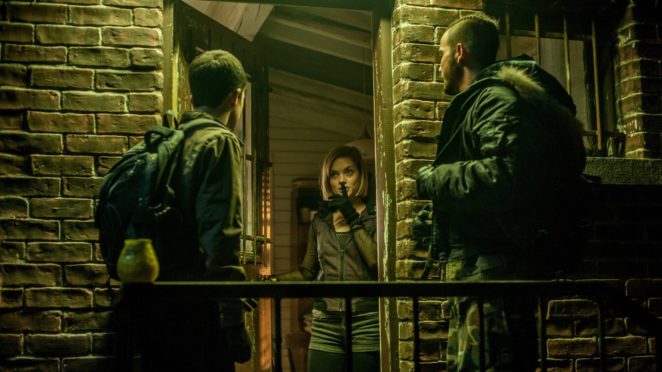 Now here is a cracking little low budget horror/thriller that pretty much everyone of age should enjoy. Yes it has an unknown cast and suffered little marketing but with an experienced horror director Fede Alvarez (Evil Dead remakes), for its minimal $8million budget, did a fantastic $157 million back to date. That is a classic word of mouth movie success. Horror films tend to fly like that. You need to check this one out guys. It’s so not one of those cliché American teen slasher horrors where the kids get killed in order of cool and the amount of clothing they are wearing.

Fresh faced older teenagers Rocky (Jane Levy) and Alex (Dylan Minette), alongside experienced con ‘Money’ (Daniel Zovatto), make a living by breaking into homes in and around Detroit that are secured by Alex’s father’s security company and selling the items they take to local villains. They research their targets online to maximize their booty but the people buying the stolen goods from Money tend not to give them a fair price. Rocky’s has a dream of moving to California with her little sister, Diddy(Emma Bercovici), to escape their abusive deadbeat mother (Katia Bokor) and her alcoholic boyfriend(Christian Zagia), and needs the big score soon. Ales’s father is unaware of their deceit.

Money gets a hot tip that a retired US Special Forces veteran living in a dilapidated Detroit neighborhood has $300,000 bills in his house, given as a cash settlement after a wealthy young woman, Cindy Roberts (Franciska Törőcsik), killed his daughter in a car accident. The three stake out the rough neighborhood and discover that the man is in fact blind from a blast during the Gulf War. This will be an easy score.

That same night the three case the house and drug the Blind Man’s growling big dog. All the entrances are locked but Rocky enters the house through a small window and lets the other two in. The guy is blind after all so if they are smart and quiet this should be an easy search for the money and valuables. They decide to drug the old feller while he is asleep just in case and when the more reckless Money resorts to shooting padlocks off doors it’s a good job they did. But it quickly goes pear-shaped as the old men is wide awake and his remaining senses more tuned than they thought and with his special forces training manages to somehow fight back and trap the robbers in the house as the violent game of cat and mouse begins in a fight to the death… 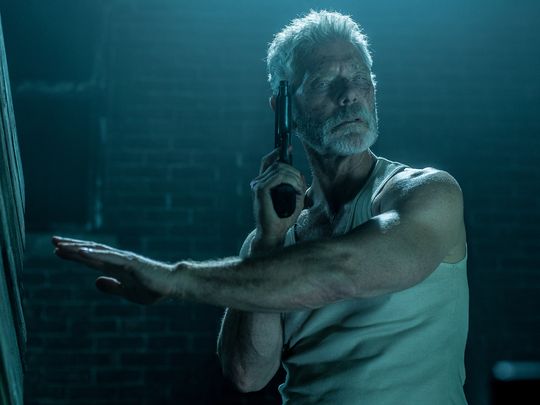 I really enjoyed this; a well crafted and taught ‘trapped ‘horror/thriller that keeps you on edge as you are pulled deeper into the labyrinth. Ok, at times it does stretch credibility as ailing old blind man manages to repeatedly repel young perfectly sighted people but you have to accept that in the movies and its very well done here in context. The kids are not hardcore enough to just take the guy out and just want his cash and so room for empathy for the old guy. But he has no sympathy for them invading a blind man’s house. If you go with that it’s a cracking two hours of home invasion tension.

As I say the cast is unknown and so you are pulling for neither side until the big and unexpected twist (the best one) is delivered and then you take sides. On the cast I would say I was not convinced that the two fresh faced actors who play the teenagers would be involved in house burglary in Detroit in what must be a pretty competitive and brutal sector but their vulnerability and the old man’s disability help to make the implausible work as a movie.

Coupled with tense music and Hitchock plot mechanisms the director Fede Alvarez is able to keep the tension going and the people detained in the house with real skill. There are moments where you throw your hands up in the air and say that would not happen mate but, as I said, that’s the movies. Get past that and you will really enjoy this above average trapped cabin in the suburbs thriller. This is not your average horror in any way.

New Yorker –‘The suspense is built as carefully as it is in a good John Carpenter movie; Alvarez uses the camera like a stealth weapon, exploring dark corners and hidden areas of the house with devilish glee’.

The Melbourne Age –‘ A movie that made me hold my breath more than once, and managed to take suspense to heights most modern horror movies don’t even bother with anymore’.

The Mail –‘You can easily compare Don’t Breathe to thriller horror classics like Psycho, Old Boy and Vertigo’

Globe & Mail –‘ A home invasion story that is as artfully terrifying as Home Alone was entertainingly hilarious’.

Miami Herald –‘You start out fearing “Don’t Breathe,” but by the end you’re laughing at it – and the humor is not intentional’.

NY Magazine –‘You start out fearing “Don’t Breathe,” but by the end you’re laughing at it – and the humor is not intentional’.