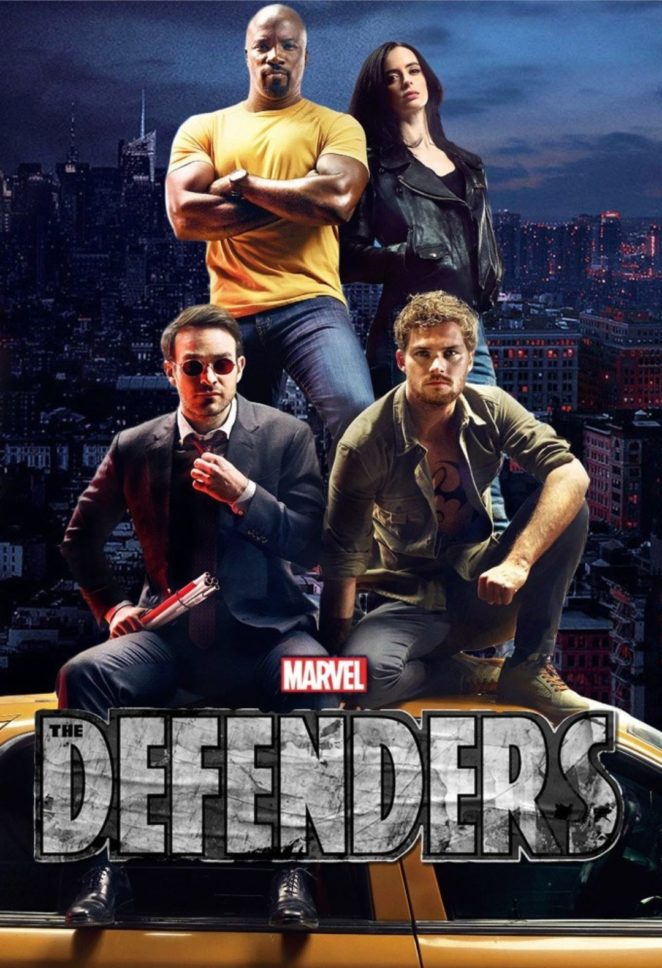 Marvel’s The Defenders, or simply The Defenders, is an American web TV miniseries based on the Marvel Comics characters Jessica Jones, Luke Cage, Iron Fist, and Daredevil, who form the eponymous team called The Defenders. This miniseries was created for Netflix by Douglas Petrie and Marco Ramirez. Set in the Marvel Cinematic Universe (MCU) that shares continuity with the films of the franchise is the culmination of a series of interconnected shows from Netflix and Marvel. Marco Ramirez is the showrunner of this series and is produced by Marvel Television in association with ABC Studios, Goddard Textiles, and Half Fingers, Inc.

The limited series stars award-winning American actress Krysten Ritter (Jessica Jones of Marvel’s Jessica Jones/ Lucy Hayden of The Hero/ Dr. Mary of Mission Control/ Patty of She’s Out of My League/ Cassie of Woke Up Dead/ Lucy of Gilmore Girls) as the badass girl on the team Jessica Jones who has super strength; Black American actor Mike Colter (Luke Cage of Marvel’s Luke Cage/ Miles Lathem of Agent X/ Luke Cage of Marvel’s Jessica Jones/ Lemond Bishop of The Good Wife/ David of American Horror Story/ Colonel of Men in Black 3/ Malcolm Ward of Ringer/ CIA Tactical Leader of Salt/ Big Willie Little of Million Dollar Baby/ Watts of ER) as Luke Cage, a man with super strength and unbreakable skinBritish actor Finn Jones (Danny Rand aka Iron Fist of Marvel’s Iron Fist/ Ser Loras Tyrell of Game of Thrones/ Deputy Sorrel of Leatherface/ Barrow of Sleeping Beauty/ Martin of The Last Showing/ Jamie of Hollyoaks/ Santiago Jones of The Sarah Jane Adventures/ Julian Bell of Life in Squares) as Danny Rand aka Iron Fist,  the only child of the billionaire owners of Rand Enterprises who became the chosen protector of K’un-Lun and sworn enemy of the Hand; award-winning British actor Charlie Cox (Matthew Murdock aka Daredevil of Marvel’s Daredevil/ Tristan Thorn of Stardust/ Jonathan Hellyer Jones of The Theory of Everything/ Ishmael of Moby Dick/ Lorenzo of The Merchant of Venice/ Josemaria Escriva of There Be Dragons) cast as a blind lawyer by day and a crime-fighting vigilante at night known as Daredevil, or they call him by locals as The Devil of Hell’s Kitchen.

The miniseries also also casts an Australian actor Eka Darville (Diego of The Originals/ Pietros of Spartacus: War of The Damned) who reprised his role as Malcolm Ducasse, a junkie who was controlled by Kilgrave in Marvel’s Jessica Jones; American actor Elden Henson (Lenny of The Butterfly Effect/ Gunnars of Deja Vu/ Pollux of The Hunger Games: Mockingjay Part 1 & 2) reprised his role as Foggy Nelson, a lawyer who is also Matt’s bestfriend; English actress Jessica Henwick (Nymeria Sand of Game of Thrones/ Jessica Pava of Star Wars: The Force Awakens) also reprised her role as Colleen Wing, Danny Rand’s love interest who was raised by The Hand; Black-American actress Simone Missick (Jade of Jinn/ Grace of American Koko) also reprised her role as Misty Knight, a police officer who helps The Defenders; award-winning actress Deborah Ann Woll (Jessica Hamby of True Blood/ Karen Page of Marvel’s The Punisher/ Lila of Ruby Sparks) reprised her role as Karen Page, Matt’s ex-girlfriend who used to work with him and his bestfriend Foggy; ten times award-winning American actress Rosario Dawson (Gail of Sin City/ Emily Posa of Seven Pounds/ Abernathy of Death Proof) as Claire Temple, a nurse who medically aids The Defenders; American actor Scott Glenn (Jack Crawford of The Silence of the Lambs/ Ezra Kramer of The Bourne Ultimatum/ Wise Man of Sucker Punch) also reprised his role as Stick, the teacher of Matt and Elektra, who was a member of The Chaste. Australian actress Rachael Taylor (Maggie Madsen of Transformers/ Zoe of See No Evil) played the role of Trish Walker, Jessica Jones’ bestfriend.

Jessica Jones, Luke Cage, Danny Rand aka Iron Fist, and Matthew Murdock aka Daredevil, team up against The Hand. The Hand were five fingers of the “Yami no Te” (Dark Hand) composed of monks from K’un-Lun of The Order of the Crane Mother who became heretics when they used the knowledge and teachings of the Chi to discover a method to cheat death. These five heretics are Alexandra Reid, Madame Gao, Bakuto, Murakami and Sowande.  Alexandra Reid is played by 26 times award winning American actress Sigourney Weaver (Ripley of Aliens/ Dr. Grace Augustine of Avatar). She revived Elektra Natchios, played by French actress Elodie Yung (Elektra of Marvel’s Daredevil/ Hathor of Gods of Egypt) to become The Hand’s ultimate weapon known as Black Sky. A reprised role of Madame Gao is played by twice award-winning Hong Kong actress Wai Ching Ho (Chinese woman of The Sorcerer’s Apprentice/ Bernice of Robot Stories). Puerto Rican actor Ramon Rodriguez (Leo Spitz of Transformers: Revenge of the Fallen/ Joe Peck of Need for Speed) played the reprised role of Bakuto, Colleen Wing’s sensei. Japanese actor Yutaka Takeuchi (Hashimoto of USS Indianapolis: Disaster at Philippine Sea/ Aki of East Side Sushi) played the role of Murakami. Nigerian actor Babs Olusanmokun (Mace of Gotham/ Gary of Where is Kyra) also played the role of Sowande, one of the five members of The Hand.

The Defenders premiered with the full season of 8 episodes in New York on July 31, 2017, and was released on August 18, 2017 on Netflix. The review aggregator website called Rotten Tomatoes reported a 74% approval rating with an average rating of 6.49/10 based on 77 reviews. According to the site, Marvel’s The Defenders further develops well-known characters in an action-packed arc whose pay-offs more than enough of a punch to offset its flaws. Cox and Yung were named as TVLine’s “Performers of the Week” for the week of August 20, 2017, for their performances in the episode “The Defenders”. The site described that their final fight as “an emotionally compelling two-hander” and “a lovers’ quarrel like no other”, with Cox bringing warmth to the scene and Yung being “brutally blunt” with her line deliveries.

In October 2017, Netflix revealed that The Defenders was the third-most “Binge Raced” series globally, and first in South Korea, of their original series. According to Netflix,  “Binge Racers” are members who watched the entire series within 24 hours after its release, and that data accommodated “for time zones and is reflective of a show’s launch within 24 hours of a country’s release.” The Defenders is the final miniseries of the initially ordered Netflix series, after Daredevil, Jessica Jones, Luke Cage and Iron Fist. So no updates yet if there will be a season 2 for this miniseries.

Marvel’s The Defenders is really worth-watching especially if you are an avid fan of Marvel Comics. From people with normal lives to a group of justice-upholding group of vigilantes, these Defenders have their own style of fighting bad guys who are secretly hiding their lair down below the depth of Midland Circle. With Jessica Jones’ strong punches, Luke Cage’s invincible skin and strength, Iron Fist’s massive destroyer fist, and Daredevil’s advanced senses and agility at fighting, what else can you look for? This is a bunch of superb superhero characters all rolled into one.