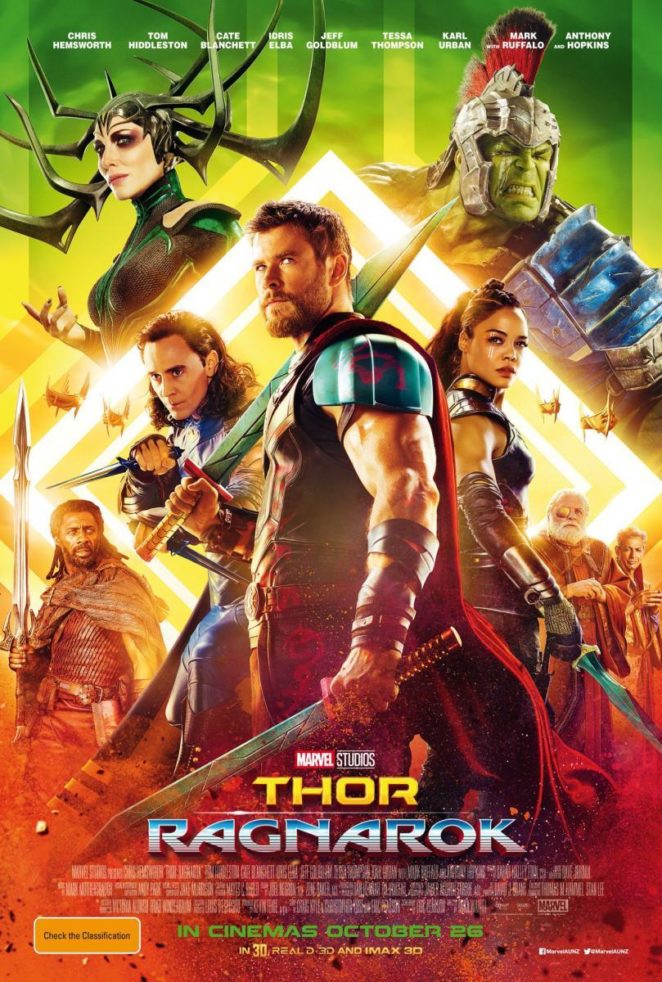 Thor: Ragnarok is a 2017 American superhero film produced by Marvel Studios and distributed by Walt Disney Motion Pictures. Based on the Marvel Comics character Thor, this film is the sequel to 2011’s Thor and 2013′ s Thor: Dark World, and currently the 17th film in MCU (Marvel Cinematic Universe).  The film is directed by New Zealander director Taika Waititi, with screenplay by Eric Pearson, and the writing team of Christopher Yost and Craig Kyle.

The movie stars 10-time award-winning Australian actor Chris Hemsworth (Kevin of Ghostbusters/ The Huntsman of Snow White and the Huntsman/ Thor of Avengers film series/ Owen Chase of In The Heart of the Sea/ James Hunt of Rush/ Stone Crandall of Vacation/ Curt of The Cabin in the Woods/ George Kirk of Star Trek) as Thor himself, a Norse god of thunder who has the heroic heart; Golden Globe and 5-time award-winning English actor Tom Hiddleston (James Conrad of Kong: Skull Island/ Thomas Sharpe of Crimson Peak/ Laing of High Rise/ Hank Williams of I Saw the Light/  Freddie Page of The Deep Blue Sea/ Capt. Nichols of War Horse) reprised his role as the Norse god of mischief and Thor’s brother Loki; 2-time Oscar and 149-award-winning Australian Actress Cate Blanchett (Carol Aird of Carol/ Stepmother of Cinderella/ Nancy of Knight of Cups/ Various of Manifesto/ Valka of How to Train Your Dragon/ Galadriel of The Hobbit and Lord of the Rings trilogy/ Irina Spalko of Indiana Jones and the Kingdom of Crystal Skull/ Marion Loxley of Robin Hood/Elizabeth I of Elizabeth) played her role as the antagonistic first born of the Supreme god of Valhalla, Odin, as Hela; Golden Globe and 22-time award-winning English actor Idris Elba (Commandant of Beasts of No Nation/ Krall of Star Trek: Beyond/ Stacker Pentecost of Pacific Rim/ DCI John Luther of Luther/ Kent of Guerilla/ Charlie Jaffrey of Molly’s Game/ Roland of The Dark Tower/ Ben Bass of The Mountain Between Us/ Max of 100 Streets/ Fluke of Finding Dory/ Shere Khan of The Jungle Book/ Chief Bogo of Zootopia/ Heimdall of Avengers: Age of Ultron/ Nelson Mandela of Mandela: Long Walk to Freedom/ Janek of Prometheus/ Moreau of Ghost Rider: Spirit of Vengeance/ Detective Winn of Prom Night/ Stone of 28 Weeks Later/ Tango of American Gangster/ Ben of The Reaping) played his role as the all-seeing all-hearing former sentry of the Bifrost Bridge — Heimdall; 9-time award-winning American actor Jeff Goldblum (David Levinson of Independence Day movies/ Krampf of Mortdecai/ Deputy Kovacs of The Grand Budapest Hotel/ Hiram Berry of Glee/ Ajax of Zambezia/ Zack Nichols of Law & Order: Criminal Intent/ Michael Raines of Raines/ Stewart of Man of the Year/ Professor Brody of Cats & Dogs/ Aaron of The Prince of Egypt/ Ian Malcolm of Jurassic Park movies/ Ichabod Crane of The Legend of Sleepy Hollow)  played his role as the vicious Grandmaster in the planet of Sakaar;  11-time award-winning American actress Tessa Thompson (Bianca of Creed/ Samantha White of Dear White People/ Charlotte Hale of Westworld/ Chris of South Dakota/ Brit of Salt Water/ Jackie Hollis of War on Everyone/ Diane Nash of Selma/ Sasha Doran & Laurel Harris of 666 Park Avenue/ Rebecca Taylor of Heroes) played her role as the fallen Valkyrie who fought back again Hela; 8-time award-winning New Zealander actor Karl Urban (Bones of Star Trek/ Eomer of The Lord of the Rings/ Strode of Acts of Vengeance/ Detective Ruiney of Hangman/ Gavin of Pete’s Dragon/ Detective John Kennex of Almost Human/ Vaako of The Chronicles of Riddick/Judge Dredd of Dredd/ Black Hat of Priest/ Ghost of Pathfinder/ John Grimm of Doom/ Kirill of The Bourne Supremacy/ Munder of Ghost Ship/ Julius Caesar of Xena: The Warrior Princess and Hercules: The Legendary Journeys) cast as Skurge, an Asgardian warrior who guards Bifrost in the absence of Heimdall; 29-time award-winning American actor Mark Ruffalo (Hulk of The Avengers film series/ David Schultz of Foxcatcher/ Dylan Rhodes of Now You See Me/ Mike Rezendes of Spotlight/ Cam Stuart of Infinitely Polar Bear/ Chuck Aule of Shutter Island/ Inspector David Toschi of Zodiac/ Adam Stanton of All The King’s Men/ Pappas of Windtalkers) played his crossover role as the lost Avenger named Hulk, an alter ego of a scientist Bruce Banner, who was stranded on the planet Sakaar for 2 years; Oscar winner and 48-time award-winning Welsh actor Anthony Hopkins (Hannibal Lechter of The Silence of the Lambs and Hannibal/ Alfred Hitchcock of Hitchcock/ Sir Edmund Burton of Transformers: The Last Knight/ Hagen Kahl of Collide/ Dr. Robert Ford of Westworld/Methuselah of Noah/ Sir John Talbot of The Wolfman/ Hrothgar of Beowulf/ Judge Irwin of All The King’s Men/ John Quincy Adams of Amistad/ Riochard M. Nixon of Nixon/  played his role as King of the Asgards Odin, and a father of Hela, Thor, and Loki; and 31-time award-winning English actor Benedict Cumberbatch (Shere Khan of Mowgli/ Sherlock Holmes of Sherlock/ Dr. Stephen Strange of Doctor Strange/ Smaug of The Hobbit trilogy/ Khan of Star Trek/  Maj. Jaime Stewart of War Horse) played his crossover role as Dr. Strange, a master of mystical arts.

The film narrates the story of Thor, how he met Hulk and the fallen Valkyrie named Brynhildr in the planet of Sakaar and how to escape in that planet to save Asgard from Hela and the impending event to happen — the foreseeing Ragnarok.

The movie was premiered in Los Angeles on October 10, 2017, and released in the United States on November 3, 2017 in 3D, IMAX, and IMAX 3D. With just a production budget of $180 million, the movie still did great and received largely positive reviews. In fact, it earned a whooping $852.7 million worldwide grossing income, making it the highest-grossing film of Thor series and the 8th highest-grossing film of 2017. The review aggregatorwebsite Rotten Tomatoes has reported a 92% approval rating based on 318 reviews, with an average score of 7.5 out of 10. Their critical consensus reads,

“Exciting, funny, and above all fun, Thor: Ragnarok is a colorful cosmic adventure that sets a new standard for its franchise – and the rest of the Marvel Cinematic Universe.”

While Metacritic, another review aggregator site, used a weighted average and assigned a score of 74/100 based on 51 critics, indicating “generally favorable reviews.”

Audiences polled by CinemaScore gave the film an average grade of “A” on an A+ to F scale, making it as the best of Thor series and the 12th film from MCU to earn the score.

This movie had won Idris Elba “Outstanding Supporting Actor” in a Motion Picture in the NAACP Image Awards for his role as Heimdall.

Lastly, on my own insights, this movie indeed brought out the culminating event and the imminent menace among the Norse gods at Valhalla, the Ragnarok. If you love Norse mythology, then this film will surely delight your area of interest. I give 9/10 for this movie since the fight between Surtur and Hela is not that long enough to suffice the meaning of Ragnarok, but I did still enjoyed the movie when it comes to graphics, costume and the humor that mundane is not a word to describe by watching this film. One of the best among Thor films. Must-watch and you’ll see the difference.