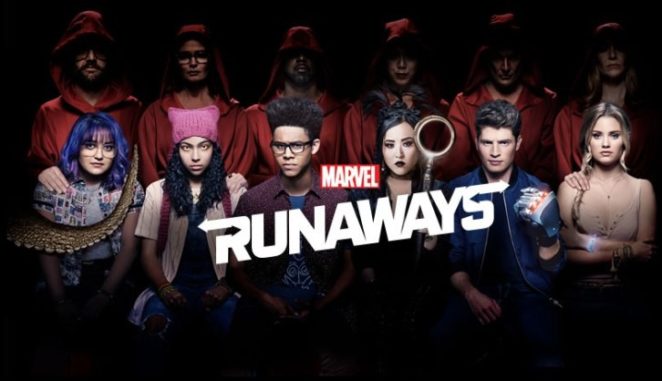 Marvel’s Runaways, or simply Runaways, is an American web TV series based on the Marvel Comics superhero team of the same name. This series is created for Hulu, an American subscription video on demand service owned by Hulu LLC, a joint venture with The Walt Disney Company, 21st Century Fox, Comcast, and Time Warner. Josh Schwartz and Stephanie Savage are show-runners of the said show.

This series is set in Marvel Cinematic Universe (MCU) that shares the continuity with the films and other TV series of the franchise. ABC Signature, Fake Empire Productions, and Marvel Television are the producers for this series.

The series is all about the six teens from different backgrounds who together they have united against their parents, who are members of a group known as Pride. The six teens were known as Runaways collectively. American actress Virginia Gardner (Christina Raskin of Project Almanac/  Lexy Bloom of The Gardners/ Anna of Tell Me How I Die) played the role of Karolina Dean, an alien passing as a teenager, burdened by her religious upbringing, who wants to pursue her own desires and instead of following in her mother’s footsteps. She has the ability of flight, glow with rainbow-colored light, and shoot beams of light potentially blinding others. American actor Rhenzy Feliz (Aaron of Teen Wolf/ Spencer of Casual) played the role of Alex Wilder, a nerd who longs to reunite with his childhood friends, with a high intellect and a member of the Runaways.  Japanese-born American actress Lyrica Okano (Little Oshota of Ikenshu: To Kill With One Blow/ Kim of Pimp/ Chrissy of The Affair) played the role of Nico Minoru, a Wiccan who isolates herself with her gothic appearance who wields The Staff of One, that can able to control anything she can imagine. American actress Ariela Barer (Jasmine Escalante of ER/ Maria of All Kid’s Count/ Esther Pendragon of Gortimer Gibbon’s Life on Normal Street/ Carmen of One Day at a Time) played the role of Gert Yorkes, A riot girl, and a social activist, and a member of the Runaways who also has a telepathic link with her genetically engineered dinosaur which she called Old Lace. Two-time award winning British actor Gregg Sulkin (Liam Booker of Faking It/ Randy of White Frog/ Seryozha of Doctor Zhivago/ Bernie Reubens of Sixty Six/ Will Wagner of Avalon High/ Flapper of The Giant King/ Frank Rowan of Camilla Dickinson/ Wesley Fitzgerald of Pretty Little Liars/ Drew Fraser of Another Me/ Dylan Carson of Affluenza/ Sam Fuller of Don’t Hang Up/ Lorne of Deported/ Derek Lowe of Status Update) played the role of Chase Stein, a high school lacrosse player who is often dismissed as a dumb jock but displays brilliance in engineering. He is depicted as having the potential to be as much of a genius as his father is, and builds gadgets powerful weaponized gauntlets called “Fistigons. American actress Allegra Acosta (Blanca of One Halloween/ Julie of American Girl) played the role of Molly Hernandez, the youngest member of the Runaways who is characterized by her positive attitude. She  has superhuman strength and invulnerability, which she lately discovered by herself.

The first season was released from November 21, 2017 to January 9, 2018. The series was ordered officially by Hulu on last May 2017. It has 10 episodes for its first season and second season has been renewed just this January 2018. Season 2 will have 13 episodes.

According to the review aggregator website known as Rotten Tomatoes, they reported that there is an 83% approval rating with an average rating of 7.63/10 based on 52 reviews. The website’s consensus also reads, “Earnest, fun, and more balanced than its source material, Runaways finds strong footing in an over-saturated genre.” On the other hand, the other reviewer aggregator known as Metacritic, which uses a weighted average, assigned a score of 68 out of 100 based on 22 critics, indicating “generally favorable reviews”.

Joseph Schmidt of ComicBook.com, whilst reviewing the first two episodes of the series, praised the show for its faithfulness to the comics, but also for some of the changes it made, appreciating the increased focus on the parents. He thought the cast portraying the Runaways was “pretty spot on”, but to him “many of the parents are scene stealers”, highlighting the performances of Marsters, Wersching, and Pardue.

Well, for me, this series has lots of stories to tell coz there’s this human sacrifice, parents who just use their kids for their own vile intentions resulting to teens’ rebellion. For me, not good for early teens to watch since it involves minor cult activities, but it’s up to their free will. I strongly recommend a parental guidance for this series, yet anyhow, this series is still a good depiction of how teens nowadays must aware of the current happenings in the society especially human trafficking. The runaway teens here are the chosen ones who are very well aware of what’s going on to the society that even their parents can be vile and have something to hide their infamous schemes unbeknownst to them.

This series has still the potential as it is currently rated as 7.5/10 in the IMDB (Internet Movie Database), an online database of information related to films, television programs and video games, including cast, production crew, fictional characters that gives official ratings based on surveys, critics, et al.

Still I strongly recommend this series to be watched especially those who are avid fan of Marvel Comics. I can give 5 star-rating and two thumbs up for this series. Try to watch this too guys, and who knows, you might like this series too.

If you haven’t seen this series yet, check out its trailer below:

Disclaimer: Some information are copyright sources from Wikipedia.