Black Panther is a 2018 American film about a superhero based from Marvel Comics character of the same name. It is the 18th film in the MCU (Marvel Cinematic Universe) and produced by Marvel Studios and Walt Disney Studios Motion Pictures for distribution. Screenplay was written by Joe Robert Cole  and directed by Ryan Coogler. This film was premiered on January 29, 2018 in Los Angeles, and was released theatrically on February 16, 2018 in the US, in 2D, 3D, IMAX, and other premium large formats.

Wesley Snipes who once cast in the film as titular character Blade expressed in working on a Black Panther film in 1992, but the project didn’t come to fruition. Marvel Studios announced a Black Panther film in September 2005 that it will be one of the 10 based on Marvel characters to be distributed by Paramount Pictures. Then soon afterwards in January 2011, Mark Bailey was hired to write a script. In October 2014, Black Panther was announced and Boseman made his first appearance as the character in Captain America: Civil War (2016). Cole and Coogler had joined by 2016 and additional cast joined in May, making Black Panther the first Marvel film with a predominantly black cast. Principal photography took place at EUE/Screen Gems Studios in the Atlanta metropolitan area, and Busan, South Korea from January to April 2017.

The movie is cast by 3-time award-winning American actor Chadwick Boseman (Jackie Robinson of 42/ Thurgood Marshall of Marshall/ Thoth of Gods of Egypt/ Jacob King of Message from the King/ Graham McNair of Persons Unknown/ Nathaniel Ray of Lincolns Height) who also played same role in the aforementioned Marvel film Captain America: Civil War and in the Marvel superheroes crossover film — Avengers: Infinity War. Boseman played the lead role of the Black Panther himself aka T’Challa, the king of the African nation called Wakanda. He gains an enhanced strength by ingesting the heart-shaped herb. In this film, his sovereignty was challenged by a new adversary upon returning home after he failed his mission to capture the murderer who killed his father King T’Chaka.

Oscar award-winner for Best Supporting Actress in a 2013 film 12 Years a Slave and 48-time award-winning Mexican actress whose father born from Kenya, Lupita Nyong’o (Patsey of 12 Years a Slave/ Maz Kanata of Star Wars: The Force Awakens/ Nakku Harriet of Queen of Katwe/ Raksha of The Jungle Book) played her role as Nakia, T’Challa’s former lover and an undercover spy for Wakanda placed in other countries to complete missions known as War Dog. 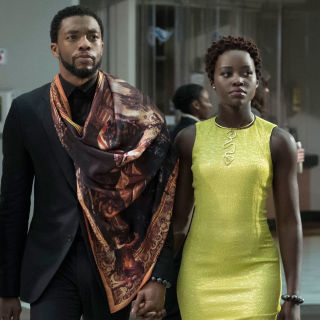 Three-time award-winning American actress Danai Gurira (Okoye of Avengers: Infinity War/ Zainab of The Visitor/ Michonne of The Walking Dead/ Jill of Treme/  Afeni Shakur of All Eyez on Me) played her role as Okoye, a traditionalist from the Border Tribe and an “extremely proud” Wakandan who is the head of the all-female special forces of Wakanda called Dora Milaje. She also serves as T’Challa’s bodyguard. 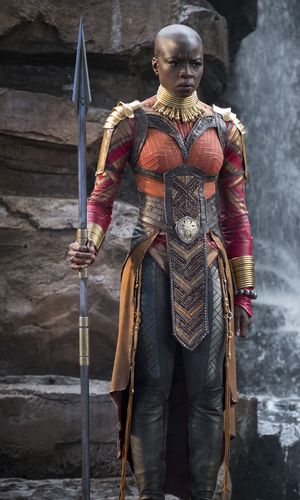 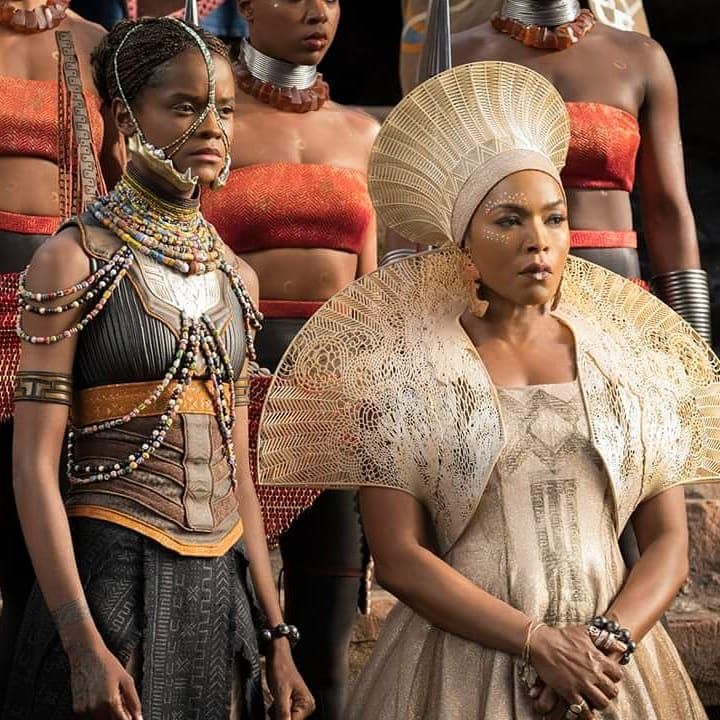 Golden Globe nominee and 9-time award-winning English actor Martin Freeman (Bilbo Baggins of The Hobbit/ Dr. John Watson of Sherlock/ Everett K. Ross of Captain America: Civil War/ Phil Rask of StartUp/ Lester Nygaard of Fargo/ Tim Canterbury of The Office) played his role as Everett K. Ross, a former liaison of its Joint Counter Terrorism Task Force and a member of the Central Intelligence Agency. Golden Globe nominee and 38-time award-winning English actor (Caesar of Planet of the Apes/ Baloo of Mowgli/ Snoke of Star Wars/ Ulysses Klaue of Avengers: Age of Ultron/ Gollum of The Lord of the Rings & The Hobbit/ Captain Haddock of The Adventures of Tintin/ Kong of King Kong) played his role as Ulysses Klaue, a South African black-market arms dealer, smuggler and gangster. 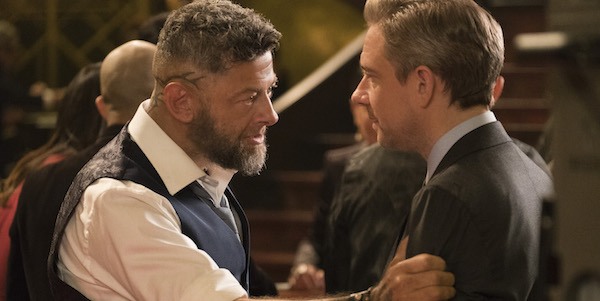 Tobagonian actor Winston Duke (M’Baku of Avengers: Infinity War/ Dominic of Person of Interest/ Zahir Zakaria of The Messengers) played his role as M’Baku, the leader of Wakanda’s mountain tribe, the Jabari, who is known to be ruthless and powerful, and who are in protest to T’Challa being the new king. 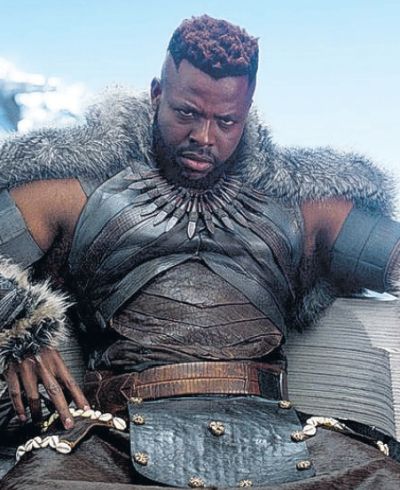 Oscar Best Actor for the movie The Last King of Scotland as Idi Amin and 55-time award-winning American actor Forest Whitaker (Cecil Gaines of Lee Daniel’s The Butler/ Ker of Battlefield Earth/ Coloner Weber of Arrival/ Saw Gerrera of Rogue One: A Star Wars Story/ Curtis Ames of ER/ Jon Kavanaugh of The Shield) played the role of Zuri, the keeper of the heart-shaped herb and an elder statesman in Wakanda. 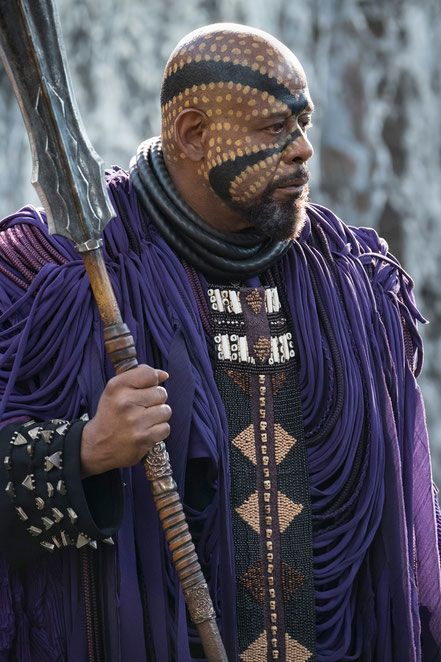 Oscar nominee and 14-time award-winning English actor Daniel Kaluuya (Reggie Wayne of Sicario/ Chris Washington of Get Out/ Agent Tucker of Johnny English Reborn/ Mac of The Fades/ Barclay of Doctor Who) played his role as W’Kabi, the head of security for the Border Tribe, serving as the first line of defense for Wakanda. He is confidant to T’Challa and his best friend too. Nineteen-time award-winning American actor Michael B. Jordan (Human Torch of Fantastic Four/ Adonis Johnson of Creed/ Oscar Grant of Fruitvale Station/ Reggie Porter of All My Children/ Alex of Parenthood) played his role as Erik “Killmonger” Stevens,  a U.S. black-ops soldier who seeks to overthrow his cousin T’Challa. He is the son of N’Jobu, King T’Chaka’s brother. 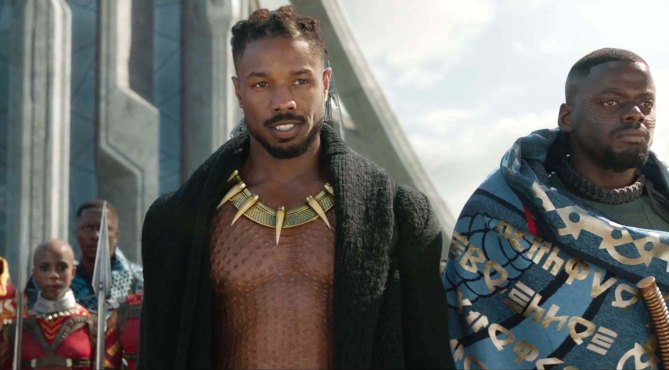 Golden Globe winner and Primetime Emmy Award for Best Performance in a TV series and Outstanding Lead Actor in a Drama Series entitled This Is Us, becoming the first African American actor to win his category in the award show’s 75-year history, and 12-time award-winning actor Sterling K. Brown (Randall Pearson of This Is Us/ Christopher Darden of American Crime Story/ Roland Burton of Army Wives/ Agent Higgins of The Mentalist/ Detective Cal Beecher of Person of Interest/ Gordon Walker of Supernatural/ Agent Rance of Alias/ Bob Harris of ER) played his role as N’Jobu, T’Chaka’s brother and Killmonger’s father, who is a War Dog sent to America.

South African actor John Kani played his role as T’Chaka, the father of T’Challa and former king of Wakanda, who was killed by Ulysses Klaue. 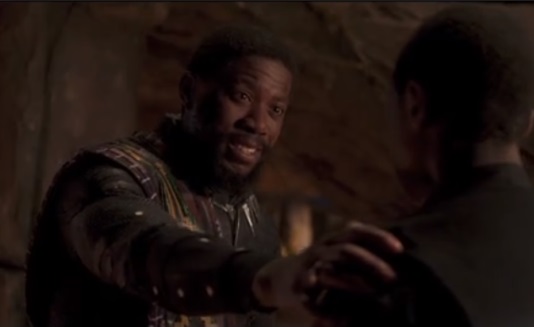 Continuation on Black Panther: My Movie Review (Part 2 of 2)