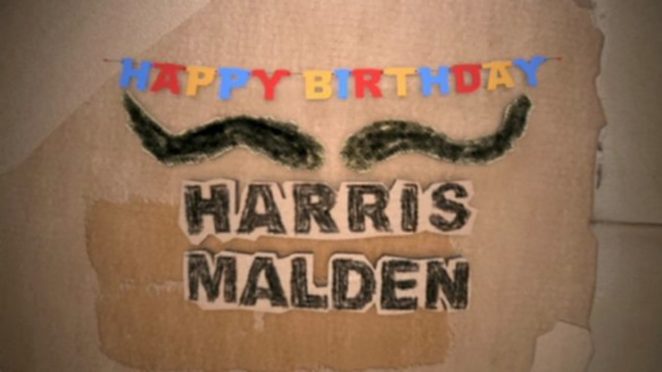 Happy Birthday, Harris Malden is about a twentysomething young man named Harris Malden who walks around with a fake mustache on his face.  The mustache may resemble Salvador Dali’s signature handlebar one day and the next he may be sporting a Van Dyke; what most people mistakenly refer to as a goatee.  Nobody mentions the fact that Harris’ facial hair is not real. It is taken for granted.  Until the girlfriend of Harris’ best friend blurts out that his mustache is not real.

And then all hell breaks loose.

If Happy Birthday, Harris Malden were just about what happens when Harris must face the reality of his wonderfully constructed façade, it would be a great movie. But then there’s the absolutely hilarious subplot of Melvin Malden becoming a model. The scenes during this subplot are so perfectly scripted and delivered and filmed that guys like Michael Bay and James Cameron and Peter Jackson should be forced to view them continuously with their lids pinned open, Ludivico Technique style. There is more truth in the Melvin Malden is a model scenes in Happy Birthday, Harris Malden than in all the Bay, Cameron, and Jackson movies combined, The Frighteners excepted. And yet that truth, like so much truth, is couched in a distancing comedic caul.

Can you really make a brilliant film about a guy being told that his mustache isn’t real? It seems unlikely, but then again it’s not really about a guy being told that his mustache isn’t real. The opening sequence with Harris Malden going to his best friend’s office to apply for a job with a resume that he points out is written in cursive and with the date of his birth highlighted in red because, well, it’s his birthday, sets the tone.  Nick Gregorio mostly plays this scene by himself and in his manners and delivery he creates a character who you think is going to belong in the same line as Mollymauk from Lord Love a Duck or Murray Burns from A Thousand Clowns. This guy is going to be a non-conforming iconoclast, you think.

But at that birthday party, just before the girlfriend blurts out the truth to Harris, you learn that Harris isn’t quite in that league. There is a reason for Harris wearing his fake mustaches that goes beyond non-conformity. Way beyond it. What Happy Birthday, Harris Malden is about is not simple non-conformity, it is about confronting the challenge of new worlds to conquer.  Harris Malden’s mustache is façade that covers up profound emotional scars and admitting that the mustache is not real is the same thing as admitting that the scars have not healed.

Healing is the subject here as much as moving on.  I would say that Happy Birthday, Harris Malden should be viewed by conservatives too afraid to move beyond their compartmentalized world based on hiding behind their own false mustaches, but it would probably do no good.  The average Harris Malden in real life would deny the girlfriend’s claim that what is false is not real, just the way conservatives insist that what is patently false is real. (Barack’s birthplace was just the tip of that iceberg, apparently.)  Of course, you don’t have to be conservative to prefer the false to the real and to insist upon the verisimilitude of the irreproachably counterfeit. Look around you every day and you will see dozens, hundreds or even thousands of Harris Maldens walking around you wearing distinctively fake mustaches.

Just be very careful about pointing out this fact to them.

Then fire up your Roku, put Happy Birthday, Harris Malden in your queue, and curse theater chains for handing over five different screens to junk like The Faster I Go The Furiouser I Are  instead of wonderful surprises like this great little film.