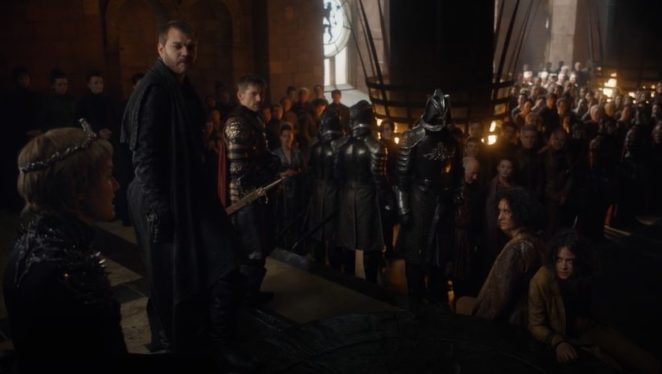 This third episode of Game of Thrones’ Season 7 entitled “The Queen’s Justice” is really memorable since it’s the reunion of each two different big characters. But, you need to continue reading my review to unveil the epitome of the scenes that I have watched on this third episode.

Here are the sequential events that occurred on this episode:

1. Jon Snow and Ser Davos Seaworth arrived at Dragonstone with Tyrion Lannister, Missandei and the rest of the Dothrakis welcoming them at the coast. One of Daenerys’ three dragons passed by flying overhead at Jon Snow that made them startled as they went to the gate of Dragonstone.

2. Melisandre stood at the cliff while seeing the arrival of Jon Snow and Ser Davos until Lord Varys came to him and asked her why. She confessed to Lord Varys about the terrible mistakes she made why she parted from Jon Snow. She told Varys that she will go to Volantis, when Varys told her not to come for she won’t be safe at Westeros. Melisandre then told him her last words that she will die protecting Westeros just like Varys do. Then Varys was flummoxed and pacified by her last words that he regarded as a probable soothsaying from Melisandre, which he himself got a little frightened.

3. Daenerys and Jon Snow met each other at the hall. Both sides were expostulating to serve each other’s purpose why they meet. Daenerys begged Jon Snow to bow before her for an allegiance against Cersei, whilst Jon Snow refused for he wants her to joined his alliance against the Army of the Dead marching up north. The arguments were at armistice when Varys came to Daenerys telling her of the arrived grave news that the Greyjoys and Ellaria Sand with her Sand Snakes are dead or captured.

4. Theon Greyjoy was hauled out of the ocean by an unnamed Ironborn soldiers. He told them that his sister Yara was captured by Euron.

5. Ellaria Sand with her daughter Tyene were presented by Euron at the Iron Throne fulfilling his sworn words as two gifts for Cersei. He left the two with Yara in his claim.

6. Cersei showed her revenge while Ellaria and her daughter were chained as prisoners at the cell. Cersei kissed her daughter with a poison, letting Ellaria see her suffer as what she did to Myrcella, Cersei’s daughter whom she had poisoned for a revenge of killing her lover Oberyn Martell by the Mountain aka Ser Sandor Clegane, Cersei’s sworn protector. After Cersei kissed Tyene, she drunk an antidote given by her Hand named Qyburn, then left the two in their utmost miseries.

7. Cersei asked for a fortnight to a head representative of Iron Bank and sworn to him that her debts will be paid in full, just to back her up for a coming war.

8. Jon Snow told Tyrion to leave when they were talking at the cliff, but Tyrion asked Jon Snow what he really wants. Tyrion opened up Jon Snow’s main purpose whilst discussing to Daenerys. He told her that he wants to mine the dragonglass to use against White Walkers. She allowed him to mine it when Daenerys talked to him  for the second time just to build up a relationship for alliance as what Tyrion told her to do so.

9. Petyr Baelish aka The Littlefinger is playing mind games to Sansa Stark at the Castle Black, telling her that everyone could be her enemy or a friend. Until, someone told her that someone has arrived at the gate. She met her long lost brother Brandon Stark and hugged them that much.

10. Bran Stark and Sansa Stark talked each other at the redwood where the Night’s Watch swear their oaths. He told her that he became the Three-Eyed Raven, that he could see the past and the future events, which made Sansa a little bit worried.

11. Jorah Mormont felt somewhat cured and Archmaester Ebrose confirmed it. Jorah thanked Samwell Tarly for getting him cured. Ebrose then talked to Samwell, that what he did was forbidden and that no one had ever done it before successfully.

12. Tyrion discussed the Casterly Rock’s secret passage to Daenerys. While the Unsullied led by Grey Worm infiltrated Casterly Rock thru the secret passage, they successfully invaded inside the house, only to find out that only a few of Lannister soldiers left on that day. Grey Worm saw his ships attacked by Euron’s fleet by throwing them fires. Tyrion told Daenerys that Cersei is prepared for this event that might happen.

13. Jaime Lannister with Randyll and Dickon Tarly arrived at the Highgarden’s House Tyrell with the best and huge number of the Lannister soldiers from Casterly Rock marching.

14. Olenna Tyrell seen them afar coming to infiltrate the House Tyrell, with herself ready to face the grave consequences.

15. Jaime Lannister defeated all the soldiers at House Tyrell. He went to Olenna’s room where she waited for him. They both have some small conversation against each other. Olenna told Jaime that Cersei is a disease, whereas Jaime defended his sister. He gave Olenna a poison to her drink, making her drink the wine, and telling her that instead of capturing her or beheading her at the King’s Landing, he would gladly let her drink the poison as the least painful death for her. Then after she drunk all the wine, she told him that she must tell Cersei that she was the one who poisoned their son Joffrey.