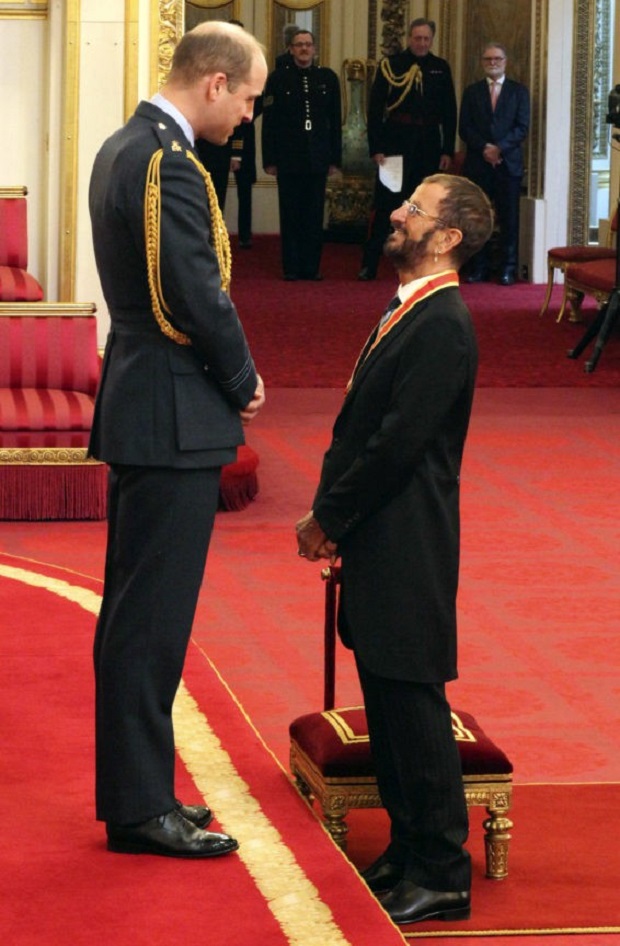 Former drummer of one of the most famous British rock and roll bands of all time Ringo Starr who was born Richard Starkey, 77, received one of the highest honors any citizen of Great Britain dreams about in his lifetime.

Ringo on Tuesday at Buckingham Palace was knighted as Sir Richard Starkey by Prince William on Tuesday. Starr joins his mate guitarist Paul McCartney who was knighted by Queen Elizabeth II in 1996 even though the ceremony was in 1997.

Ringo replaced former Beatles drummer Pete Best in 1962. His dream after the break up of the Beatles broke out their act in 1970 besides having a successful career in the recording industry was to be knighted in his native Great Britain before he would leave us.

Ringo as a drummer was underrated compared to drummers of other rock and roll bands of the era where the Beatles were very popular.

While the late George Harrison was nicknamed “The Quiet Beatle” since he liked to keep quiet as a a member of the group, Ringo is known as “The Eccentric Beatle” due to his personality of acting like he is having a great time playing music in front of crowds with the “All Starr” Bands that he tours with these days.

What makes me wonder is if the late John Lennon who died in 1980 in New York City at the hands of a fan who was jealous of his success and the late George Harrison who passed away in 2001 due to throat cancer if they were alive today would they have been knighted?

I will never know. However with Ringo now being knighted by Prince William, it brings Ringo back full circle since he remembers when and his Beatle band mates performed for the Royal Family in the 1960s.

Congratulations to Ringo Starr for being knighted by the Royal Family in his native Great Britain. It will be a feather in his hat to remember for the rest of his days.