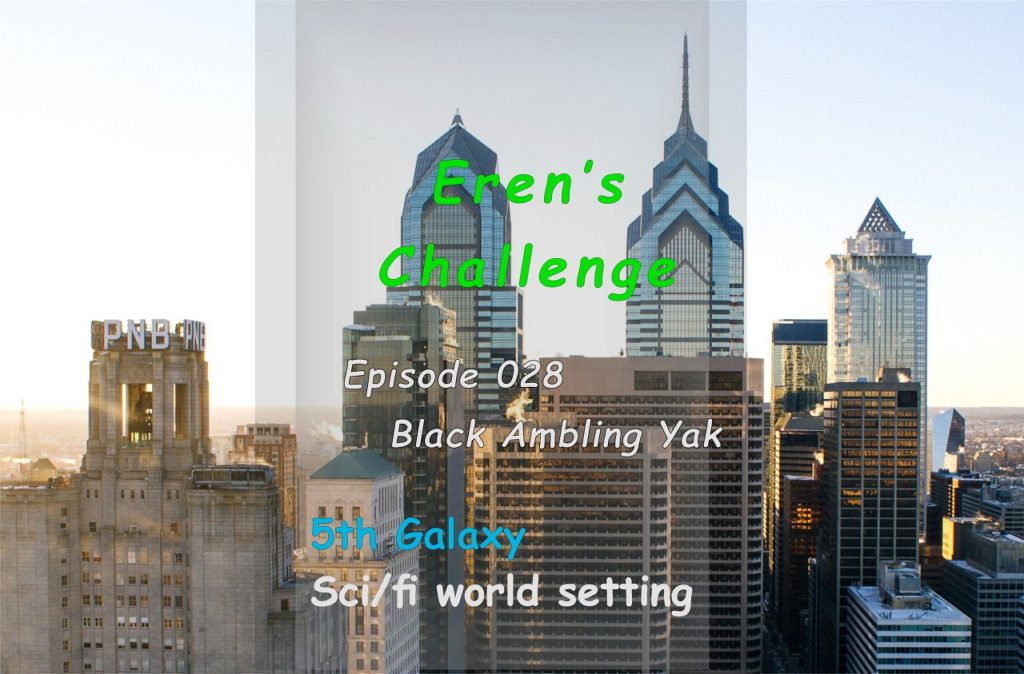 Answering the incoming call, I up look over at the wall TV monitor. I don’t recognize the old man I see in the upper right-hand corner of the screen. He appears to be well over a hundred years old. “Yeah! Hi, how can I help you?”

The geezer coughs, then he utters, “Eren, let’s cut to the chase! You have the ears of people we have issues with, and we received your number as someone to contact … I was nominated to arrange a meeting with you to talk over our issues! … you game?”

Looking over the man searching for any insignia markings, I see a plainly dressed citizen with no body markings or jewelry. There is nothing remarkable about what he’s wearing either, he has on a serviceable gray button-down short-sleeve shirt with a white t-shirt underneath. I say, “depends! … who’s asking?”

He nods to me once, dropping his chin to chest then up again as he looks across the screens to me, “Black Circle!”

I cough roughly a few times. “I think I can arrange time!”

He snorts in a rude fashion, then remarks, “make time!”

I hear my stereo speakers make two sharp beeps, I know it was Omega and her message. “When?”

He squints as he peers into the cam. “Who’s there?”

I shake my head, “No one. It was my timer alarm warning me I have a meeting at five.”

He nods. “Okay … be at the location on the twenty-first, which we send you. We’ll send that email to you on the twentieth with the place to meet.” The screen goes black with no departing words.

I lay with Es pondering events as she cuddles next to me on our queen size bed.

I am frustrated and confused as I’m supposed to be dead, but already nine different semi-important to important folks have called upon me, mostly at my home. I believe my mentor, that equally rough humoured quantum beast, Omega, is guiding people to me.  I think she groomed me to be her ambassador, but shit! Why me?

The giant golden hound bitch walks into her office on her two hind-legs, bold as bricks. She summoned me last night to be here to meet with her early this morning.

Unhrah has both of my firearms and the two daggers that I let her know about.

I watch Angel strut over to her desk of bright white poly as I stand by the entry. The desk is barren, stark with only the two glaring built-in monitors of her computer and security systems on its surface. No papers or artwork or other desk items.

She sits with casual ease and points to one of the other three chairs across from her at the desk.

I oblige and crawl up onto the closest white oak seat, a gnoll size desk chair built for the comfort of an eight-foot-tall large humanoid beast.

Sitting and observing each other quietly, I wait for her patiently.

Eventually snorting, the dog blinks a few times when she drawls out, “you spoke with Vespa!”

She starts to grin, but then relents by dropping her lips, she says, “Black Circle’s leader, Vespa!”

The bitch snorts again. “No games Eren! … I track your com calls. When you receive the email, you’ll forward a copy to me.”

I laugh heartily before replying, “you can just import copies from my server host, why do I need to forward a copy?”

She winks once, before she says, “we haven’t intruded into your email’s server host. Out of courtesy to you … may we?”

I blink a few times, and then utter, “you’re serious? You offered that respect to me?”

I nod to her. “Feel free, just clean out the junk mail while you’re at it!”

She chuckles benignly, then replies, “that service will cost you!”

We both chuckle after I give a haughty reply, “figures.”

Laying together on our soft livingroom sofa as we watch some odd music reality show I haven’t paid much attention to for at least two commercial breaks, Es turns to me with straight lips and tight eyes, and she says, “I have something I need to talk with you about!”

I click the mute control on the remote and silence the TV.

She takes my hand tightly as she looks into my eyes. “I have news that may or may not sound good to you! … I’ve missed my monthly cycle by two weeks now. I’ve booked an appointment with the Doc for the 24th.”

A hum buzzes over the stereo speakers.

She clears her electronic voice with a whining snort, before she says, “I can save you both some nerve-wracking waiting!”

Sitting up straight, Es looks around wide-eyed, asking, “who?”

I chuckle, then say, “no worries, Es. This twit is my nemesis/mentor/teacher/frustrater who helped me save you from the Trump. You don’t recall her as she purged your memories of the events while you were in the Ambassador’s estate manor’s lab. As she did with Tol as well … she haunts us day and night … go ahead, Omega dear.”

A clearly humal mature female chuckles, then in a more professional doctor like tone. “Thank you, Sweet Boy … Esmelda, after analyzing your waste excretions over the last three weeks, I’ve determined you’re with, what appears to be likely identical … but my dear you’re having triplets.”

Es freezes, with her breathing almost quitting as her chest stops moving, I’m not sure, but as I gaze into her face it appears a smile starts to eke onto her lips as tears start to build in both her eyes, then she asks, “can you tell? … boys, girls?” As she starts to breathe rapidly.

Me? My breathing goes deep and then shallow as I consider what this means for the four of us in our household. All of us, Tol and his girlfriend, Kya, also with Es and me. Having three more to house and feed! There’s no room in this house! I need to build a new one!

I accidentally mutter, “we need a new home!”

Omega chuckles, and obliquely offers, “as the Trump, you think this is an issue? … you own a huge mansion outfitted with extensive underground labyrinths … just by default.”

Blinking harshly multiple times, Es scrunches her forehead and tightens her brows. “What?”

I shrug, and say, “really Omega? They’ll just let us live in there in peace?”

Groaning frustrated, through my stereo speakers, Omega replies, “I’ll send you an architect then … tomorrow.”

Es clasps her hands tightly together under her chin while grinning hugely, as she asks, “really?”

I nod as Omega replies, “yes!”

To be continued in the next Eren’s Challenge episode 028, part two,  …