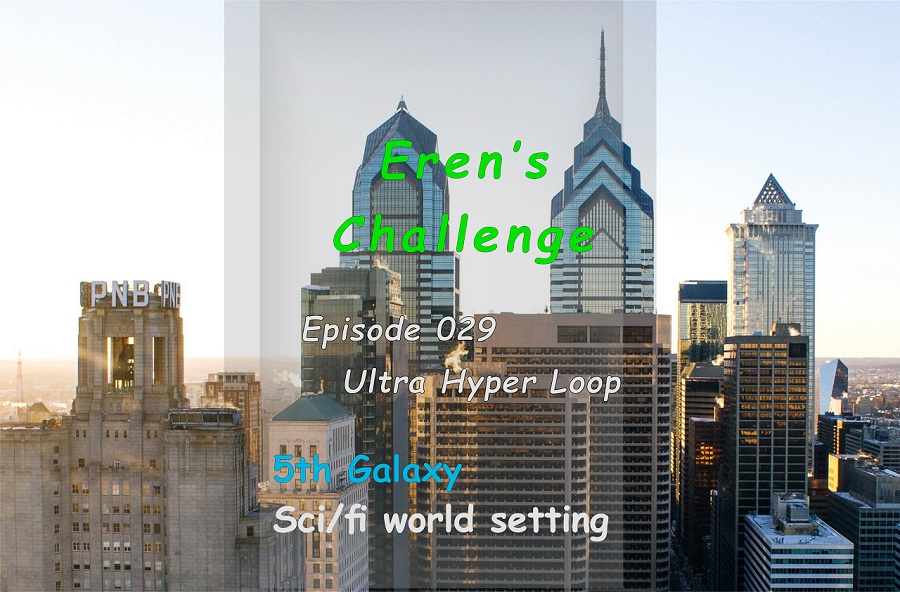 “WHAT! –” I jolt up in bed as my stereo blares an alarm as loud as an air-raid siren.

Both of us burst out of bed and rapidly dress, and then we head down to our muster point in the cellar.

There we find the monitors displaying a hyper loop terminal station platform.

I read the location displayed. It’s the platform three blocks south from here and there visible on the display is Kya in conflict with three male humal.

“Turn on the volume, Omega!” I screech.

Kya remains silent and standing in as non-threatening stance as possible.

Another man shouts, “yeah! … you don’t even speak our language, you stupid bitch! Go home where you belong!”

There is a crowd gathering around the four of them as the confrontation is escalating.

Es speaks up, “Omega can you summon the City Watch to help her?”

The commanding sultry mature female voice of Omega erupts from the stereo. “Done already, Dear … a few seconds ago.”

We watch as one of the men pushes Kya.

She simply takes a step back, keeping her hands down low. I had discussed her skills with her, in regards to her security job with the gnoll Bull, Jut.

I admit I’m a little worried about this.

A man pulls out a knife as he says, “I’m going to cut you up, so you don’t dirty our world or corrupt my kids.”

One of the men throws a punch at Kya.

She side-steps the blow and snarls as she backs away again.

The crowd, ‘ohs,’ in response.

The man who threw the punch tries another punch.

This time Kya strikes out quickly in retaliatory defence, knocking him back.

As the brawler is knocked away, a less skilled smaller man tried to kick Kya, missing wildly.

Right beside him comes in the man with the knife, with a result of Kya twisting away from the strike.

Stepping back, taking her well-practiced gnoll martial arts stance, obviously resigned to seeing this through, Kya growls at the men.

Again, the puncher throws his fist at Kya, this time she strikes his chest, knocking the wind out of him.

The third man who obviously has little fighting skills tries to come in behind the gnoll, but he is thrown over her by the security officer.

The gnoll is cut on her arm by the knife-wielding man, and she replies by knocking his arm away harshly.

Taking a more aggressive approach as she’s outnumbered, Kya leads the attacks now, striking back at the unskilled attacker as he bruises her ribs.

Swinging around quickly, she is rewarded by her strike knocking unconscious the first brawler.

Then with her follow-through, she bounces the knife wielder back as his knife glances off her armoured coat.

In blazing speed, she follows through with an attack on the incoming unskilled attacker, knocking him unconscious.

As the knife wielder is recovering from Kya’s last repulsion of him, he is knocked unconscious by the gnoll.

This is all in what seems like about six minutes of conflict, with the result that there are three unconscious humal males on the hyper loop terminal platform and a slightly bleeding female gnoll.

An event which is posted at 4:58 a.m. on social networks is touted on social media this early morning as the ‘Ultra Hyper Loop Conflict.’

It has about a 50/50 split online response in favour for the alien.

Omega keeps the feed going to Es and me as Kya administers first-aid to the three men, making them comfortable.

The City Watch detains Kya for over an hour-and-a-half but oddly excuses her after obtaining her references and contact details.

Then the distracted gnoll catches the 7:01 a.m. transport to downtown, to report for work with Angel’s Bull, Jut.

Sitting around our table as we eat the meal I guided Es in preparing this evening, we’re grilling Kya about her escapade this morning.

She responds to my question. “Yes, and Lieutenant Unhrah summoned me to her office when I arrived … the old matriarch interrogated me for two hours about the event. She’s decided that I’m to be chauffeured to and from work from now on.”

I look over at Tol to observe his reaction, but he’s fawning over her still, after having learnt about the incident.

We hear the double stereo beep of Omega when she wants to speak.

Startled, the gnolls look around as Tol and Kya don’t know about her yet.

“You know you haven’t shared Es’ news! But Kya has news she hasn’t shared yet either because she’s unaware of it … may I?”

I chuckle as I peer into Es’ eyes and raise my brows.

We turn to the other two who are staring at us with their mouths gaping open in awe and eyes wide.

Both Es and I chuckle and then I utter loudly, too loud. “Go for it you beast! … you know you want too!”

There is the soft music of harps playing suddenly in the background, then slowly drum rolls ease in. There are thirty seconds of this, and a mature matron’s voice begins, “fine family of mine, you will now be aware that our sister, Esmelda is with child, and is going to give birth to two boys and a girl … as far as I can determine … I also inform you that our sister, Kya is with pups as well and should give birth to one bull and six bitches. I am proud to be Pampamoo to you all. Such is my first love!”

I’m confounded! A computer feeling? “Omega! Are you spouting rhetoric? Or do you actually love us? And what is this Pampamoo?”

A cooing comes from the speakers as the crazy person tries to comfort us, then she speaks again, “I said I love, Them! … nothing about you, Eren! … a Pampamoo is a gnoll’s respected matron, old mother, their grandmother!” She burst out in laughter.

Well, ok, she is officially off her rocker!

I’m driving in my new Royal-blue, Feel Escape SUV sedan, headed away from my home to the pickup point for the four Black Circle leaders. We’ll be on our way to meet Captain Chase when Omega signals me in my earbud with her commanding two beeps.

She giggles in her schoolgirl manner. “Hey, you have to abort this meeting.”

She snorts in my ear. “Chase plans on arresting the four.”

I hit my brakes, screeching the Feel to a halt, thinking rapidly. “Hey, the Red Rundle! Is there a room not rented?”

I smile and start driving again. “Book it!”

To be continued in the next Eren’s Challenge episode 029, part two ‘Ultra Hyper Loop,’ …