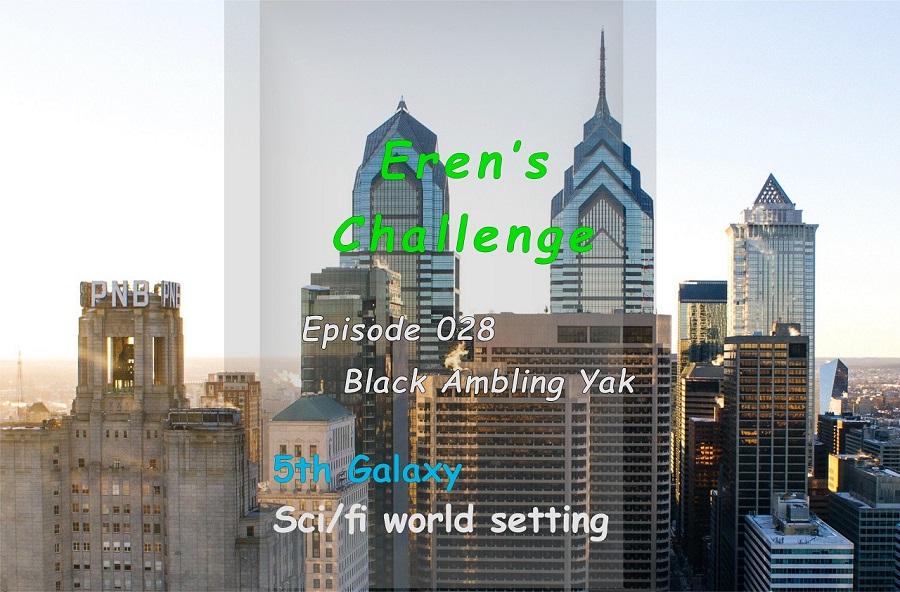 I watch the herd of large black yaks’ amble across the old dirt road in the dim, cloudy mid-day light of our star, Obal.

Out of curiosity and to kill time as the herder moves the bovines, I count the domestic beasts. I finish, finding a count of thirty-seven yaks.

Nearly twenty minutes later the herder has the last one off the road, having them out of my way so that I can drive onward toward the old keep at the top of the low stone hill in the woods north of Goral’s suburbs.

I drove all night and a good part of today to get here, to arrive by six pm.

Arriving at the rich-multicoloured stone-work of the dressed-stone of this ancient fifty-foot high keep which covers nearly an acre-and-a-half of the top of the hill, I pull to a stop in the outer courtyard. Then I get out to march across the drawbridge into the inner yard.

Waiting for me inside are three royal marine style mercenaries, armed with high-powered laser carbines.

Their leader confiscates my 11-mm firearm and the two daggers which they discover on me.

I then follow one of the three inside the keep proper, this is all done without a word being spoken.

Inside the keep the two of us climb a broad intricately carved stone staircase to the third floor, walk along a wide hallway, and enter a chamber of an austere room with brightly painted orange wooden floor, ceiling and walls.

The room only contains five old scrapped up wooden chairs and an old scarred wooden table.

Waiting there sitting on four of these chairs are four angry looking humal males dressed in all black, including the old man, Vespa.

Well? So far so good! Right?

I stand just inside the chamber doorway … waiting.

My escort closes the door as he leaves, no words having been exchanged.

Then after a couple minutes, Vespa silently points to the empty chair.

Now, I’m patient, efficient, one not into wasted actions, but this! Ridiculous!

I sit quickly and lean forward to rest my elbows on the table, then rest my chin cupped in my hands. I flippantly utter, “well?”

Obviously upsetting the four with my lack of respect, the younger male leaps up to stand.

Keeping my chin cupped in my hands I raise my eyes to look up to his face at his over six-foot height.

He appears to be almost thirty.

Now having done my homework with Omega, I address him. “Well Loren, you seem to have an issue! Speak your thoughts!”

Flabbergasted by this, the four of them sputter as they try to gather themselves.

I throw another wrench into the room by addressing the others as well using Omega’s information. “Tol, how’s your girlfriend? She graduated this spring, and I hear she’s been accepted into Yester University’s business program … Casper, congratulations on your daughter’s engagement to Todd. And Vespa, what about those seven great-grandchildren? Now with the newest one, Kenra … right?”

Then about two minutes later, Vespa recovers first, with almost screaming, “you’re so smart, Eren … why are you here?”

I stand and start walking a circle around them. “That’s easy! … you want peace with Friends and the City Watch … you’re losing ground, and there are too many people against you to maintain your status quo! So, you were offered an opportunity to negotiate peace and your taking it … though reluctantly you’re going through me!”

Leaping around, Loren shouts, “your full of shit! … which one of you gutless shits have been feeding this turd information on us?”

Seeming to be the calmest one, Casper gestures for Loren to sit and he says, “Loren sit down and shut up. I told you! He is the Challenge, who is the Trump, who gleans information on everyone in the world and uses that information when it suits him! He chose to read up on us this time.”

I tap Casper on his shoulder twice, then I pat his shoulder as Loren glares at me in hatred with his cheeks fanning in and out rapidly, with his breaths going through his nostrils as his lips are sealed closed tight.

I look around at each of them in turn, and say, “our friend Casper, pretty much covered it all. Now relax … if I was going to turn you in, we wouldn’t be sitting here now having this conversation … so, Loren relax and sit down you shit … let’s start with what you four are offering the City Watch.”

Eyeing me, Casper cordially asks, “are you going to suggest something to us?”

I lock eyes with him, asking, “would you like me too?”

He nods once while keeping our eyes locked.

I smile a strong cheek-to-cheek grin. “Okay … I might guide you by suggesting Black Circle pull out of Earl Ferrent’s East Dorset Fief while solidifying your blocks in Goral cities western districts … you would be granting the cities rent controlled contracts with only a 5% take cut, instead of the seven you’re pulling now … with the City Watch, they will then turn blind eyes on the cam monitors in those various districts and in the city core … that is if I were able to make the suggestion!”

Vespa slightly raises his hand off the table, and says, “we’d want the inspectors of the Dock’s Casinos to sign off on inspections blindly too … if we leave Ferrent’s Fiefs.”

I nod, which brings the first slight smile from the century-old man.

Not to be left out, Tol says, “okay, we agree on all of to that, but that leaves Friends who’ve been a pain in our asses for the last five Terms.”

I grin again and move to stand before him across the table, and I say, “you have blocked construction at the West Far Towers … you want peace, they want work to flow again peacefully and unblocked.”

Shaking his head, Tol, says, “no, they refused to pay our permit fees.”

I raise my hand slightly, and offer, “what if they agree to one percent?’

Suddenly leaning back, Tol stares at me. His mouth worked open and closed a few times as his eyes widen slightly, then he says, “you serious? … they’ll pay in my district?”

Holding my hand up with the palm facing to him. “They might agree to one percent for their full freedom to work. Then they’ll stop attacks.”

To be continued in the next Eren’s Challenge episode 028, part three, ‘Black Ambling Yak,’ …