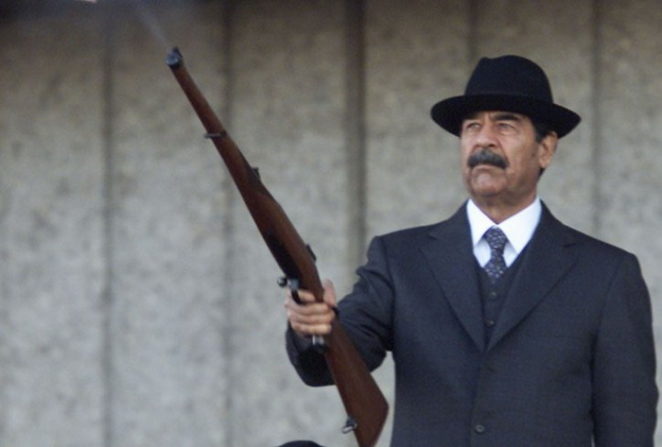 This article was published 10 years after his death. From https://bultimes.com on 18-12-2016. This is the third post in my series.

John Nixon was an analyst for the CIA. These days his book “Briefing for the President: Saddam Hussein’s Interrogation” came out. In it he describes the interrogations he has made to the Iraqi leader. It also reveals some rather awkward and unpleasant truths.

Here’s what he wrote in his book:

I had not slept for 27 hours, I was terribly exhausted, but my news struck me with such a dose of adrenaline as I had not experienced before. The Special Forces team had caught the man we called target number 1. They were drawn from a hole in the ground. He responded to the description. My CIA bosses baked me on grill, says the CIA expert.

Is it really this shy man Saddam Hussein, the ruthless dictator of Iraq? The most wanted man in the world. It was December 13, 2003. I’ve been in Iraq for eight weeks, a CIA analyst looking for traces to help capture Saddam and his assistants. I was then invited to meet Buzi Crondard, CIA Executive Director.

The war to overthrow the regime had lasted for nine months, but when it came to Saddam, we were constantly confronted with data like Elvis was spotted. So it was until the soldiers did not search a farm near Saddam’s home village. There they found a big bearded man hiding in a small underground bunker.

A group of high-ranking officers then interrogated me at Krondard’s office how I would identify him. I told them about the tribal tattoos on Saddam’s right hand, the bullet sign of his left leg and his lower lip, which fell slightly on one side. These things I learned from videos.

Krondard interrupted me and said we had to make sure he really was him, and not some of his counterparts. The myth of Saddam’s many counterparts was a joke in the intelligence circles, but I decided to keep silent. I then presented a list of questions that only the Iraqi leader could answer.

Saddam was a charismatic man. He was very tall and sturdy. Even as a prisoner who knew he would be executed, he emitted power in the room. I spoke first with the help of a translator: “I have a few questions about you. I want you to tell me the truth. You know?”. Saddam nodded. “When did you last see your sons alive?” I expected Saddam to resist, but I was amazed at his aggressiveness.

I saw his tribal tattoos and his lower lip. Now I had to see the bullet wound. There were many things we wanted to know. How did he escape from Baghdad? Who helped him? But he did not say, answering only the questions he wanted. “Why do not you ask me about politics? You will learn something from me, “he called out to me. He also strongly resented the attitude of the soldiers who had brought him here.

I was still disbelieving. He was a man who killed his own people without even thinking about it, and now he complains about a few scratches. He picked up the robe that had brought him to show a wound on his leg. I saw an old scar. Is that a wound of a bullet, I asked him. He responded positively with a growl. I had the last proof. We got him.

Ignoring his dangers, we asked Saddam whether he had ever thought of using weapons of mass destruction for a US military attack in Saudi Arabia. “We have never considered the use of weapons of mass destruction. It has never been discussed. To use chemical weapons against the world? Do not we crazy? Who will use these weapons as such have not been used against us? “He replied.

We did not expect to hear this at all. How then did the Americans go wrong? Saddam had the answer: “The spirit of hearing and understanding was gone. And I’m to blame for that. ” Did he not play us, distorting the truth to save his pride?

Speaking of the truth about the gales of Halabja, Saddam said, “It was a decision I did not take.”

For a number of years I had been studying Saddam, and I never doubted the information that his step-father from Tikrit was like a little boy. Many psychologists who analyzed it from afar said that it was because of the painting that Saddam became so cruel and wanted to have nuclear weapons. With the course of my interrogations, however, Saddam managed to turn my assumptions upside down, saying that his stepfather was the dearest man he knew: “Ibrahim Hassan – Lord bless him. If there was a secret, he would have said it first to me. I was more dear to him than his native son. “Saddam also quickly denied participating in the 9/11 attacks. “Look who’s involved. From which countries they came from. Saudi Arabia. Their leader, from Iraq? No. He was an Egyptian. Who do you think is involved in the attacks? “The Iraqi leader said. Saddam actually believed that the 9/11 attacks would bring the United States and Iraq closer because Washington would need a secular regime to help it fight fundamentalism.In the course of our conversations, we have often heard distant explosions. Saddam supposed that things were not going well for the Americans, and he was glad. “You will fail. You will understand that it is not easy to rule Iraq, “he said. The story proved he was right. “Because you do not understand language, history, and Arab thinking. It’s hard to get to know the Iraqis without knowing their nature and history. Differences are like night and day, summer and winter. That’s why they say the Iraqis are hard-headed because of the summer heat, “Saddam said.Saddam was executed at the end of 2006.In 2007, I was applauded at the White House. Bush asked me to tell him what a man Saddam was. I told him he was quite charismatic and self-critical. That bothered Bush. Then I quickly explained that the real Saddam was sarcastic, arrogant and sadistic. It calmed him down.He looked at Vice President Dick Cheney, and their eyes gathered as though they knew something. When I left the office, Bushse joked, “Are you sure Saddam did not tell you where he had hidden the anthrax tubes?” Everyone in the room laughed, but I think his joke was inappropriate. America lost more than 4,000 soldiers.