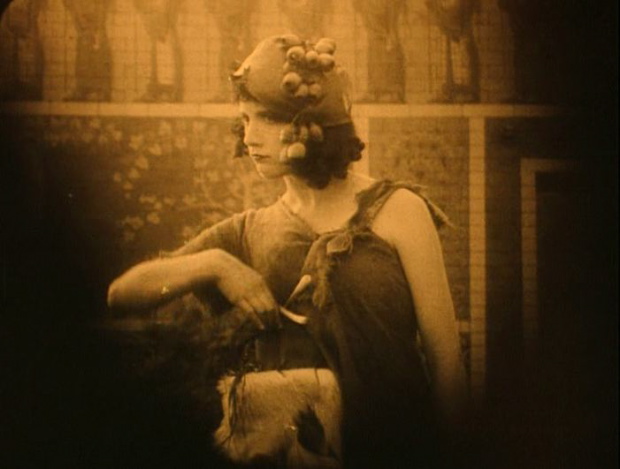 The chance to check out D.W. Griffith’s other–better and not just because inestimably less racist–silent masterpiece “Intolerance” gives moviegoers a chance to learn two things. One, nudity in films is a not a post-1960s invention. More importantly, those with a sharp eye could learn that not all silent film acting was melodramatic posturing marked by theatrical gestures and wild-eyed facial signals. Or, at least, they could have learned this by focusing on the parts of “Intolerance” dominated by the performance of Constance Talmadge.

Talmadge played the Mountain Girl in the storyline of D.W. Griffith’s epic that takes during the Babylonian Empire. Despite the storyline, or perhaps because of it, if you look at the movie through this perspective it seems inescapable that a point was being made. Talmadge’s Mountain Girl is the most modern female character in the movie. The joy of watching “Intolerance” which is a notably joyless film otherwise lies in that wonderful experience of finding something new in a movie that has been around for awhile.

Those who associate, and deservedly so in most cases, silent film acting with overstating the obvious will definitely have their eyes opened while laughing along with Talmadge’s subversively contemporary character. So unusually subtle is Talmadge’s performance that much of her motivations may depend upon the viewer’s perspective. An amazing thing about watching her sections of the film is the way that she may draw you in to thinking her narrative is going to lead her in one direction only to find that she was playing you.

It is a truly masterful comic performance in which Constance constantly surprises you even in the most throwaway of scenes. Be sure not to miss the tiny little segment where she’s teasing a goat or you will miss a terrifically funny shock of surprise. What is even more important not to miss are the scenes where the Mountain Girl slowly becomes empowered. The disgust and mistrust of those she has known before and the dawning admiration for the man who represents to her what her life could be is all right there in Talmadge’s big, expressive eyes.

It is a great comedic performance to be sure and maybe Talmadge is broadcasting the underlying and forgotten conceit that makes comedy work: you can’t trust it. Irony is a presence in all great comedy even if the comedic intention is decidedly more on the side of sincerity. Those coming to “Intolerance” in the scenes where Talmadge’s Mountain Girl first begins to adore Prince Belshazzar could interpret Talmadge’s extraordinarily facial expressions as those of a scheming con artist targeting her big score. This is as easy to do it is for those who have been following her story the whole time interpreting them as the signs of a woman falling under the spell of a rescuer.

The vitality of the entire epic rests almost single-handedly upon Constance Talmadge’s Mountain Girl who is the psychic grandmother such other comic-action heroines of present day as Xena, Warrior Princess and the attempt in 2017 to capitalize on Xena’s legacy by transforming Wonder Woman into something less Lynda Carter and more Lucy Lawless  Audiences at the time were clearly won over by Talmadge’s performance since the entire storyline of the Babylonian sections were used to create a standalone film. This experiment was marked most especially by the fact that in the standalone version Talmadge’s Mountain Girl does wind up becoming a tragic figure.