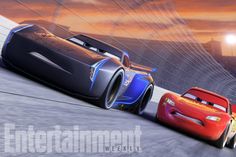 CARS 3 NEXT-GEN TAKES THE LEAD — Jackson Storm (voice of Armie Hammer), a frontrunner in the next generation of racers, posts speeds that even Lightning McQueen (voice of Owen Wilson) hasn’t seen. "Cars 3" is in theaters June 16, 2017. ©2016 Disney•Pixar. All Rights Reserved.

The third movie of the animated series of the “Cars” franchise will open this weekend. Since the movie is aimed  at youngsters and adults based on the popularity of auto racing, it is expected to beat out the “Wonder Woman” movie for the number one position in the theaters at the end of Fathers Day.

The “Wonder Woman” movie that has been very successful for the D C Comics franchise in the first two weeks since it opened in theaters to extremely popular reviews from fans and critics alike.

But every movie franchise can only stay in the top spot for only a short time before a new movie that has appeals to the masses takes over the top position in the American box office.

However Wonder Woman fans, do not fret. Being in second place in the box office report behind “Cars 3” bring up those famous sayings by the late George S Halas who was the former head coach of the Chicago Bears which is “Nobody who ever gave his best ever regretted it.”

Another slogan comes from former Baltimore Colts and Miami Dolphins head coach Don Shula who is famous for his quote “Success is forever and failure is not fatal.”

“Cars 3” is likely the last movie in the franchise trilogy. But then again, if the movie is a real box office success for Pixar studios, maybe just maybe a fourth movie cloud be made in the future.

As the cartoon character the Road Runner would say to the Wonder Woman “Beep beep. I am outrunning you to the top of the mountain sister. See you later.”