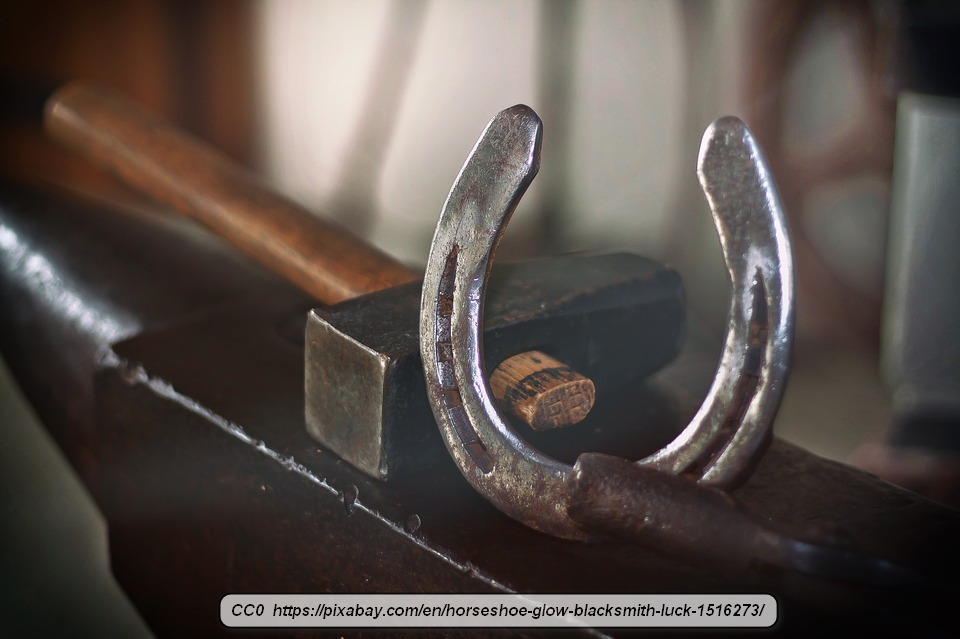 Horseshoes protect the hooves of horses. As tradition in many cultures has it, nailing a horseshoe above the front door or on the wall of a room is thought to bring good luck. Where did this superstition come from?

In minor part, the superstition has to do with the fact that iron was considered to be a ‘lucky’ base metal. It was also attached to the hoof with seven horseshoe nails, again by tradition, and seven was considered to be a lucky number. However, the reason horseshoes are supposed to be lucky is because of the Catholic Saint Dunstan, who at one point served as the Archbishop of Canterbury in about 960 A.D.

According to legend, St. Dunstan was an extremely talented blacksmith. The devil, having heard about Dunstan’s prowess, went to Dunstan with a business proposition. The devil wanted Dunstan to shoe his horse. The wily Dunstan agreed, but instead of shoeing the horse, Dunstan nailed the horseshoe on the devil’s cloven foot. This cause the devil intense pain and Dunstan agreed to remove the horseshoe…for a price. That price was that the devil had to agree not to bother the occupants of any home that had a horseshoe affixed to a wall or door. The devil, in agony, agreed to the terms and Dunstan removed the horseshoe.

Thus, the horseshoe became a symbol for luck because St. Dunstan was said to have outwitted the devil with a horseshoe. There is some disagreement regarding which direction the horseshoe is supposed to be pointed, though. Some people maintain that the ends should be pointed up so that the luck doesn’t run out. Others maintain that the points should point downward, so the luck will cover anyone in the home or who passes through the door.

Either way, this is a superstition that is based on Catholicism. Interestingly, though much of his life is supposition, St. Dunstan was indeed a craftsman and was trained as a silversmith, before becoming a monk. Perhaps Indexer could be persuaded to write an article about St. Dunstan.