Born in 371, Valentinian II was far too young to be anything but emperor in name when his father, Valentinian I, died on 17th November 375. His half-brother Gratian became the western emperor while Valens (their uncle)continued to rule in the east.

Valentinian II gained his anomalous rank of child emperor due to opposition in certain quarters to Gratian having sole control. This was led by Merobaudes (army commander in the Balkans) and Justina, who was the widow of Valentinian I and mother of Valentinian II. 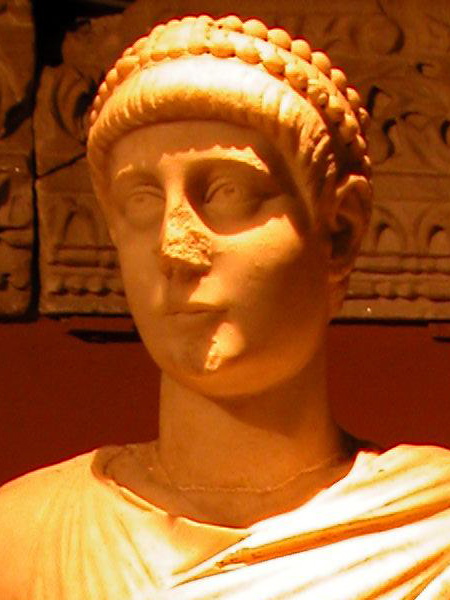 Valentinian therefore became the nominal emperor of Illyricum, Italy and Africa at the age of four, with the real power being held by Merobaudes and his mother. His life as Emperor was merely that of a figurehead, being used by those around him as a political pawn.

In 383 Magnus Maximus invaded Gaul from Britain and succeeded in deposing Gratian and replacing him as Emperor of Britain, Gaul and Spain. In 386 he moved into Italy, causing Valentinian and his mother to flee to Thessalonica to seek the help of the Eastern Emperor Theodosius (who had succeeded Valens in 378), who promptly invaded Maximus’s part of the Empire and captured and executed him.

Valentinian, now aged 15, was thus restored to his throne, with the Frankish general Arbogast left in effective charge when Theodosius returned to Thessalonica. Valentinian found himself under virtual house arrest in Vienne in Gaul. He clearly hated this arrangement and sent messages to Theodosius to complain about his treatment, although his protests fell on deaf ears.

Valentinian died on 15th May 392, aged 21, possibly from suicide or perhaps he was murdered by Arbogast. Whatever the cause, it was a sad end for a young man who never had a chance to prove himself or to lead a life that was at all fulfilling.

It does however appear that he played a part in the controversy within the Christian Church over Arianism. His mother Justina was an Arian (i.e. a follower of the doctrine propounded by Arius to the effect that Jesus did not exist before his physical birth, as opposed to the official Church view that God the Father and God the Son had existed for all time). By taking the side of his mother, Valentinian incurred the wrath not only of Bishop Ambrose and Magnus Maximus but also Theodosius. The latter took the view that Valentinian had brought his misfortunes on himself by denying the true faith.