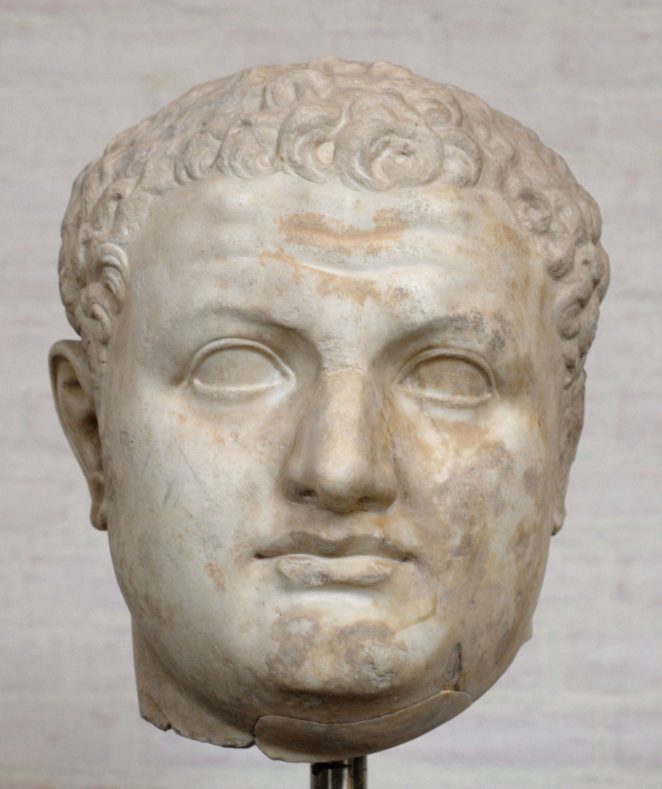 Titus is usually regarded as one of the better Roman Emperors, although his reputation among Jewish historians is seen in a very different light.

(The Triumph of Titus, by Sir Lawrence Alma-Tadema)

Titus Flavius Sabinus Vespasianus (known to us as Titus) had exactly the same name as his father Vespasian, so it is fortunate that history has chosen to refer to him by his praenomen. He was born on 30th December 40 AD.

He was clearly destined for a military career, and served with distinction as tribunus militum in Britain and Germany, before being given command of a legion and assisting his father in the Jewish wars in Palestine. When his father left for Italy in 69 AD to become Emperor, Titus finished the job in Palestine and was largely responsible, in 70 AD, for the destruction of Jerusalem that was regarded as a triumph in Rome but, among the Jews, as one of the greatest disasters in their history.

Titus returned to Rome in 71 AD to share the triumph with Vespasian and to assist in the work of government.

While in Palestine, Titus had become attached to Berenice, the daughter of King Agrippa I, and she eventually (in 75 AD) followed him to Rome, as did her brother, also named Agrippa. The idea of the next emperor (as always seemed likely) marrying a foreign princess did not appeal to the people who mattered in Rome, so Titus agreed not to marry her and sent her away when he became Emperor in 79 AD. This act may seem heartless to us today, but rulers often have to do things for political rather than personal reasons.

As the Emperor in waiting, Titus did not appear to be a promising prospect, given that his behaviour was not always of the best. His sexual morality was questionable to say the least, and the fear was that another Nero was on the way. However, it does not always happen that a dissolute prince becomes an unworthy king, and Titus was one of those for whom the trappings of office made a huge difference. He turned out to be one of Rome’s better-liked emperors, respected by all Romans both civil and military, much as his father had been.

(The Arch of Titus, erected in his memory by his brother Domitian)

One important action of his was to reform the legal system that had encouraged a network of spies and informants to bring treason charges against people who were personal enemies. Titus refused to listen to such claims and had the informants banished from Rome. He was prepared to exercise clemency, and no Senators were executed during his reign.

However, his reign was marked by disasters of other kinds, the most notable being the eruption of Vesuvius in 79 AD that buried the towns of Herculaneum and Pompeii, near Naples. Titus was active in helping the families of those affected by the eruption and trying to repair its ravages. The following year a fire at Rome lasted for three days and destroyed many buildings, including the Capitol and other public buildings as well as many houses. Titus sold some of his personal property to help raise funds for rebuilding. A third disaster was a plague that he also did what he could to mitigate.

Besides restoring buildings lost to fire, Titus completed the amphitheatre begun by his father that is now referred to as the Colosseum, and built the Baths of Titus. The opening of these buildings was marked by massive celebrations that lasted for a hundred days

However, his reign was a short one because he died of a fever on 13thSeptember 81 AD, at the age of 40, although some historians claim that he was poisoned by Domitian, his brother. At the time of his death he was extremely popular and he was greatly mourned as a result. However, it has been speculated that his popularity might not have had much longer to run, seeing that he was spending the wealth of Rome faster than it was being replenished, and he was much less careful with finances than his father had been. That said, the people of Rome soon had good cause to wish that Titus had lived a lot longer, given that the reign of Domitian was to prove far less comfortable.

(A scene from the Arch of Titus, which depicts his triumphs)