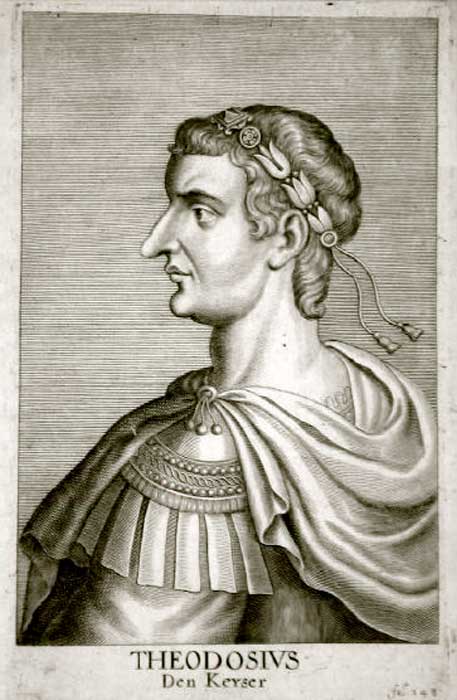 Emperor Theodosius I (born in January 347) was the son of another Theodosius, who was never an emperor. Theodosius the Elder had been Magister Militum (“Master of the Soldiers”) under Emperor Valentinian I, but had fallen victim to a plot hatched by a rival and been executed as a result, despite being innocent of any wrongdoing.

In 378 Emperor Valens, who ruled the eastern half of the empire, was killed in battle, and – after a short interregnum – the younger Theodosius was declared emperor by the soldiers in 379. Gratian, who ruled the western empire, did not object to this move, possibly out of a sense of recompense for past injustice, given that Gratian was the son of Valentinian I who had ordered the execution of Theodosius the Elder. Theodosius had already been favoured by Gratian with an appointment to take military control of Illyricum (the western Balkans). 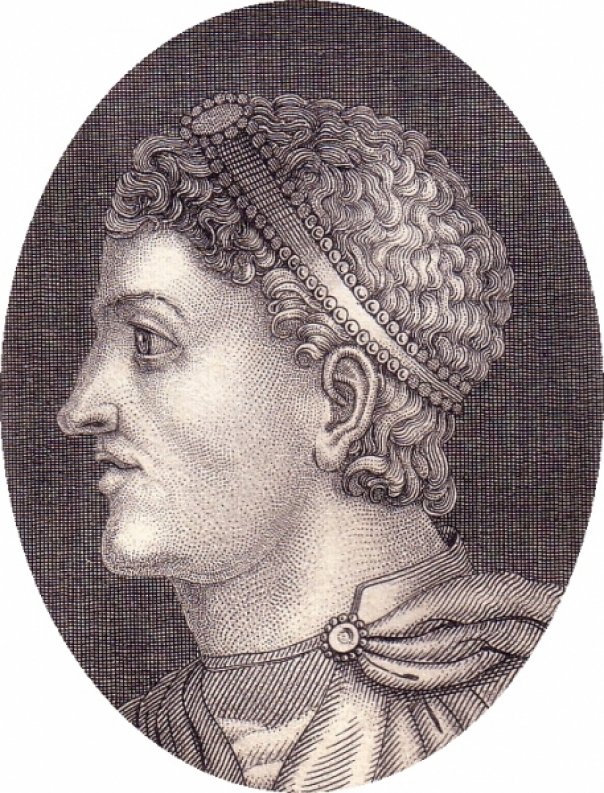 Gratian gave Theodosius considerable support during the early years of the latter’s reign, although Theodosius was wary of making too many claims on power until he had proved himself militarily. He therefore set up court at Thessalonica rather than Constantinople.

The main problem facing Theodosius at the outset was the incursion of Goths from the north. These tribes were seeking to establish communities within the Roman empire and they were prepared to take on the Roman legions if necessary.

After suffering a defeat at their hands in 380, Theodosius reckoned that his best move was to make peace via a binding treaty, which was agreed in 382. This allowed the Goths to settle lands in the Balkans that would be governed by their own chiefs, in exchange for a commitment to provide troops to serve under Roman command as and when required.

Despite Gratian’s initial support, Theodosius did not reciprocate. In 383 the usurper Magnus Maximus invaded Gaul, thus challenging Gratian’s authority. Gratian might have expected support from Theodosius, but this was not forthcoming. Instead, Theodosius recognized Magnus’s claim and only challenged him when he invaded Italy (nominally ruled by the boy emperor Valentinian II) in 386. In the meantime, Gratian had been killed (in 383) after fleeing from Magnus only to be caught up with at Lyons.

Theodosius defeated Magnus Maximus, and had him executed, in 388. Valentinian II then came under the control of Theodosius via the latter’s Magister Militum, a Frankish general named Arbogast. When Valentinian sought to depose Arbogast he paid with his life.

Arbogast wanted to take over from Valentinian (whose authority had extended over Italy, Africa and part of the Balkans) but was well aware that he would not be welcomed by the Senate at Rome due to being a German and a pagan. He therefore chose a senator named Eugenius to be his nominee.

Civil war broke out between Arbogast and Theodosius in 394.This was something of a war of religion, because Theodosius was a devout Christian and Arbogast placed his reliance on the old pagan gods. The deciding conflict in the war was the Battle of the Frigidus, fought on 5/6 September 394. The exact location of the battle has long been disputed, but it appears to have been in a river valley in what is now Slovenia. On the first day the battle honours went to Arbogast and Eugenius, but during the second day a strong Bora wind blew up the valley and this turned the tide in favour of Theodosius who later claimed that this was divine intervention in response to his prayers.

With Eugenius executed and Arbogast having committed suicide, the whole Roman empire was now under the control of a single emperor, but this situation proved to be not only short-lived but terminal – Theodosius was the last emperor to be able to make this claim.

Theodosius died in January 395 at the age of 49. His successors were his two sons, Arcadius and Honorius, who were aged 18 and 11 respectively at the time of his death. These young men would prove to be unworthy candidates for their posts, leading to the empire being subject to a period of chaos and conflict that was dominated by various guardians and advisers of the nominal emperors.