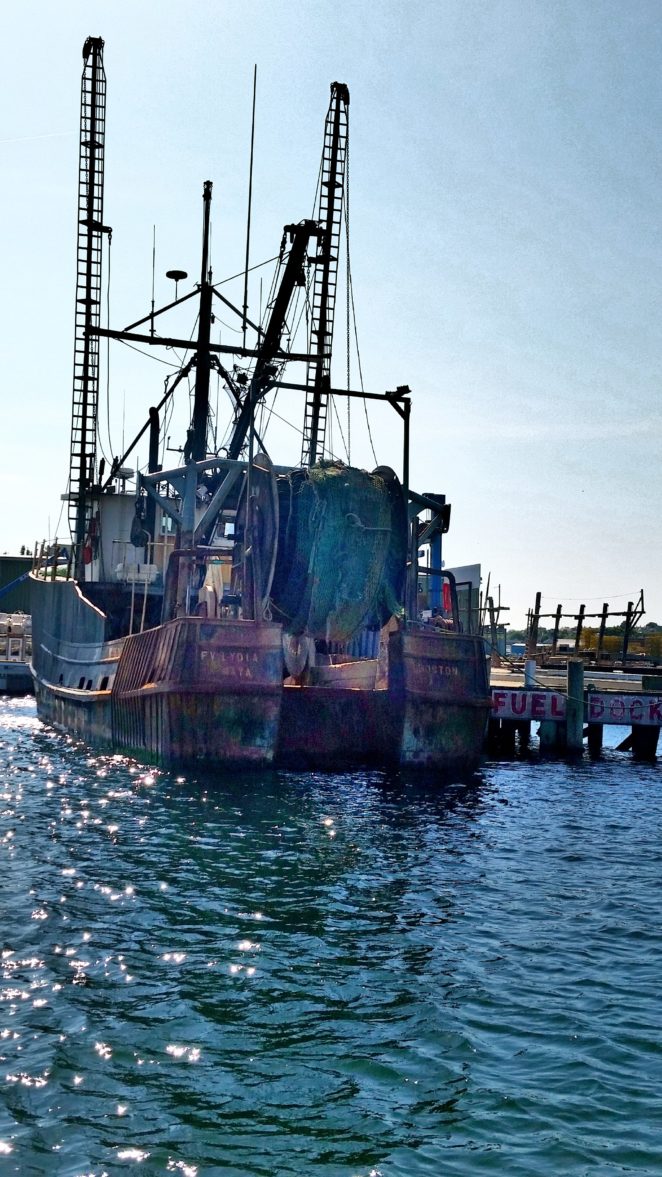 My dad was a fisherman who survived the sinking of 3 ships. The first boat went down in 1950, 8 years before I was born. I am told he resolved to never go fishing again.Jobs outside the fishing trade were hard to find in Gloucester back then. Before I was old enough to understand what was going on my dad had experienced two more terrifying sinking. After both of them he returned to fishing on another boat within a few  days.

From as early as I can remember each time my dad left to go fishing my mom, brothers, sister Evelyn and I would hug him and kiss him goodbye. We knew it might be the last time we’d see him in this world. My dad worked on boats that sailed to the plentiful fishing areas off the coast of Nova Scotia. He would be gone for two weeks at a time, and we had no way to contact him until he was close to shore. A handful of people had short wave radios and were able to talk to boats that were close to port.

In the late 1970s the Gloucester Fishing Fleet was going through hard times. Japanese and Russian factory ships had depleted the population of many North Atlantic fish species. The U.S. government attempted to respond to this situation by imposing a quota on fish…by weight. The quotas didn’t help conserve fish …excess fish were thrown away, which obviously didn’t help perpetuate the species. My dad said he wished that they would at least  let them donate the excess fish to food pantries but no one in Fisheries management was listening. Eventually many fishermen gave up. A few resorted to smuggling marijuana and a couple of boats ran guns to the Irish Republican Army. Others sank their aging boats for insurance, figuring the settlement was worth more than the grief of several more years struggling to eke out a living from the sea.

My dad was fishing on the trawler Tina Marie, owned by Felicia Oil Company. His skipper, Johny Quince had several conversations with his crew about the decline of fishing prospects and the skyrocketing costs of fuel and repairs. As gossip circulated about what route Quince might take, my dad confronted him. “If you ever think of running guns or drugs or sinking this boat for insurance,  count me out “.

One late summer afternoon in 1983 the Tina Marie set sail with one crew member missing: my dad. For the first time in years he had called in sick, saying his knee was bothering him. I had dropped in to visit and he fried some Steak Milano for dinner. We were watching the evening news when the telephone rang. My mom answered & called out, “Duke! Your brother Carlo is on the phone!” My uncle Carlo had turned his short wave radio and heard the Tina Marie had radioed the Coast Guard. It had caught fire and was sinking. Uncle Carlo didn’t know that my dad was not on board. Have was relieved to hear that Dad was safe at home. My uncle Serafino & Aunt Grace would be calling within the hour. All were  happy that dad was safe and sound.