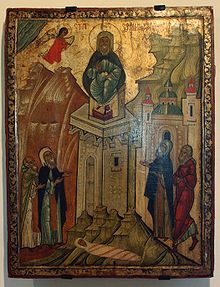 Patronage: apostates (persons who have left the Church); shepherds

People have done some rather unusual things in an attempt to live a holy life but, when the time comes that we Jesus returns and sets up His Kingdom in its fullness, I believe that Simeon Stylites will be in the top five for unusual, maybe even number one. While I wonder about his actions, I certainly don’t disparage his motives. He believed that God was calling him to this way of life. Maybe he was right.

Simeon was born in Sisan, also known as Sis, a village in Cappadocia (modern-day Turkey). His parents, Sisotian and Martha, were both Christians. Sisotian was a shepherd and, when he was 13 years old, Simeon began to help tend the flock.

Simeon’s conversion came when he heard the Beatitudes one day in church and was struck by their profundity. Recognizing his own spiritual immaturity he sought the help of an Elder who explained them to Simeon. Simeon decided he wanted nothing more than to serve God so, at the age of 18, he received the tonsure and joined a monastery.

At the monastery he lived such an extremely ascetic life that the igumen (abbot) told him to tone it down or leave. Simeon left. He found an empty well in a nearby mountain and moved into it. There he continued to live his extreme lifestyle. Angels appeared to the ignumen commanding him to bring Simeon back to the monastery but Simeon didn’t stay for long, moving to a cave near the village of Galanissa, near Aleppo in Syria, where he lived for three years.

He continued his extreme lifestyle taking up the practice of abstaining from food and water during the period of Lent. (If this is true, he had divine help to survive. Without it this would have killed him.) The igumen brought him bread and water but, a few days later, Simeon was discovered unconscious in his cell, the bread and water untouched.

Simeon’s behavior did draw crowds looking to receive healings or otherwise be edified. Simeon shunned worldly glory and just wanted to live in solitude so he set up a pillar about six or eight feet high with a small room on the top. He moved in and devoted himself to prayer and fasting. News of Simeon reached both the church hierarchy and the imperial court. Patriarch Domninos II (441-448) of Antioch visited Simeon celebrating Mass on the pillar.

Some of the elders living in the nearby desert decided to test Simeon, looking to see if his strange form of asceticism was pleasing to God. They sent messengers to him who were to tell Simeon to come down from the pillar. If he disobeyed, they were to drag him to the ground. If he was willing to submit, they would leave him on his pillar. Simeon was humbly obedient so the monks told him to stay where he was, asking God to be his helper.

Simeon underwent and passed many temptations, relying on God rather than himself. He gradually increased the height of the pillar until it reached 80 feet in height and built a double wall around it to keep the crowds away. Women were not permitted beyond the wall, not even his own mother who had spent many years trying to track down her son’s location. When she died Simeon asked that her coffin be brought to him. He bid her farewell and, it is said, a smile appeared on her face.

Simeon lived an ascetic life for 80 years including 47 years on top of the pillar. Many pagans converted and were baptized, impressed by the uprightness and strength which the Lord gave him. His death was discovered by his close disciple, Anthony. Concerned that Simeon had not appeared in three days, he climbed the pillar and discovered Simeon’s dead body. Patriarch Martyrius of Antioch performed the funeral before a large crowd of clergy and laity. He was buried near his pillar and Anthony established a monastery at the spot.

Simeon is often depicted in art as sitting on top of a column, usually surrounded by a crowd of onlookers. Occasionally he is depicted as an emaciated hermit holding a column. Theodoret, a 5th century church historian, Simeon’s images were used as protecting amulets at the entrances of shops in Rome.

While we can admire Simeon’s dedication, I’m not convinced that this was the plan for him which God had in mind. The Greek word for church which is used in the New Testament is ekklesia, which means a community. Simeon seemed to do everything he could to avoid community even after God sent His angels as a messenger to his igumen to bring him back to the community. None of us is perfect and we all mess up in our own way so I’m not condemning him, just wondering what he could have accomplished had he remained in community.