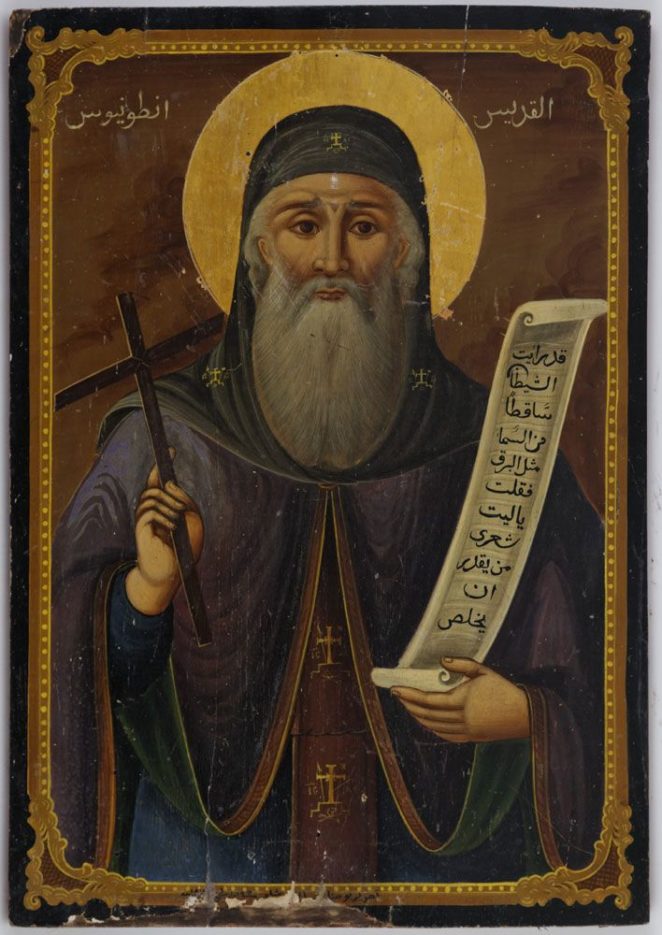 Saint Anthony is usually depicted in art as a very old monk wearing a habit as an indication that he was the founder of monasticism. He may be pictured with a bell or asperges (a pitcher for holding holy water and a device for sprinkling it), both of which were used to exorcise evil spirits and a tau-shaped cross which might be an indication of his age and authority. (The tau-cross is also worn by the Franciscans and the Knights of Saint Anthony which was founded in 1352.) He is sometimes depicted with a pig which showed his battles with Satan over sensuality and gluttony). Sometimes he is depicted with a book indicating his devotion to the Bible or with flames because his name was invoked during the Middle Ages by those suffering from Saint Antony’s Fire. He is also shown eating with Saint Paul the Hermit, the bread having been brought to them by ravens.

St. Anthony of Egypt is considered to be one of the Desert Fathers, the first and probably the best known of them. We know quite a lot about him thanks to the biography written by his disciple Saint Athanasius the Apostolic. Anthony lived a life of consecrated solitude. This does not mean that he never saw anyone else, just that most of his time was spent in solitude.

His influence spread throughout the Christian world even to today. It wasn’t just his life of solitude but his holiness which impressed people.

According to the Coptic Orthodox Book of Saints Anthony was born about 251 AD to well-to-do parents in Coma (Kemn-el-Arouse) in central Egypt. At the age of 18 his parents died and he was left to care for his younger sister, Dious. Six months later he entered a church and heard a sermon on the rich young man to whom Jesus said to sell all his wealth and give the money to the poor (Matt 19:21). Unlike the rich young man, Anthony followed Jesus’ instructions and sold 300 acres of fertile farmland, gave a little of the money to his sister and gave away most of the money to the poor. He placed his sister in the charge of a small group of virgins (this is what nuns were referred to at the time) and went off to live a life of solitude.

After a period of time spent under the leadership of a master in which he learned the principles of spirituality, prayer and fasting, Anthony moved into an empty tomb in the desert. A friend brought him bread and water from time to time but much of Anthony’s time was spent  resisting the temptations of the flesh and the attacks of demons.

At the age of 35 Anthony moved to the east bank of the Nile River at Pispir (Vista). Here he lived in complete solitude. However, over the course of the next 20 years, he began to attract many followers who wished to emulate his lifestyle. They settled in the neighboring area. Five years later Anthony moved again, back to solitude, this time in the “Inner Mountain” (Mount Qolozum).

Life in solitude was not easy. He began to get bored and discouraged wondering, with all of the temptations he was experiencing, how he could possibly be saved. He started taking walks an an angel, in the form of a young man making mats out of palm leaves, showed Anthony that he could relieve the boredom by a combination of prayer and work. (Work here referred to manual labor, not doing good works.)

Living in solitude did not mean that Anthony never interacted with others. When a persecution arose in Alexandria in 316, Anthony visited the imprisoned and ministering wherever he could. When the persecution ended, he returned to his solitude. He revisited Alexandria in 352 to support the pope in his battle against the Arian heresy.

Anthony never founded a monastery. His rule for his followers was simple: work and prayer. Jesus was a carpenter and Paul made tents so they should work as well. It would help keep them from temptation. Anthony also developed a uniform for his followers. It consisted of a below-the-knee-knee-length white linen robe with a wide, thick leather belt. A similar design is used in many monastic orders today.

The people did not wait for Anthony to come to them. There was a steady stream of pilgrims visiting him as well. Some were monks seeking advice while others were laity seeking healing.

Anthony died of natural causes in 356 AD at Mount Colzim, at the age of 105. He requested that he be buried somewhere where his remains would not be found but, in 561, his remains were uncovered and brought to Alexandria (Egypt). Later Constantinople claimed them. This was done because they feared their destruction by the Saracens.

In the 11th century the Byzantine emperor gave the relics to the French Count Jocelin who placed them i La-Motte-Saint-Didier (near Vienne), which was then renamed Saint-Antoine-en-Dauphiné. Here many healings of a disease known as ergotism, which became known as Saint Anthony’s Fire took place. Through his intercession two noblemen were healed and, in thanks, they founded the Hospital Brothers of St. Anthony which specialized in treating skin diseases. Finally they were brought to the Benedictine monastery of Abbey of Mont-Majpur near Arles.

A monastery named after Anthony is located in the desert, next to the cave in which he dwelt. It is home to many monks and serves as a place of pilgrimage for many.