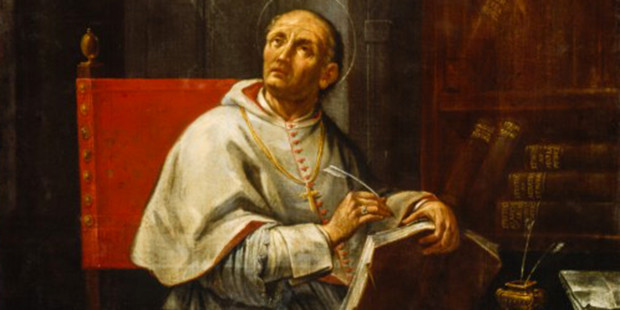 Canonized: Although he is considered to be a saint, he was never formally canonized.

Status: Saint, Doctor of the Church

Peter Damian’s early days were unusual to say the very least. His mother already had many children so she threw her newborn out to die. The concubine of a local priest changed her mind and she took her back in. There was no father to be found. His mother died soon after this and Peter was raised by his older siblings.One of his brothers, who was married, took him in but mistreated him. Another brother, an Arch-priest named Damian, intervened and educated Peter. Peter was grateful and, in his brother’s honor, added the name Damian to his own.

Besides excelling as a student, Peter also became a professor. Despite this he was opposed to the study of the humanities.

In 1035 Peter entered a rather austere monastery and managed to outdo the other monks in his severe lifestyle. This caused him medical problems. Twice his own abbot sent him to other monasteries to bring them into line. In 1043, acting under obedience, he became an abbot.About 1050, during the pontificate of Leo IX, Peter wrote a treatise condemning the vices of the clergy. Among these vices were the sexual abuse of minors by priests and the resulting cover-up by the hierarchy. In 1053 he wrote another treatise defending the legitimacy of the priesthood of men who had purchased the office.

Due to his reputation for personal holiness, a succession of popes used him to bring reform to the church. Finally, in 1057, Pope Stephen IX ordered him to take the position of Cardinal-Bishop of Ostia. He went to war against the vices he saw prevalent there including, oddly enough, the game of chess. He once assigned a bishop the penance of reading the complete book of Psalms three times when he caught him playing the game.

In 1046 Emperor Henry III of the Holy Roman Emperor deposed two popes and put forth his own candidate. Peter congratulated Henry but later supported Archdeacon Hildebrand who, as Gregory VII, took back control from the emperor and instituted papal reforms.

Peter retired and spent his later days at Fonte Avellana although he was periodically sent on diplomatic missions by various popes. He subsisted on a diet of coarse bread and stale water. He wore an iron girdle and frequently engaged in severe flagellation.

Peter died in 1072 at the age of 83 in Ravenna. He was surrounded by monks praying the Divine Office.

Although he is considered to be a saint, Peter was never officially canonized. Veneration began almost immediately after his death but was not officially recognized until it was approved and extended to the entire Catholic Church by Pope Leo XII in 1823 who also declared him to be a Doctor of the Church.

Peter is usually portrayed in works of art as a cardinal archbishop holding a birch and a book. Sometimes he is shown as a bishop with a cardinal’s hat either above his head or at his side. He is also portrayed as an old deceased hermit, on a stone slab in a cave with a crucifix on his chest. There are often books, a miter, a cardinal’s hat and angels near him. He has also been portrayed as praying before a cross with a miter and cardinal’s hat on the ground