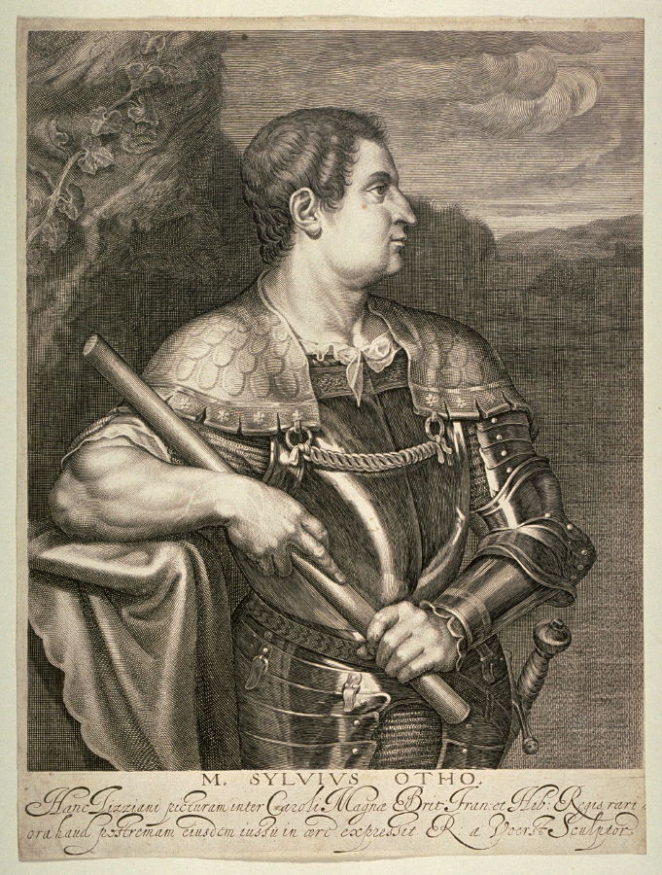 Marcus Salvius Otho was the second of four Roman emperors who reigned during the year 69 AD, his term of office lasting from 15th January to 16thApril.

He was born in 32 AD, a member of an ancient and noble family, several members of which had held high office. He was not particularly striking in appearance, and was indeed described by some as effeminate. He was a member of Nero’s inner circle and took part in the debaucheries that Nero instigated.

He was married to Poppaea Sabina, a beautiful but licentious woman who attracted the eye of Nero. It is also clear that Poppaea was wholly in favour of a liaison with the emperor and schemed with Nero to get Otho out of the way. Indeed, the writer Tacitus suggested that Poppaea only married Otho in order to get closer to the emperor. Nero sent Otho to Lusitania (modern day Portugal) as governor but Poppaea stayed behind in Rome, becoming firstly Nero’s mistress and then his wife.

Poppaea was to come to regret this move, as Nero proved to be bad-tempered and violent. The general belief is that she died after Nero kicked her violently when she was heavily pregnant; however, as there were no eye-witnesses to this event it is quite possible that this is just a story that grew out of hatred for Nero, and she may have died as a result of a natural miscarriage, or in childbirth.

Otho stayed in Lusitania for ten years, governing the province with credit. However, his anger at Nero’s behaviour in stealing his wife must have rankled with him down the years, because he was more than ready to join Galba in his rebellion against Nero in 68 AD.

At that date Galba was 71, whereas Otho was much younger at 36. By supporting Galba, Otho hoped to be named as his successor should the childless Galba become emperor. However, Galba turned his back on Otho and named Piso Licinianus to succeed him. Otho then plotted to overthrow Galba by conspiring with a number of soldiers in Rome who were in any case disgruntled at how Galba was behaving as emperor. Galba was assassinated and Otho was declared emperor in his place, on 15thJanuary 69 AD.

However, on 3rd January a number of soldiers based at Cologne in Germany had carried out their own rebellion against Galba and named Aulus Vitellius as emperor. Caecina and Valens, generals loyal to Vitellius, then led their armies towards Italy to ensure Vitellius’s position, and Otho moved north from Rome to meet them.

At first, Otho held the upper hand, defeating Caecina on several occasions, but when both the opposing armies fought together against Otho at Bedriacum he was defeated. He could probably have continued the fight, having plenty of troops at his command, but he declared that he had no wish to engage the empire in further bloodshed and took his own life on 16th April 69 AD, thus allowing Vitellius to become the next emperor.

Having had so short a reign as emperor (only three months, much of the time spent in the campaign field) there is no way of telling how Otho would have worked out as the most powerful man in Rome. Would the careful and moderate governor have prevailed, or the licentious profligate who had known no shame when a friend of Nero? Given that absolute power tends to corrupt absolutely, there is no guarantee that Otho would not have proved to be the latter.