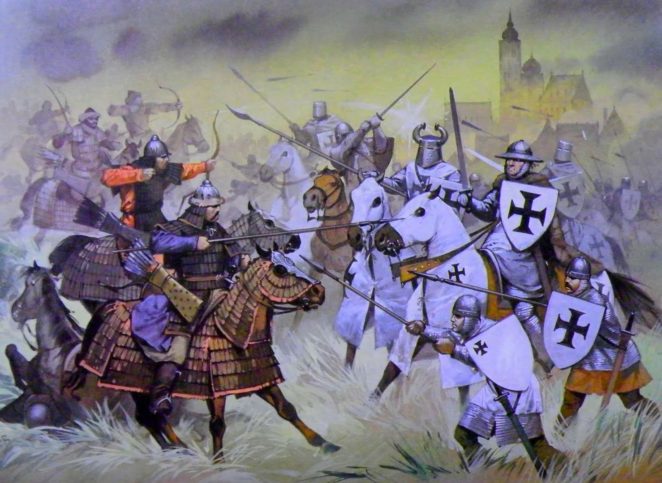 Keeping up with the history of knighthood orders, they have always attracted the curiosity of historians and ignited the general public’s imagination alike whether it be due to the bravery exhibited by their warriors in front of their enemies or by their devotion to a transcendent idealism. What is less known is that amongst the numerous brotherhoods where the religious and military form an integral part of the lives of their members, the Order of the Teutonic Knights was one (in fact the third order) of the largest due to its accumulated riches and the influence it exerted on the Germanic, Baltic and Slavic worlds.

That is why it is important to remind ourselves that the Teutonic Knights were above all soldier monks originating first from Germany (just like the Knights of the Swords). In fact, the Order of the Teutonic Knights was developed during the 3rd Crusade that raged from 1189 to 1192. At its beginning, the Order consisted of German pilgrims that, face to face with the atrocities of war, decided to help and treat the soldiers from diverse regions of Germany and Europe.

They organised themselves within a country hospital under the name of “House of the German Hospital of St-Mary of Jerusalem” or “Maison de l’Hôpital des Allemands de Sainte-Marie de Jérusalem” (in keeping up with my tradition of the French translation). From then on, they set out a small hospice, a small church and a cemetery outside of the city of Acre in today’s Israel, under the protection of the Virgin Mary. As the number of wounded increases, the hospital receives the support of many princes belonging to the Holy Germanic Roman Empire.

That empire was a moving and fragmented entity covering a large part of Germany, Austria right up to the North of the actual Italy. At its head was an emperor elected by an assembly of princes. His power was often only relative and largely disputed between different noble families. However, we can affirm that it was the first Germanic Empire in history and it certainly was a an important reservoir of recruitment for Teutonic Knights.

Eventually, the Order becomes militarised by 1198 to become an Order of monks-soldiers in order to battle Muslims. On the 19th of February 1199, Pope Innocent 111 recognises this organisation as an independent military Order commanded at the time by the Grand Master (Hochmeister) Heinrich Walpot. The brothers of that Order (the Bruders), obeyed to rules inspired by the Templar Knights when it came to its military aspect and by those of the Hospitallers (Hospitaliers) in their benevolent and beneficent mission.

Unlike the Knights Templars and the Order of the Hospitallers (Hospitalier), the members of the Teutonic Order were mostly Germans, although some foreigners were also recruited.The Teutonic Knights adopted a white cape adorned with a black cross because white was the colour of purity and black the colour of penance and humility. The white colour of the cape had also some utilitarian purpose: it helped alleviate the heat radiated from the chain mail outfit under the fierce sun of the Holy Land. This type of clothing became the symbol of a German warrior elite ready to strike the infidels with one hand and help the needy with the other hand.

When the last lands in the Middle Est that belonged to the Crusaders eventually fell into the hands of Islam, the Teutonic Knights retreat to Europe, more specifically to Venice, in order to determine a new destiny to give to their Order. After some setbacks, the Order obtains the approval of the Holy Germanic Roman Empire and the Pope to fight the pagans and peasants on the Baltic coast. As a result a relatively black legend strikes the Teutonic Order, particularly because of the cruelty and brutality of its knights against the pagan people of the Baltic coast, especially the Lithuanians. But on the other hand the Teutonic knights also carried out charitable actions towards the sick and the poor. They are also responsible for the construction and development of many cities such as Marienburg, Konigsburg, Thorn and others.

From the X111th  to XVth century, the Teutonic Knights were the builders of an empire extending itself along the banks of the Baltic. They had their own State, headed by a Grand Master (Hochmeister), who was served by an administration that effectively collected and managed the precious accumulated goods and money, which in turn enabled the Order to equip a trained and disciplined army and also ensure the proper maintenance of its many castles: all this to cope against the Lithanians and Slavs.

Empires are nonetheless not eternal: that explains why, in 1410, the Order declines following the battle of Tannenberg against a Polish-Lithuanian coalition. But the Order did not entirely disappear as Teutonic Knights still exist to this day but they have definitely abandoned the sword to return to their primary mission of helping the needy and the sick.

As a side note, I just want to point out that being a knight in the medieval era was a rigorous and treacherous career choice. He had to first answer no to these questions: do you belong to another order?, are you married?, do you suffer from any physical disabilities?, do you have any debts? and are you a serf?. He also had to answer yes to the following questions: are you ready to wage battle in Palestine?, or anywhere else that we send you?, are you willing to protect people who are suffering?, are you willing to obey any and all order?, will you obey our code of conduct?. The applicant could then become a brother Knight after taking an oath in front of the Grand Master of the Order. From then, on a new life was offered to the Teutonic brother, a life of prayers and combats in order to conquer new lands for God.

That new life was an ascetic and religious one framed by strict rules of conduct. That was in order to maintain a rigorous discipline within the military Order to be able to face any danger. The new Knight had to relinquish all his belongings as he was not allowed to have anything for himself. On top of that, they were not allowed to have any money and/or to barter. Each brother had 2 shirts, two pants, two pairs of boots, a cloth shirt. a sleeping bag (not like the ones we have today), a blanket, a breviary and a knife. Bedtime was between 17h to 20h (5 to 8 pm) and wake up time between 1h to 2h am.

As for meals, the brothers only ate twice a day, preceded each time by the recitation of the Pater and Ave Maria, and then the knights have to eat in total silence. Fasting is also totally respected especially during Lent. On the other hand, deviations from this rule can be accepted especially when the brothers fight so that they do not fall from exhaustion.

In between prayers and reclusion, the brothers practice war games either when on a hunting party notably for wolves and bears to be able to demonstrate and practice their warring skills or against each other. In the Middle Ages, weapons of war included the use of a one-arm sword, a falchion (a type of sickle type sword), the wearing of a small shield, wrestling with or without armour as well as practice and using the crossbow. The Knights had to master several weapons.