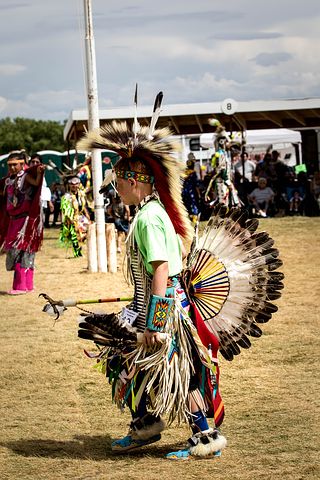 The horse track had advertised that this weekend was to honor Native Americas and Military. It was a known fact. There was an Indian Relay schedule to run. It seems clear to any one who was coming that there would be Native Americans, Military and First Responder all over the track.

The first thing has always happens at the track is the National Anthem. It always amazes me that they have to remind people to stand. I happened to be sitting on a row with a whole bunch of retired military on one side and a large number of Native Americans on the other side. In front of me was on the most uneducated, intolerant man I have ever come into contact with.

The announcer asked that we stand for the National Anthem and remain standing for the Native American drum circle.

I signed the National Anthem as that is what I have committed to do as an interpreter. Since all the retired military were on my right, during the National Anthem, and none of them were dressed in uniform so they stand at parade rest. It’s what they have been requested to do at least since Vietnam. When the drum circle began the veterans remained at parade rest to show the same respect,  except 3 Native Americans still stood and honored the drum circle in the manner to Native Warriors participate. It was amazing, until the man turned around and started yelling “What is all this (words I can’t say) and what makes these people think they are Americans.”

I was proud that no one broke ranks. Everyone  ignored the yelling man until the ceremony ended and then three security guards came and took the man and three native retired military, and one officer away. As they were leaving, one of them being my husband, the person in charge said, “You need to come with us as well.”

All of the sudden we were in winners circle in track side. I was very uncomfortable and just wanted to leave. I was ashamed, angry and a ball of emotions. The security guard got a microphone and asked the crowd to listen and learn. He started with me “Can you tell me why you signed the National Anthem?

“Because when you get a license to be a certified interpreter you agree to sign it every time, just in case there is someone in the area that requires it.”

“Because we are trained that if we are out of uniformed and have ever served, we stand respectfully at parade rest.”

He then went to my husband and I have to admit I held my breath. He was asked, “Why did you something different during the drum circle?”

“I am native and that song was the invitation to  all tribes to come peacefully under one flag and for every person to honor their roots and heritage and this was the way I was brought up to respond and show respect.”

The man in charge then turned to the person who had sworn and caused all the commotion and said. “Well know that you have been taught and know the reasons of this celebration and why everyone responded the way they did you have two choices.  “You can apologize and return to your seat or I will have these two gentleman escort you off the property and the charge you paid to come here today will be refunded.”

What choice do you think the angry man made?

Today the same people will be honored in the same way, do you believe I will be going?