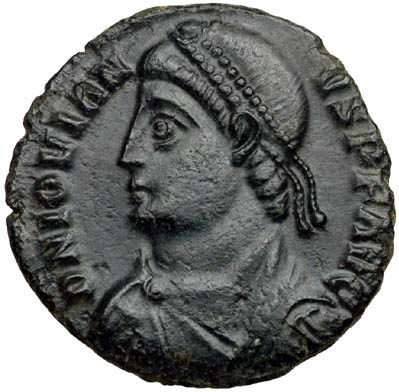 If Jovian is not a familiar name when you think about Roman emperors, that is hardly a surprise. His reign lasted for less than eight months, beginning with the death of his predecessor in battle and ending with his own in circumstances that suggest either murder or an unfortunate accident.

Flavius Iovianus was born in 331 (or thereabouts) in Singidunum (present-day Belgrade). His father was the commander of Constantius II’s personal guard, and an army career clearly beckoned for Jovian. He had reached the rank of senior staff officer when he took part in the campaign by Emperor Julian in 363 to force the Persian emperor Shapur II to withdraw from Mesopotamia. This campaign had been badly planned and resulted in the Romans being forced to retreat.

During the retreat, Julian was fatally wounded and the army commanders found themselves in need of an immediate replacement as emperor. Julian had no children, which meant that the dynasty that began with Constantius I could run no further. In the search for a suitable candidate, Jovian came into the reckoning.

His first task was to negotiate a safe withdrawal for the Roman army. This was done by making territorial concessions to Shapur in return for safe conduct. Previous emperors had fought hard and long to retain parts of the empire that Jovian now signed away in an instant, but it was generally agreed that he had no choice.

Jovian had little opportunity to make a mark on the domestic front, but one important reform of his was to revoke Julian’s law that forbade Christians from teaching grammar and rhetoric. Jovian was quite prepared to tolerate all forms of religion and took no steps to oppose Julian’s pagan supporters. From now on, the empire would be ruled only by Christian emperors.

There is every possibility that Jovian would have proved to be an excellent emperor, given his recognition that progress could only come from negotiation and tolerance, but this has to remain one of history’s “what ifs” because Jovian was found dead in his bed one morning in February 364.

No investigation was held into the circumstances of Jovian’s death, which might have hinted at a cover-up of murder, but there is every chance that Jovian died as result of an accident – carbon monoxide poisoning from an ill-ventilated coal fire was a distinct possibility.

At all events, the general staff members were faced with the same dilemma they had faced the previous June and, after a week or so’s deliberation, they came up with a similar solution, namely the declaration as emperor of another relatively junior officer who would reign for the next ten years (jointly with his brother Valens) as Valentinian I.