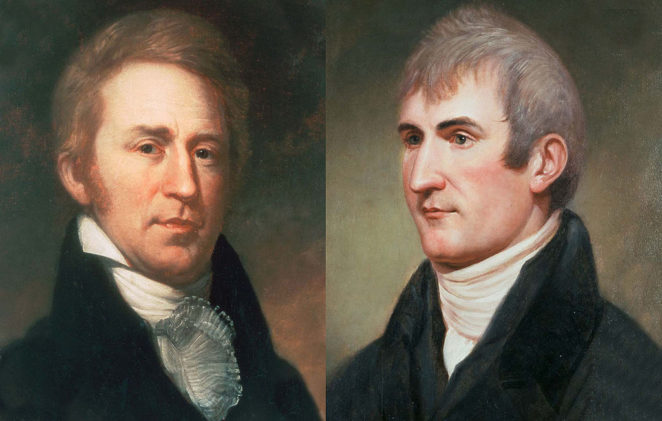 Lewis and Clark were two explorers who were sent by President Thomas Jefferson to explore the interior and west of the North American continent. Inadvertently, they also made important contributions to the development of American English.

The western adventure of Lewis and Clark

It cannot be denied that American English exhibits many features that are peculiar to it and which set it apart from other varieties of English spoken around the  world, noticeably that of the “home” country of English, namely the United Kingdom.

One contribution that is not always appreciated is that of Lewis and Clark, two explorers who were sent west by President Thomas Jefferson to, if possible, discover a river that flowed to the west coast.

This expedition was made possible after the American government doubled its territory in 1804 through the Louisiana Purchase, surely one of the best bargains of all time. However, little was then known about what this new land contained, whether it offered enticing prospects for development or dangers for the unwary, whether the natives were friendly or hostile, and much else besides.

Meriwether Lewis (1774-1809) and William Clark (1770-1838) were army captains (technically, Clark was only a 2nd lieutenant but this detail was overlooked) who led an expedition that totalled 33 individuals, setting off on 14th May 1804.

The journals of Lewis and Clark

For  the story of American English, the important thing to note is that Lewis and Clark kept meticulous daily journals throughout their travels, at President Jefferson’s insistence. On their return, these journals were published, becoming hugely popular and widely read, and from them came a whole host of words that had never been seen before.

Lewis and Clark were not highly educated men, having spent much of their young lives exploring the outback and fighting small campaigns against various native tribes. Clark, who seems to have done much of the writing of the expedition journal, was particularly conscious of his lack of skill as far as grammar and spelling were concerned. It was, in any case, a time when spelling had not yet been standardised by dictionaries such as Noah Webster’s which first appeared in 1806.

The journals therefore describe places, geographical features, animals, and much else besides, in the best language that Lewis and Clark could manage. This was partly due to their ignorance as a result of poor education but also from the need to find names for the unfamiliar. For example, the word “creek”, which means a tidal inlet in British English, was now used to mean any sort of stream. The word “rapid” is an adjective, but it could do excellent service to describe water moving rapidly over a rocky bed, as “rapids”.

When Lewis and Clark had no word for something, they were apt to stick two words together to create a new one. A snake which shook its tail to make a rattling sound could best be described as a “rattlesnake”. A wood of trees bearing tufts that looked like cotton gave rise to “cottonwood”. There are hundreds of such examples in the journals.

Some of the mistakes of modern American English can be laid at the doors of Lewis and Clark, due to their lack of knowledge. The animal known to Americans as a “buffalo” has no connection with the African or Asian animals of that name, because what Lewis and Clark thought were buffaloes were in fact bisons, which are members of a completely different species. The same is true of “elk”, which is not the same species in Europe that it is in America.

On their travels, Lewis and Clark came across several native American tribes and picked up many names from them. Some 500 words in the journals are of native origin, including “maize”, “opossum”, and “toboggan”.

Noah Webster declared that his dictionary contained only about fifty words that could be said to be peculiarly American. That is far from the case with the journals of Lewis and Clark, which are full of “Americanisms”, many of which have since flowed out of America and into the English spoken in other parts of the world. Without in any way intending to create a revolution in the way English was written and spoken in North America, Lewis and Clark did precisely that.