John Rogers’s claim to fame is that he was the first victim of Queen Mary I’s campaign against Protestants.

The break from Rome that was launched by King Henry VIII when he divorced Catherine of Aragon in 1533 did not result in a huge change in the way religion was practiced in England – at least, not until Henry died and he was succeeded by his son, King Edward VI. Protestantism then got going in no uncertain way, and John Rogers was one of many preachers who spoke out openly against “pestilent popery, idolatry and superstition”.

John Rogers had been educated at Cambridge University and was a friend of William Tyndale, who had translated the Bible into English but been executed in Belgium in 1536. Rogers was himself an editor of what became known as the “Matthew Bible”.

Edward’s reign was short – he died at the age of 15 in 1553 – and he was succeeded by his sister Mary, who was the Catholic daughter of Catherine of Aragon. Mary promptly did everything she could to reverse the English Reformation and turn the country back to Roman Catholicism.

For many people, this was a welcome move. Protestantism had turned out to be far less colourful and dramatic than what had preceded it. For example, it has been estimated that more than 90% of the artworks in England – most of which had decorated its churches – were destroyed during the early years of the Reformation. Ordinary people were far less interested in theology than in having their drab lives enlivened by the “bells and smells” of Sunday worship. 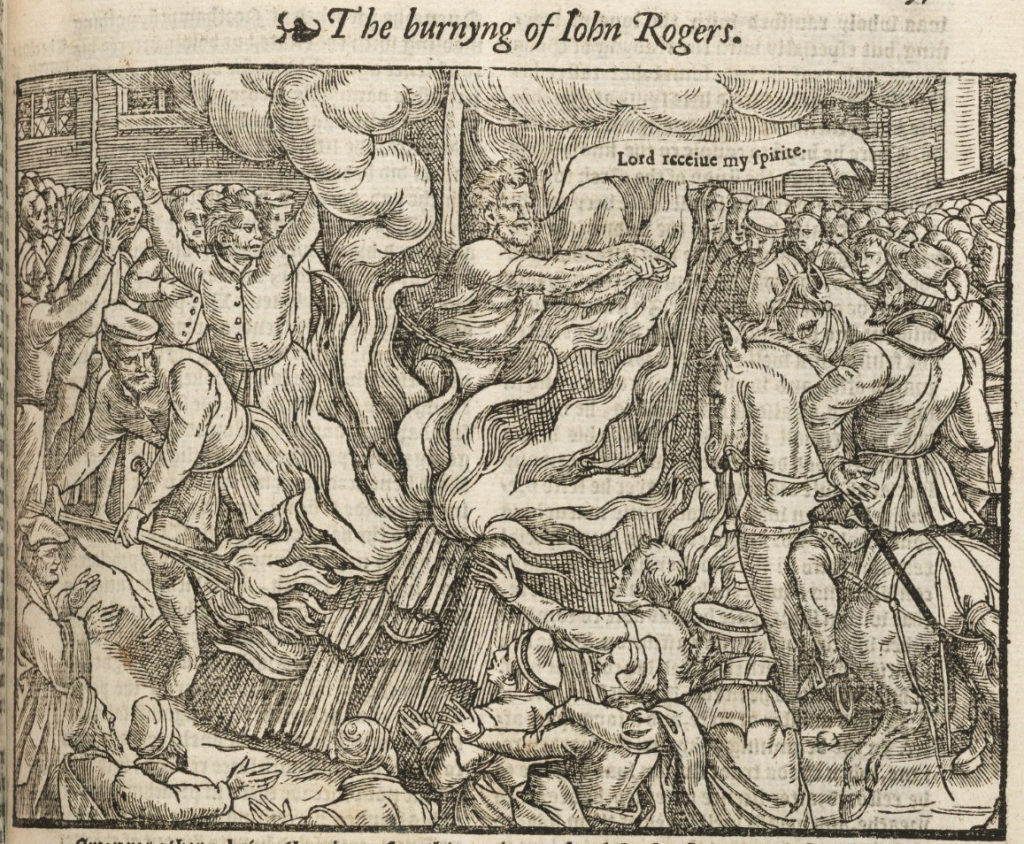 This was also true of many clergymen, who were perfectly content to convert back to Catholicism once Mary arrived on the throne.

It was not true, however, of a die-hard group of Protestants of whom John Rogers was one. He continued to preach against “popery” and was arrested after he destroyed an image of a saint in a parish church.

His arrest took place in January 1554 and he was given several opportunities to “revoke his abominable doctrine”, which he steadfastly refused to do. On being condemned to death he stated: “that which I have preached I will seal with my blood”.

His execution took place at Smithfield on 4th February 1555. He was burned to death in front of a large crowd, which included his wife and 11 children.

His was only the first of many such executions that would took place during the reign of “Bloody Mary”. There would be nearly 300 more during the next three years, to be followed by persecutions of Catholics when Mary’s Protestant sister Elizabeth succeeded her in 1558.

England’s religious turmoil would make many victims out of people who refused to change their beliefs.