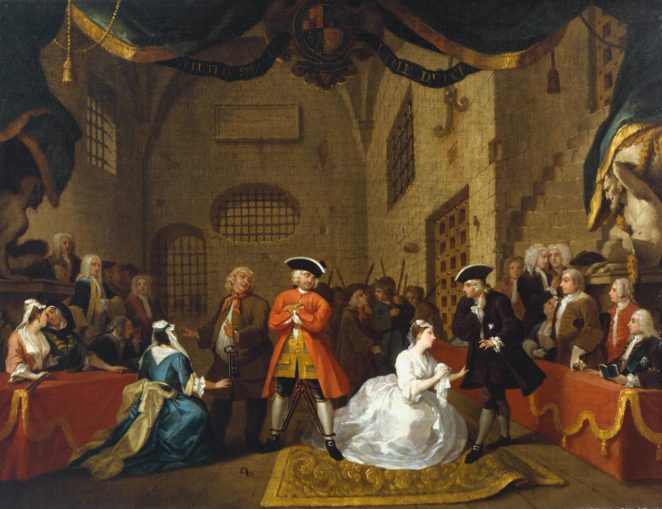 Jenny Diver lived from about 1650 until her death on the gallows in 1710. Her life of crime, mostly lived in London, was one that might easily excite admiration if you were not one of her victims!

She usually worked as the leader of a team, although she was central to the action and never simply sent others to do her dirty work on her behalf.

One stratagem was to wear a dress to which was attached a pair of realistic-looking false arms and gloved hands. The dress would also be stuffed with a cushion to make her look pregnant. Jenny would attend church and sit between two rich ladies. While the ladies knelt to pray and most eyes were reverentially closed, Jenny’s real hands would get to work, relieving the ladies of their valuables and passing them to her companions in adjoining pews. Should one of the ladies discover that they had been robbed, nobody would suspect the pregnant lady whose hands had been in her lap the entire time!

The fainting fit was another good ruse. Jenny would choose a crowd of people, such as might be watching a royal procession go by, then pretend to faint and fall to the ground. While everyone nearby showed concern and tried to help her, their pockets would be swiftly plundered by Jenny’s team members.

One of her more outrageous exploits came when she knocked on the door of a house in Wapping that belonged to a wealthy lady named Mrs Mapplebeck. Jenny Diver’s “footman” explained that she was not feeling well but had not got her smelling salts with her. Mrs Mapplebeck asked them in while she went upstairs to find her own bottle of smelling salts – Jenny waited in the lounge while the footman was sent to wait in the kitchen. They took good advantage of this time to help themselves to a good collection of Mrs Mapplebeck’s belongings from both rooms. Just for good measure, when they left the house they drove off in Mrs Mapplebeck’s coach!

The following day, Jenny Diver went to the theatre, still in Mrs Mapplebeck’s coach, and flirted with a young gentleman from Yorkshire who was clearly well-to-do. She suggested that he visit her at home the next day, when her husband would be away. This was, of course, not her own home but a lodging house rented for the purpose. After the young man had undressed and was looking forward to what would follow, Jenny’s maid knocked on the door to say that the “husband” had returned early and was on his way upstairs. The man from Yorkshire hid under the bed and only dared to emerge half an hour later, to find the place devoid of Jenny, her maid, his clothes, and all the cash and valuables from his pockets!

An expected end but immortality of a kind

Jenny Diver later moved to Bristol where her luck ran out and she was arrested and deported to the American colonies. However, she conned her way back and resumed her old ways, only to be caught one last time, after which she was hanged at Tyburn. However, her reputation was such that she was accorded the dignity of being taken to the gallows in a coach rather than a wagon. She also became a character in John Gay’s 1728 celebration of low life, “The Beggar’s Opera”.