Zimbabwe gained her independence from British rule after a long struggle that began with the “Unilateral Declaration of Independence” by the white Prime Minister Ian Smith in 1965 and ended in 1980 after the Bush War that brought Robert Mugabe to power. However, this was not the first war of independence but the second.

The land that is now Zimbabwe came under British rule thanks to the imperialist ambitions of Cecil John Rhodes, whose British South Africa Company annexed vast areas of territory north of the Limpopo River. By 1895 Rhodes had acquired more than a million square kilometres between the Limpopo and Lake Tanganyika, land that was given the name Rhodesia in May 1895. Today, the northern part comprises Zambia and the southern part Zimbabwe.

However, the British advance into tribal lands was not without opposition. The indigenous people, the Ndebele and the Shona, took up arms to regain their lands and their cultural and political dignity. The resistance offered in 1896-7 became known as the First Chimurenga by the Africans but the Second Matabele War by the British. The name Chimurenga was coined by Sororenzou Murenga, who had led his people during First Matabele War in 1893. It can be roughly translated as “revolutionary struggle”.

The inspiration for revolt came from spiritual mediums such as Mlimo, who persuaded the Ndebele that the white men were responsible for all their woes, including introducing the cattle disease rinderpest (he may have been correct in this) and bringing drought and plagues of locusts (for which the whites were unlikely to have been guilty). However, the Ndebele had good cause for revolt, in that the settlers had been responsible for thefts of land and cattle and acts of rape and murder against the people.

Like most mediums of his kind, Mlimo was able to convince the warriors that they were immune to the bullets of the white men, a claim that has never been proved in reality. Also credited with inspiring the people was a female warrior called Mbuya (Grandmother) Nehanda Nyakasikana, who was largely responsible for getting the Ndebele and Shona to fight against a common foe. The title of Mbuya was given much later in recognition of her role as the grandmother of Zimbabwean independence.

The siege of Bulawayo

Mlimo had hoped to capture the town of Bulawayo, because most of the British garrison was absent dealing with the “Jameson Raid” emergency in the Transvaal, but attacks on settlers in the countryside started before he could make his move on the town, which he did in March 1896 by which time many white people had escaped into the town for safety. There they built a “laager”, a makeshift fortification along the lines of the Wild West “corral”, into which they could gather at night for protection.

To say that Mlimo laid siege to Bulawayo would be something of an exaggeration, because the Ndebele were fearful of the British maxim guns that they had encountered during the 1893 war, and they had no great desire to get within range, despite any spiritual protection that their mediums might offer. They even overlooked the need to cut the telegraph wires that connected Bulawayo with the outside world, so the settlers were able to communicate and call for assistance.

The settlers were able to send patrols out into the countryside to rescue other settlers and to fight back against the Ndebele. This became known as the Bulawayo Field Force, led by the remarkable American adventurer Frederick Russell Burnham, who was to leave his mark on the world for a different reason, mentioned below.

It was not until late May that two relief columns reached Bulawayo, one from the north and the other from the south. These were able to break the siege, and the settlers were saved. The second-in-command of the restored garrison was Lt-Col Robert Baden-Powell, whose meeting with Frederick Russell Burnham was to have consequences that spread far beyond Bulawayo.

The British were now able to take the offensive against the Ndebele, but they did so in more subtle ways than simply mounting full-scale assaults, which were impossible when their enemy had the advantage of being able to melt away into a countryside that was alien to the white invaders. After the relief of Bulawayo, Mlimo and his warriors had retreated to the Matobo Hills, an area of sacred significance about 20 miles to the south that is dotted with many caves, in one of which Mlimo took refuge. 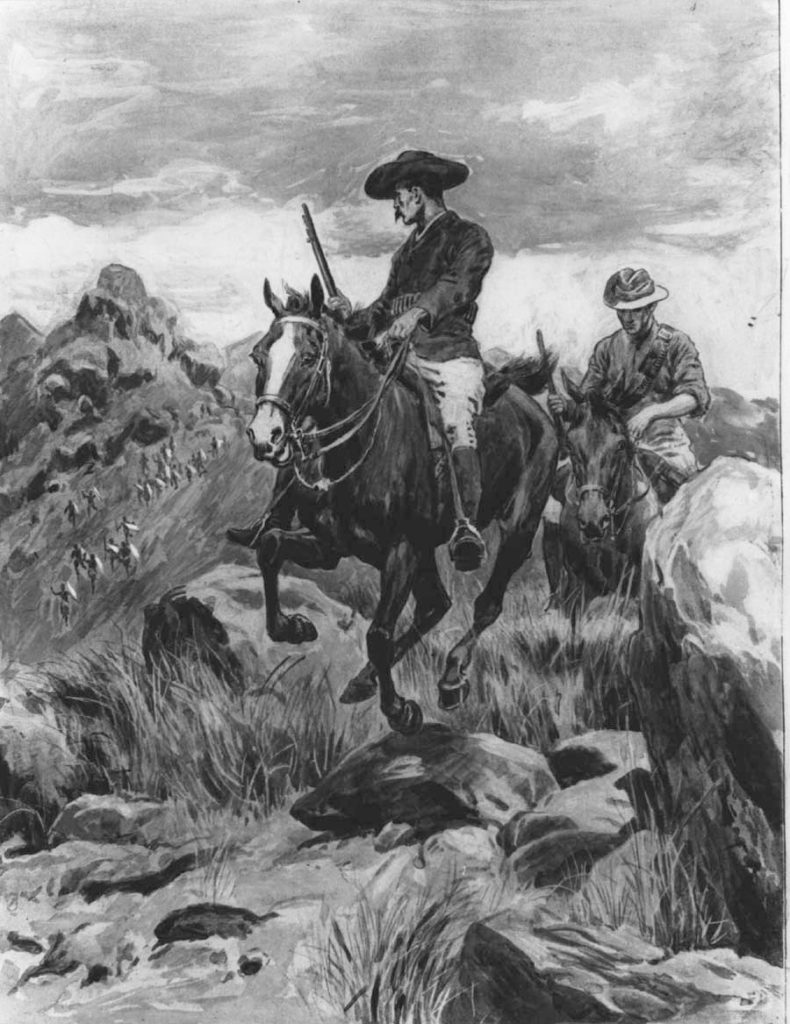 Burnham and an associate were able to infiltrate the area and enter Mlimo’s cave without being seen, by using the skills of scouting such as tracking and camouflage. There they waited for Mlimo to enter and shot him dead when he appeared. They were able to escape back to Bulawayo despite being chased by a hundred angry warriors. With Mlimo dead, the Ndebele resistance was broken, and Cecil Rhodes was able to accept their surrender in person in October 1896, offering them a land settlement in return for peace.

The war in Mashonaland

However, the war in Mashonaland, to the north and east of Matabeleland, continued. The Shona were particularly cunning and calculating in the planning of their rebellion. The official British report of the war stated: “So cleverly was their secret kept, and so well laid the plans of the witchdoctors, that when the time came the rising was almost simultaneous, and in five days over five hundred white men, women and children were massacred in the outlying districts of Mashonaland.”

In June 1896, the Shona launched an attack on the Alice goldmine at Mazowe, and a number of settler families were murdered as they tried to flee the area. The Native Commissioner, a man named Pollard, was captured and killed by being beheaded.

It took many months for the rebellion to be brought under control, and for the Shona leaders to be captured. Nehanda was eventually caught in December 1897 and was tried for the murder of Commissioner Pollard. She refused to convert to Christianity, as some other leaders did, and was hanged. Her last words were “My bones shall rise again”, and many Zimbabweans believe that it was her spirit that led to the successful Second Chimurenga that created the modern country.

Apart from the legacy of the spirit of rebellion, the First Chimurenga had another consequence that was much less to be expected. The friendship that developed between Frederick Russell Burnham and Robert Baden-Powell at Bulawayo led to Burnham passing on his scouting skills, which Baden-Powell was later to apply to great effect during the Boer War and to develop as a movement that has prospered and spread around the world, namely the Boy Scouts (now known simply as The Scouts).