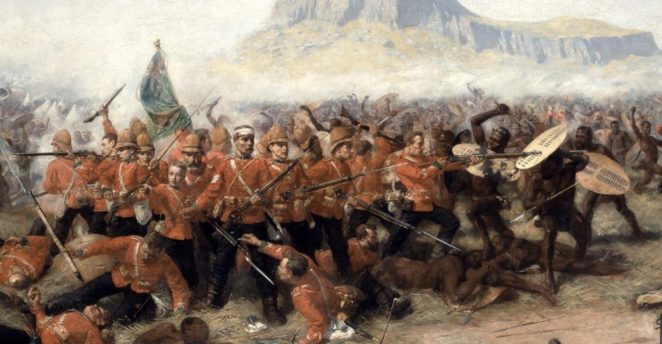 The book entitled “Brutal Valour: The Tragedy of Isandlwana (The Anglo-Zulu War # 1)” was written by James Mace with a foreword by Ian Knight. It is a must read if you enjoy part historical fiction and part real history reading. It relates the confrontations between the Zulus and the British before the war which happened and culminated on the 22th of January 1879. Isandlwana is basically a hill isolated in the Kwa Zulu-Natal province in South Africa. In Zulu terms, the word Isandlwana means “the hill that looks like an ox”. An army of more than 20,000 Zulus, commanded by Ntshingwayo Khoza and Mavumengwana Kamdlela Ntuli, sweeps away six British military companies of the 24th British infantry regiment, including a contingent of voluntary Natal soldiers and Basutho auxiliaries totaling approximately 1,700 men under the command of Colonel Durnford and Lieutenant-Colonel Pulleine.

The book presents the origin of the Ango-Zulu war of 1879 which can be found in the aggressive politics of Sir Henry Bartle-Frere, the High Commissioner of the British possessions in South Africa who, in 1877, had the mandate to reunite the British colonies, the Boers republics and the diverse African Kingdoms under one unique British Confederation since the discovery of diamonds in Kimberley in 1868. When two women (in July 1878), who flee the Zulu Kingdom are abducted from Natal (the adjoining Kingdom) and executed by their abductors in front of the British Natal soldiers, Bartle-Frere sends an ultimatum to King Cetshwayo, whereby he demands the delivery of the culprits (which BTW were already punished under Zulu laws), a payment of restitution in cattle, the dismantling and disarmament of the Zulu army, changes in the borders and the designation of a British resident in Zulu country which would have a voice in the Zulu government. This meant that the Zulu nation would lose its independence and become a subject state to the British Empire. Bartle-Frere gives 30 days to Cetshwayo to comply but he does not even answer the ultimatum.

The book also describes the Zulu army (impi) who was one of the most powerful war machine that the British would ever encounter in South Africa. In 1879, at the start of the hostilities, King Cetshwayo had 40,000 ready and able warriors, disposed in 33 regiments (ibutho in singular and amabutho for plural). The Zulu warriors were equipped with a wide bladed “assegai” along with a strong cowhide shield and some 5,000 old muskets. The war tactic of the Zulu had been perfected by Shaka. Along with the traditional courage and mobility of the Zulu “impi” he instituted a strategy named “horns of the beast” where the right and left side of the army with young warriors try to flank and surround the enemy (in this instance, the British) while the “chest” (with the most valiant and seasoned warriors) of the army faces it full front. The Zulu army is far from being invincible as the Boers had severely trounced it at the Battle of Blood River in 1838, but she was also not to be underestimated or neglected. The British, who counted on their superior fire power and strength came rapidly to realize that.

On the 11th of January, the invasion of Zululand starts under the command of Lord Chelmsford whose strategy was to simply attack Ulundi, the Zulu capital to capture Cestshwayo and wipe out his army. The invasion starts to penetrate Zulu territory with 13,000 men of which 5,000 were British with the remaining as volunteers and native recruits. There, Chelmsford decides to divide his contingent on 3 fronts with a total of 5 columns. The first column, under Colonel Pearson to the right  was sent on reconnaissance to Ulundi. The center with the principal column (commanded by Chelmsford and Glyn) was to leave Rorke’s Drift and go directly to Ulundi. On the left, the column under Colonel Wood was to cross the Blood River. A fourth column, with Colonel Durnford was to stay as reserve in Natal and protect the frontier. A fifth column was to establish itself in Luneburg to check again for any Zulu movements.

On January 12, the first skirmish begins where Mkhumbikazulu, the son of Sihayo, along with some 300 warriors is killed along with 100 warriors. This first encounter comforts the British in their conviction that victory is theirs. But, for logistics reason, the advance of the columns is delayed till the 20th of January 1879 due to the winter rains which have made travelling of the British army basically impossible. On the 20th of January, Chelmsford gives the OK to move and the British arrive at Isandlwana where it halts and puts up camp facing in the direction of Ulundi but without any barricades or fortifications to protect it and a poor design for re-ammunition. On the 22th of January, scouts spot some Zulu warriors in the hills of Nkandhla to the east of the camp. Chemlsford takes 3,000 men and goes to take them down while leaving the command of the camp to Lieutenant-Colonel Pulleine. Before leaving, he sends a message to Durnford to rally back to the camp with his column. Not too long after Chelmsford departure, about 100 Zulus appear near the camp, but just contend themselves to watch while Pulleine puts his men on alert. Meanwhile, Durnford arrives to Isandlwana but does not find explicit orders to follow. Since he is higher in grade than Pulleine and the presence of Zulus not far, he decides to send, at 08:00, Lieutenants Raw and Roberts to explore the summit of a ridge susceptible to be used by the Zulus and also goes himself on reconnaissance. Raw and Roberts, at 10 AM, notice then a band of young Zulus which they chase and arrive near a plateau where they see about 20,000 Zulus sitting very quietly in the event of their advance. Raw and his men make a quick retreat and send word to Pulleine.

The attacking Zulus then take their traditional fighting position to circle the British. From Pulleine’s vision field, he could only see the right “horn” and its “center”. He directs 6 companies of the 24th regiment to post themselves to form a line of fire. Meanwhile, Durnford’s men affronted themselves with the central Zulu formation and retreat to a “donga” (gully), where they instituted a line of defense. At that time, Pulleine’s camp, till noon, inflicts significant loss to the central “horn” of the Zulus with their Martini-Henry guns. But Durnford’s men had to retreat more due to lack of ammunition and as such expose the right flank of company G, 2nd/24th which was annihilated. The center of Pulleine’s camp is also short of ammunition and the Zulus benefit from this and kill several British soldiers who were surprised by the rapidity of the Zulus. At 2 PM, the fighting stops because the central, right and left “horns” converge on Isandlwana camp and massacre all the British redcoats, about 1700 of them, with only a mere 100 fleeing survivors. The British had to fight hand to hand combat with their bayonets but failed and were slaughtered.

This book is impressive with all the daily and hourly details of the Anglo-Zulu war which eventually continued later on. It is also excellent with the description of the Zulu and British war tactics. I give it a 5 on 5.