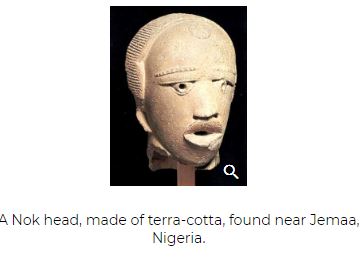 The extraordinary Nok culture was a short lived one and appeared in Nigeria around 1,000 BC but disappeared just as mysteriously at about 300 AD in the next century (at least according to the artefacts found which were radiocarboned for around that timeline). The end of that beautiful culture was probably due to an epidemic or a devastating famine. Today, it appears that it was an advanced civilization as much for its social organization as well as for its refinement in an era where the rest of meridional Africa was entering the neolithic age or the new stone age.Some archeologists and anthropologists suggest that the Nok might have been descendants of Ancient Egypt which would explain the maturity of its civilization considered as the most ancient producer of terracotta of subsahara Africa. The area covered by the Nok culture extends from North to South of today’s Nigeria on approximately 272 km (169 miles) and from East to West on 240 km (149 miles). Up to this day about 20 Nok cultural sites revealed secrets through terracota sculptures of this wonderful culture. 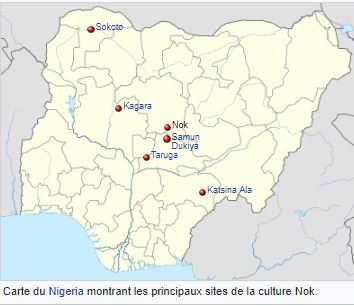 The Nok culture was first discovered in 1928 on the Jos plateau of Nigeria while the Europeans were working in a tin mine. The first sculpture was of a monkey head in terracota. Others found several heads also in terracota. All these pieces, eleven of them, were deposited in a museum in the city of Jos. Later, near 1943, other terracota figurines were discovered near the village of Nok again during mining operations. After being examined further by Bernard Fagg, a civil engineer, he and his wife started systematic excavations that revealed figurines were spread out much more than originally though of previously. By 1977, there were some 153 uncovered Nok sculptures mostly found in secondary sites as they were sometimes carried by inundations and found further up north or center in dry beds of the Nigerian savanah.

The Nok artefacts found are characterized first by their realization in terracotta done by hand without a mold or a potter’s wheel even though some of them are more than one meter (3.3 feet high). They represent humans, animals (elephants, snakes, monkeys or apes and big cats) and some fantastic looking beings (with heads half human half animal, sphinx and one birdman which is attributed to the practice of chamanism where the priest traveled to the gods’ world and served as intermediary between them and the visible world).  The male human statues are more numerous than the females but everyone of them present different attitudes. Men are usually represented sitting down with their head resting on their knees (as is the first picture underneath). They are rarely represented standing up contrary to the women who can be sitting down but with their head held high (as in the second picture below). Probably those different show of attitudes reflect a reality or a distinction in social functions.

These terracottas were done by hand by using clay. After being completed and put to dry, they were covered with a sheen and polished till they were smooth and glossy. The sculptures were all hollow with several small openings to help with the drying and cooking till hardened. The same process is still being used today in NIgeria where pots are cooked for several hours while covered with grass, twigs and leaves. 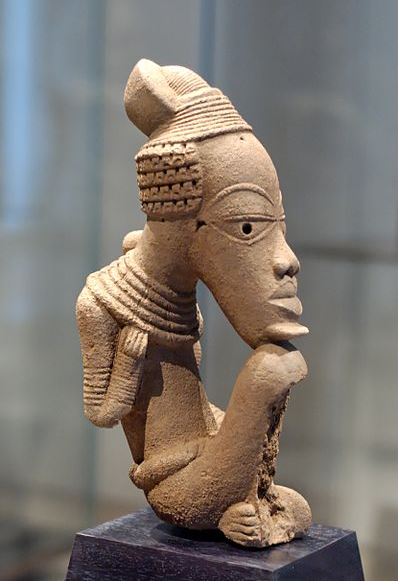 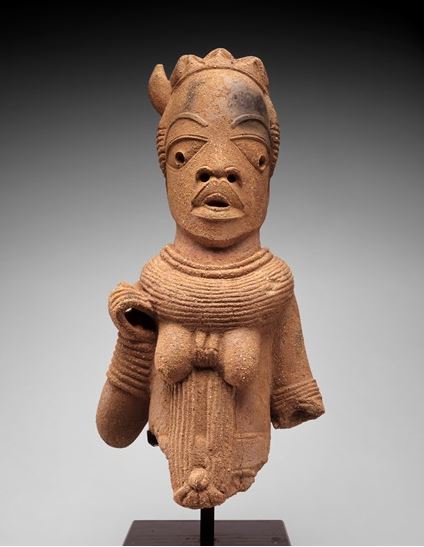 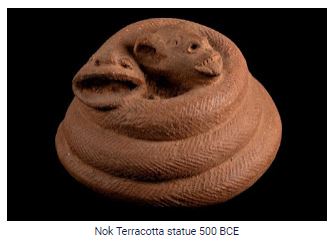 The humans are represented with hairstyle or headress as complex and detailed as they are varied and refined, with what looks like jewelry and amulets. All these elements were sculpted apart and then added on to the rest of the sculptures. These elements also suggests that the human statuettes are important people of the Nok culture and/or government so either kings or dignitaries. The men all have a genital type of covering testimonial of the circumcision practice. There is also one important fact to note: all those statues or figurines did not have any human bones around them so they were not part of a funerary ritual. But theories abound to explain their existence such as representations of kings and queens, ancestors while the amulets are destined to ward off bad harvest, infertility or disease.

Every human figure is represented with an elongated head and face, eyes rather in an almond-shaped with the mouth partly open. All the statues are unique and none of them do exactly the same thing or pose exactly the same way. This proves the uniqueness of each statue which has been studied independently from the others.

The kingdom of Nok was the first to cultivate pearl millet in the region. The millet is a type of plant that can grown despite extreme climactic conditions such as floods. The pearl millet is considered today as a super food. The noks knew how to make vegetable oil that was then used for cooking. They also produced yams.

The Noks were very sophisticated. They had a hierarchical society with inhabitants specialized in different domains. Historians have strong reasons to believe that they were led by kings, queens, nobles and priests. The inhabitants wore coton clothes with collars made out of pearls.

As yu might surmise, there is little we know about the Nok kingdom and the culture of the Noks in detail. We basically only have these terracotta artefacts. But these are highly praised and are the object of illegal trafficking since the 1960s. They figure on the “red list of african archeological objects” published by the Internation Council of Museum in 2000. Some of these sculptures were intercepted in 2008 by French customs agents and in 2010 by the American customs. Those statues were returned to Nigeria.