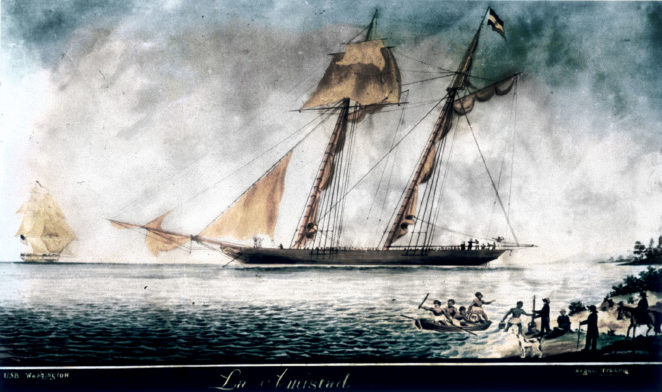 A revolt aboard a ship transporting slaves from one part of Cuba to another in 1839 led to a celebrated case before the US Supreme Court that some have seen as a precursor to the US Civil War.

La Amistad was a two-masted schooner in private ownership that was used to transport goods along the coast of Spanish-owned Cuba and to other parts of the Caribbean. On 28th June 1839 La Amistad set sail from Havana bound for a small port in eastern Cuba. The ship’s crew was captained by the owner, Don Ramon Ferrer.

On this occasion the ‘cargo’ included 53 slaves who had been sold in Havana and were being taken to the sugar plantation where they would be put to work and probably spend the rest of their lives. Also on board were the slaves’ new owners. The slaves were members of the Mende tribe from Sierra Leone who had been shipped across the Atlantic not long before. By this time the Atlantic slave trade had been declared illegal, although the institution of slavery had not.

The slaves were not conveyed in La Amistad in the conditions that they would probably have experienced during their previous voyage. Some of them were kept in the ship’s hold and others on deck.

After a few days at sea the slaves in the hold were able to free themselves and get hold of knives that were used for cutting cane. They overpowered the crew, some of whom were killed, including the captain. They demanded that the navigator set a new course, namely for Africa. However, he was able to trick the slaves and sailed north instead of east. The ship was eventually intercepted by an American naval ship, USS Washington, and escorted to New York.

The United States was now in possession of a Spanish ship together with its cargo of slaves, and it was the status of that cargo that was to occupy the best legal minds of the country over the next two years or so.

The Spanish demanded the immediate return of La Amistad and the slaves, and President Martin Van Buren was at first minded to agree with the request. However, it was pointed out to him that the transport of slaves in ships had been outlawed by both the United Kingdom and the United States, so under American law the slaves were the victims of a crime, not the perpetrators of one.

When the case came before the Supreme Court it was stated that the slaves had been ‘unlawfully kidnapped and forcibly and wrongfully carried on board’. This view was supported by Justice Joseph Story and the slaves therefore won their case, the verdict being delivered on 9th March 1841.

There was already a strong abolitionist movement, especially in the northern United States, and funds were raised to accommodate the freed slaves and give them lessons in English, as well as Bible classes. Further funds were raised to pay for their repatriation to Sierra Leone, which happened the following year.

One of the former slaves later returned to the United States to study at college, after which she became a Christian missionary back in Sierra Leone.

The Amistad case exposed the deep divide in American society between those who supported the institution of slavery and those who did not. Many southerners took the line that the slaves were non-persons who were the property of their owners and should therefore be returned to them, as would any other stolen and subsequently recovered goods. The abolitionists (led by former President John Quincy Adams) argued that persons who had been illegally transported to Cuba, and were therefore free, were entitled to the protection of the American legal system.

The Supreme Court verdict undermined the racist assumptions of the southerners and gave the abolitionists a significant moral victory. Tensions between north and south were heightened, and the case therefore constituted a step on the path that would eventually lead to civil war.

The case was remembered in 1997 when Steven Spielberg directed the film ‘Amistad’ that brought the case before a modern audience. Criticisms have been levelled at the film for its historical inaccuracies, and for portraying the case as a vital turning point in the story of the ending of slavery in the United States. It has to be remembered that the former slaves of the Amistad had returned home nearly 20 years before the first shot was fired in the war that finally settled the matter.