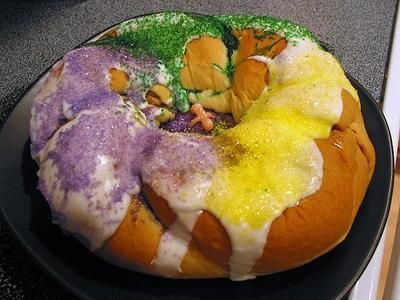 King Cake is a southern Louisiana tradition that happens as soon as the countdown starts for Mardi Gras.  The tradition was brought over to the New World from France in the late 1800’s.  The season for King Cakes starts on the Twelfth Night following Christmas.  This was the night that the three Wise Men arrived and brought gifts to baby Jesus.

The three traditional colors of King Cakes are purple which stands for justice, green for faith and yellow for power.  King Cake is basically a big coffee cake but modern bakeries have made them so much better by adding cream cheese fillings, and fruit fillings and topped off with chopped pecans.  A small baby is inserted into the cake from the bottom of the cake and the person who gets the baby in their slice of cake gets to be a “King” for the day.  They also get to bring the next King Cake.

King Cakes are available through Fat Tuesday (Mardi Gras), which falls the day before Ash Wednesday when Lent begins.  Sweets are normally not served during Lent.