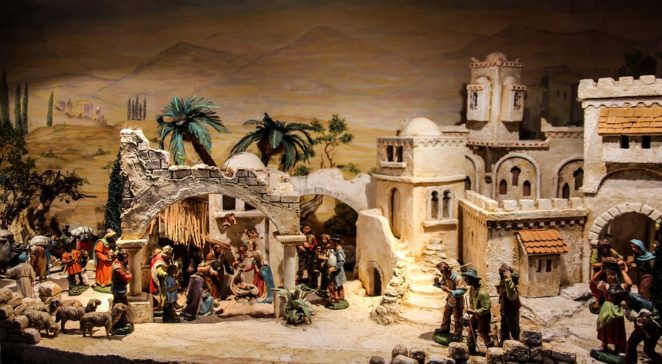 “Everybody knows” that Jesus was born in Bethlehem. But how likely is that? My contention is that the Gospel writers made up stories that do not stand up to scrutiny.

Where was Jesus born?

The two gospel writers who gave an account of the birth of Jesus, namely Matthew and Luke, had a problem. This was that Jesus came from Galilee and was therefore a northerner as far as the Jews of Jerusalem were concerned. The distance from his home village of Nazareth to Jerusalem was more than 60 miles, which might not sound like much to a modern car-driving person, but it would have involved several days of travelling to someone on foot or riding a donkey.

Matthew and Luke both came up with ingenious solutions. According to Matthew, Joseph and Mary lived in Bethlehem, where Jesus was born, but were warned that the child’s life was in danger. They therefore fled firstly to Egypt and then to Nazareth, which was presumably considered far enough from Jerusalem to be safe. Joseph would have had to abandon his home and business in Bethlehem and start all over again in a strange place where he would have been thought of as a foreigner.

Luke tried a different approach, which was to assume that Joseph and Mary were residents of Nazareth who were forced to travel to Bethlehem, where Jesus was born. They did not return to Nazareth immediately but waited until Mary had been “purified” and then took the child to the Temple in Jerusalem before setting off for home.

In order to achieve these scenarios both gospel writers had to devise a complicated series of events, each of which is open to question.

It is surely beyond doubt that the two stories cannot both have been true, not least because one would have to ask why each writer had not thought fit to give the details that the other thought were essential. Apart from that, Joseph and Mary cannot have started both from Nazareth and from Bethlehem.

The question then arises – if one of the stories must be wrong, why does that not apply to both stories? There is no reason to believe either account to be more reliable than the other, so surely the logical response is to discount both of them.

Why did the Gospel writers tell different stories?

One fact that is surely true is that both Matthew and Luke were trying to tell a story that fulfilled prophecies and therefore pointed out the significant features of the birth of Jesus. The literal truth of what happened did not matter, so the story could be allowed to develop in whatever way seemed expedient for achieving the prime purpose of the narrative.

It must also be remembered that neither gospel writer was an eyewitness of the Nativity events and must therefore either have got their facts from the people who were present at the time or made them up. Tradition has it that Joseph died before Jesus reached adulthood, which only leaves Mary. Also according to tradition, Luke got his facts from Peter. So, if Mary told Matthew and Peter what happened, why did she tell them two completely different stories?

Surely it is far more likely that Matthew and Luke made up stories to suit their purposes, and the truth of what happened had very little to do with it.

And was Jesus born in Bethlehem, as opposed to Nazareth? Given the hoops that the gospel writers jumped through to reach their conclusion, it does seem more than a little unlikely.