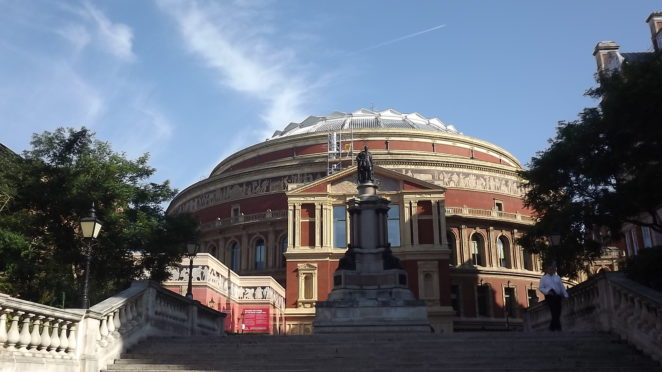 My wife and I went to a Prom concert at the Royal Albert Hall (London) on 10th August – it is an experience that I can heartily recommend.

The Proms season lasts from mid-July to early September every year, with a concert held at the RAH every night, plus a number of events at other venues. The total package constitutes the world’s largest annual classical music festival. The concert we attended was Prom 33.

One of the abiding features of the Proms is that they offer top-quality performances at affordable prices. That is where ‘promming’ comes into play – if you can’t afford to book a seat you can turn up on spec and watch and hear the concert from the central arena or the top gallery for only £6.00 if you are prepared to stand. There is room for more than 1,000 prommers at every concert.

We did not ‘prom’ on this occasion, although there were plenty of people of my age and older (this was a 65th birthday treat for me!) who did so. We had seats in the stalls that rise in an open ring around the central arena.

There can be very few (if any) concert halls in the world that resemble the Royal Albert Hall in all its respects. The building is circular (actually an ellipse) and the top of the dome is 135 feet above the ground. The concert platform is set at one end of the longer axis, with a massive organ behind and seats for chorus or choir singers on either side of the organ. These seats are available for the audience if a concert is purely orchestral.

As mentioned above, stall seats surround much of the arena, and behind these is the first tier of thirty or so boxes that can each seat twelve people. There are two more tiers of boxes above these, then another set of stall seats that rise steeply to the top gallery, where at least the prommers have something to lean on in the shape of a solid metal railing –assuming that they have a good head for heights!

The net result is that more than 5,000 people can get a perfect view of the platform with no interruption from pillars or the back of somebody’s head. More importantly, everyone can hear every note, however quietly it is played or sung. The acoustics were improved considerably some years ago when a number of circular ‘saucers’ were suspended from the ceiling that had the effect of killing the echo that had previously been a feature of the auditorium caused by the shape of the domed ceiling.

There was nothing out of the ordinary about the concert we attended – it was not played by a guest orchestra and the conductor and soloists were not world-famous performers – but there were very few empty seats and the arena was well occupied, although there was certainly room for more. My wife remarked on the fact that it was a very ‘white’ audience, which probably reflects the preference of Europeans for European music. She also said that it was unusual not to know anyone else in the audience, which is what normally happens when we go to a show closer to home! However, soon after saying this she told me that sitting immediately behind her was the well-known comedian Al Murray (of ‘Pub Landlord’ fame)!

The concert was a mixture of the familiar and the new (to me). There were four excerpts from the Peer Gynt suite by Grieg, with the brilliant Norwegian soprano Lise Davidsen singing ‘Solveig’s Song’. She also sang a piece by Sibelius that I did not know, namely Luonnotar.

The first half concluded with a much better-known work by Sibelius, the Karelia Suite.

The second half comprised two works that I did not know, but shall certainly seek out for further listening. The first was the Cello Concerto by Schumann (soloist Alban Gerhardt) and the second was the ‘Mathis der Maler’ Symphony by Hindemith. I have not heard enough music by Hindemith to form an opinion as to whether I like it or not, and my personal jury is still out on this score! There were certainly parts of it that had my rapt attention, but other sections left me cold. As I say, another hearing is needed.

In my youth I used to attend a lot of orchestral concerts, having the good fortune to live only a few miles from the home of the Bournemouth Symphony Orchestra. However, it is a long time since I last did so, and I was reminded very forcibly of the fact that nothing beats live music, played by brilliant musicians. I hope that the interval to my next orchestral experience, whether at a Prom or elsewhere, will not be too long!