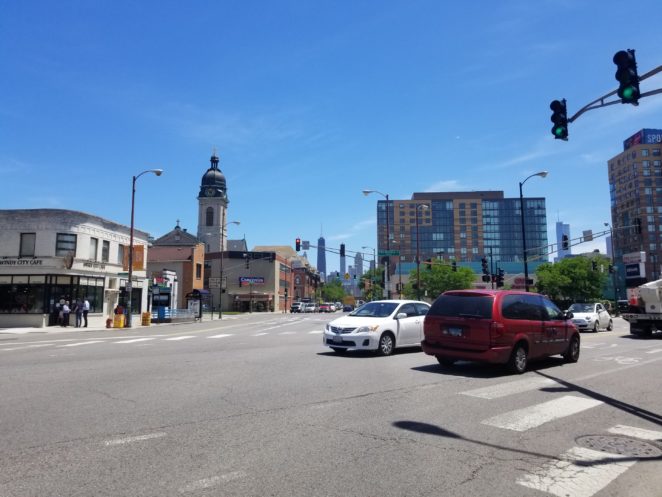 Today, I had an adventure filled ride in support of Multiple Sclerosis, which started from Chicago neighborhood East Garfield Park towards Ohio Street Beach and back. Off the top of my head the neighborhoods cycled through were Ukrainian Village, West Town, Noble Square, New North Side, River North, Magnificent Mile w/ a stops at Lake Shore Park for an upper body workout on the dip bars. After completing a dip workout, I entered the Lakefront path and headed towards Ohio Street Beach in Streeterville neighborhood, which sits diagonal from Navy Pier. Instead of going Navy Pier route, I headed towards Maggie Daily Park in route to Millennium Park, which puts me on Madison Street going towards Chicago Westside w/ sights the United Center on route.

The fun thing about having a road bike is cycling in the roads w/ cars, buses, and motor cycles. You must be extra cautious when riding because drivers do get distracted by many things and they cannot see you at times, so when I’m on the roads I tend to use crazy arm signals to get drivers attentions when I need to get over into a lane or when I’m sandwiched in between cars parked and drivers driving. It’s quite scary at times because you have these huge vehicles like buses that may not see you, so you must give them their space. While on this ride, I got honked at by one bus while in their lane, but I kept my distance and sped up. While hitting the Near Westside neighborhood, I came across the ‘Red Bull’ vehicle, yes! That resulted in a pit stop for a drink because we all know that ‘Red Bull’ gives you wings! And why not because these drinks are given out free, and I needed a last-minute swift kick in the ass being only 2 miles out from my apartment.

Total distance was 13.6 miles in support of Multiple Sclerosis, which I plan on doing similar route prior to this weekend. Every mile equals $1 in support of Multiple Sclerosis, which means I clocked $13 for this charity, but it doesn’t stop there because I have plenty more ground to cover before this week ends, as well as this month. I have a goal to hit at least 100 miles, which would put me at $100 for this charity. Fresh new routes keep me motivated for more because it’s an adventure, and who doesn’t love adventures to new places?

Thankfully, I made it back safe from this ride because it’s a crazy world out there especially on a bike, however as I write this I’m still feeling the aftermath of that ‘Red Bull’.