In the west part of the cave number 1 is demonstrating the infirmity, sickness, and death. Those are so-called stages of human life that motivated Lord Buddha to abandon the domestic life and it was the first inception that insisted him to find out the actual truth of human life. In the following cave, we will find some marvelous sculptures excavated on pillar and doors. At the end of this cave, a lively statue of Lord Buddha with Indra (at both sides of Lord) performing an extraterrestrial atmosphere in that secluded cave. Here Lord Buddha presented with full of empathy, and compassion. Take a moment to sit down here with the intent of peace, you will never be dejected. 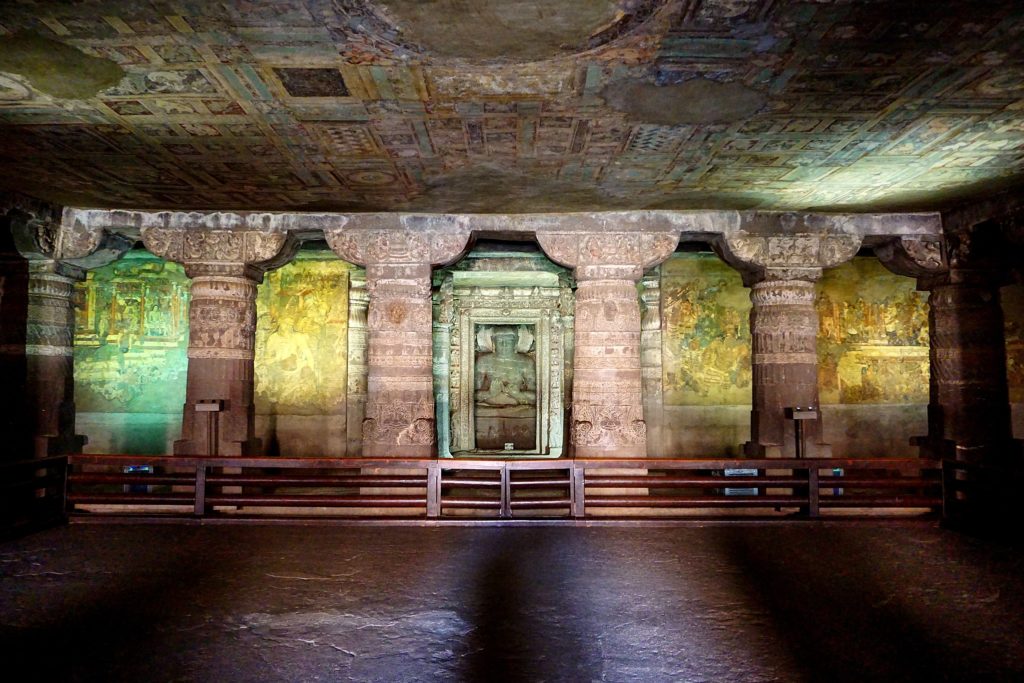 Here I would like to introduce with Indra seated in both sides of Lord. Indra is the God of rain, however, Indra is not the name of the God rather it’s the designation of the God who helps to provide rain.

On both sides of the door, we will find the statue of rivers named Ganga and Yamuna, in a female figurative form. In India, both are treated as Goddess. All the other parts of this cave full of paintings. On the front side, the Emperor second Pulokeshi is inviting the envoy of Khasru Parvej. In the east part of the cave is showing a hilly landscape and in the middle portion of two chambers of the cave, a serpent king and queen interacting with a royal attendant. An unprecedented painting about the devoted spiritual life of Lord Buddha painted on a wall of the womb of the cave. Some formidable characters of the extraterrestrial world had been scaring continuously Lord Buddha to postpone his efforts, while he was in full of meditative mind. They did it years after years and finally, failed to dislodge Buddha. Here is the excellent illustration of such highest label of exertions of Lord Buddha faced to achieve his coveted destination. Another unforgettable and world-famous painting of Lord Buddha named “Bodhisattva Padmapani”, shining with the light of self-realization, which is the highest destination of theosophy. 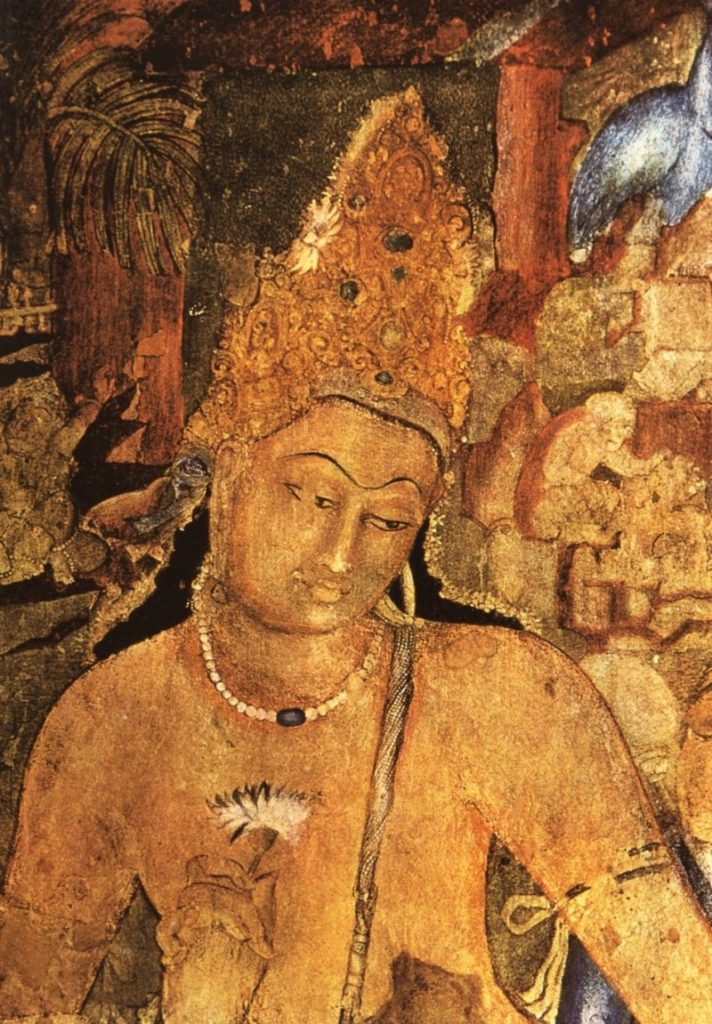 The painting – Bodhisattva Padmapani (The Lord Buddha after self-realization)

The panels of the roof are an example of the highest label of decorative design where the endless variety of patterns produced a flamboyant obsession. The artists of Ajanta cave used stylized fruits, birds, flowers, animals and even human figures in the composition of decorative design and have shown the infinite possibilities of this platform. Here the delightfulness of life is eternal. By keeping up this information in the knowledge that they had no interaction with outer part of the world; it is indeed astonishing, how they deluge such flow of life in this secluded cave!

There is also a painting where two bulls contending with each other, located on the western wall of this cave.

We will be watching similar excellent paintings in the cave number 2. Here, the decorative designs in the round shaped panels bearing the evidence of the artistic expertness. The liveliness of the paintings in the spandrels is awestruck. Most of the painting in cave number 2 based on the Jataka (pre-birth stories of Lord Buddha) and few of them conjoined from Ablokiteswar (the present life of Lord Buddha). Instead of several expressions of Lord Buddha, here we will be introduced to various spiritual symbols of Buddhism. A few of those paintings indistinctly uttering the stories of Jataka since they only have residuary line drawings to express themselves. 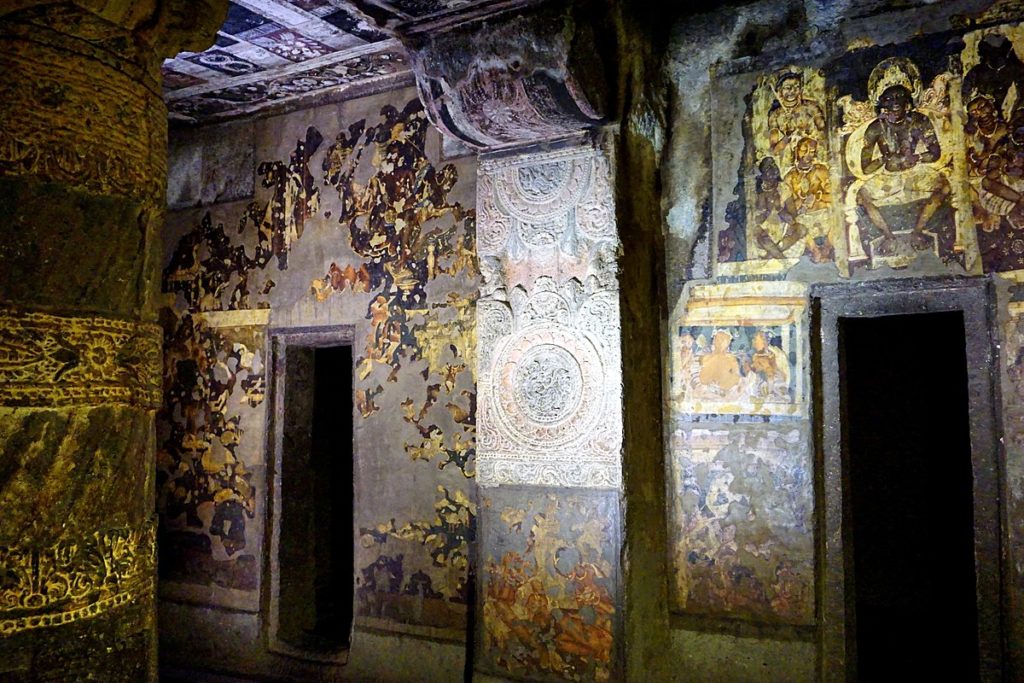 This is the interior view of cave number 2

Here it would not be a hyperbole if I pronounce, watching the paintings of Ajanta in a blog or elsewhere as a photographic format is just similar to guess about the ocean by watching a pond in a village! We have to keep it in mind that most of the paintings of Ajanta; we are watching here is as large as the painting bearing the diameter more than 20 feet! Moreover, we are not such devotees of Lord Buddha or having no spiritual impact like those painters who spent their lives in these cave for long years with full of meditative intuition just like a Buddhist mendicant. To understand the heartbeat of Ajanta painting, we need to evolve our emotions in regards to the Buddhism and have to bring forth our keenness. 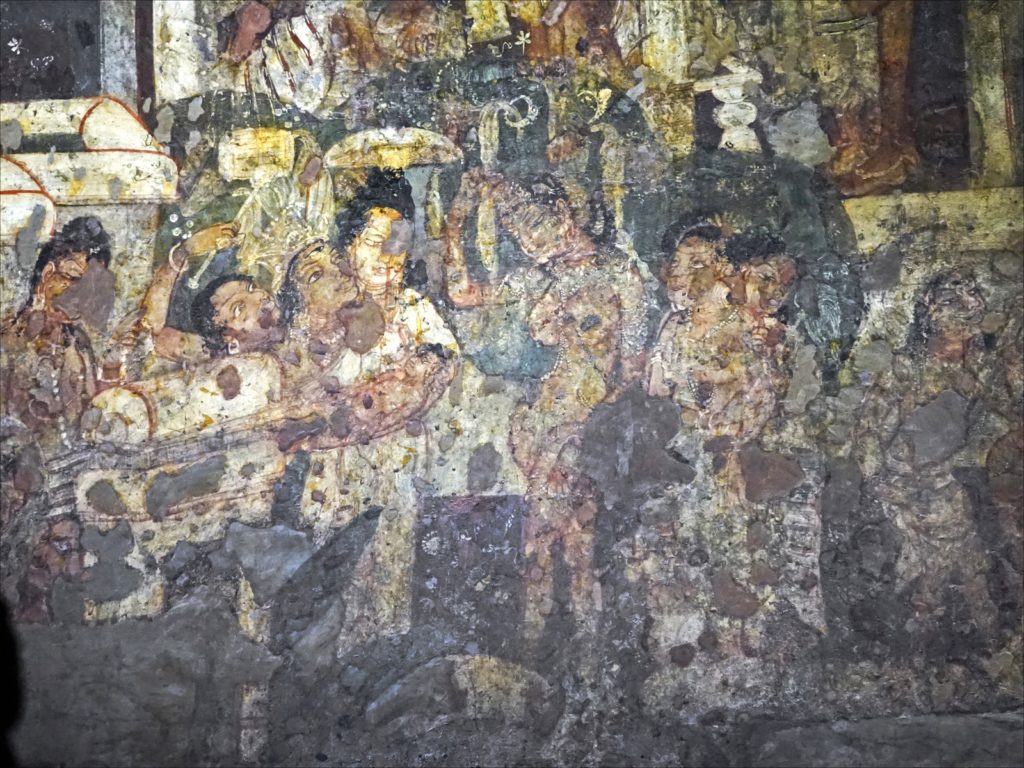 Painting in cave number – 2 illustrating the birth of Lord Buddha

To enjoy the paintings of Ajanta, we have to observe it by keeping up the standard distance for such large size paintings. Keep in mind, those artists had no burden to prove their expertness by showing the detail drawing in each step.

There are a few more attention-grabbing paintings in cave number 2, perplex ourselves. A girl is sited on the cradle and enjoying swings; the procession of a king with elephants, horses and attendants; a girl on the floor, saluting someone, and more. The painting of the procession has taken from Jataka (Pandit).

In next, we will be discussing on the subject of Ajanta painting in the perspective of Indian grammar of Painting. You will be amazed to explore what the innovative mind was produced some outstanding conceptions to represent the stories of Lord Buddha.

Until next time, have a memorious journey in Ajanta cave.