Based on the previous discourse, here I would like to say that although we attempted to establish about the innovative talent of Ajanta artists, however, the truth is, they could not claim the unconventionality on their creation. Such endeavor, we already found in Bharhut. It was the imperativeness of the Gothic art which bounded those artists to make such style of composition where medallions of the balustrades help to break the consistency of the straight line of the parapet and was necessary to have a bit decoration of those balustrades.

The highest label of artistry in such style we could find in Amaravati. It is a depiction related to the life of Lord Buddha where we can see some angels bearing the bagging pot of Buddha to the heaven. It was the problem of artists, in this composition, how they bring out the attention on the begging pot of Buddha since it is located at the top of all the masses.  Following this objective, artists of Amaravati placed those masses in such way which creates some strong but luminous lines indicating the begging pot of Lord Buddha. 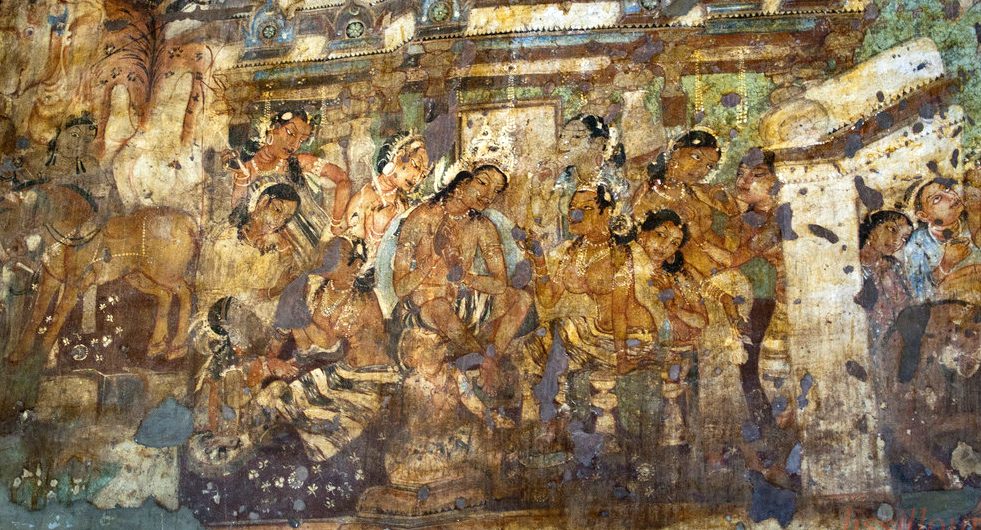 Example of the elliptical composition of Ajanta.

Now it is the question, why did they favor such elliptical composition and applied numerously in their paintings? To comprehend this question, we have to understand the secret Hindu spiritual philosophy dominating behind this conception. In the scripture of “Tantra” (A doctrine to get connected directly with God) or in the secret system of the universe that helps us to exist; indicates such elliptical shapes in every aspect!  Just think about our universe. In the center, sun shining like God and all the planets around it, moving from left to right by maintaining an elliptical line. If you tend to take a glance in cloud chamber of any Physics laboratory, you will have the same experience while running particles in the cloud chamber. All the particles will be running in the same fashion around the nuclear. The artists of Ajanta, Amaravati, Vharhut, knew it very well and they just applied this concept to their painting. They normally placed the significant element in the center as a pivotal part of the composition and other masses, they placed around it to define the weight of the central character.

In the view of Hindu philosophy, it is the effort of a devotee to perforate each step indicated as an elliptical border and have to reach to the center where God is waiting for him. To perform the story of Lord Buddha, it was the highest label of thought they applied in their painting to teach viewers, how to reach to the God (Buddha) and it is the actual hidden secret behind such Elliptical composition. 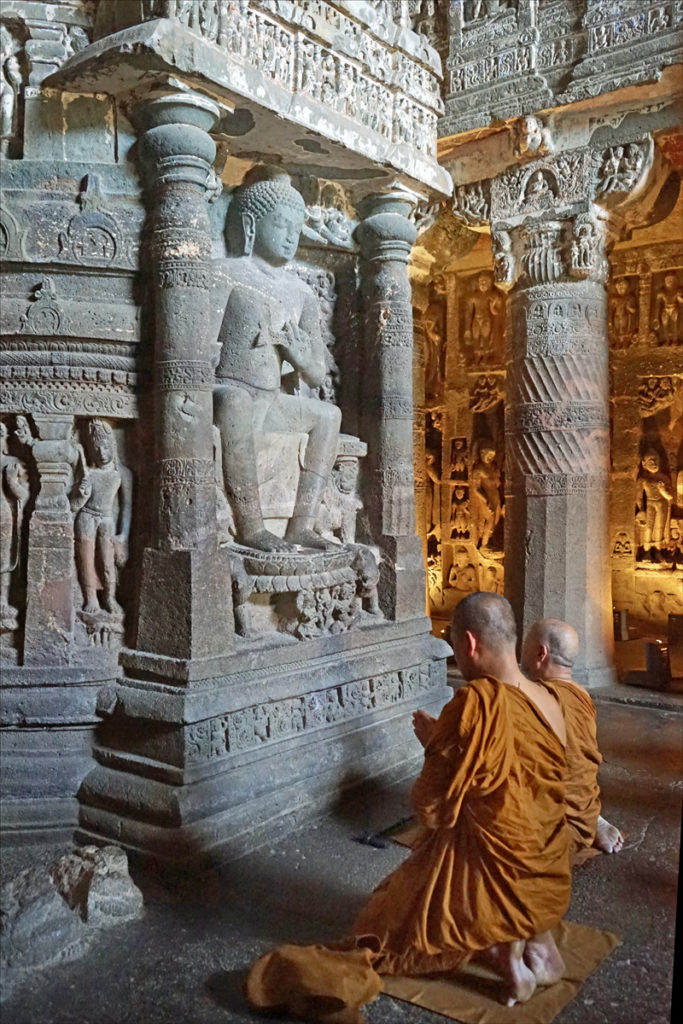 Probably it is right that they didn’t create this composition to convey the traditional concept or for the glorification of ornamental design. Rather they had the knowledge on the secret value of such round shape they implemented in composition. The reverberation of this concept, we will find in the painting related to the significant event of Lord Krishna named “Rash-Lela”, where in the center, Lord and his beloved Radha performed as the almighty creator of this universe and other lacqueys of Radha dancing around the Lord by maintaining an elliptical line. This painting is hugely available in Indian miniature paintings of Mughal era and also have a numerous prints in the Indian marketplace.

It is about the state of talent of those artists of Ajanta who not only implemented such style in Ajanta, rather astonishingly, they reformed that style and performed a new fashion, we recognized as Connecting-link composition.  They even extended the value of Connecting link composition by incorporate the various forms which increase the dignity of this composition.