Now we will tend to take a tour shortly to understand the species of the subjects of Ajanta painting.

As I stated that the cave number 9 and 10 was the oldest painting in Ajanta cave, so we will start from here. The time of excavation of this cave was 2nd to 1st century AD. Here you will find a masterpiece painting of a girl who is seating in the ground opposite to the viewers with her folded knees. Probably she is praying to God. The girl with a well-formed body structure is wearing beautiful ornaments that flamboyantly have demonstrated her. The painting is bearing the fantastic sense of human anatomy. Dr. Griffiths astonishingly revealed out this painting by scrubbing a damaged painting laid over this painting.

Rather than this painting, all the other parts of this cave amazingly composed with various flowers, creepers, geometric forms and a lot of the faces of Jakshas ( a mythological community of artists or creators). If you look concentrically, you will discover all the faces are same with different emotions and all they are looking at you. That secluded cave suddenly will start whispering with you and you will be thrilled to observe it.

The entrance of cave number 9 of Ajanta.

It is really a wonderful experience you will have when you think that this cave painted with such wonderful composition created by some unknown artists before the Christ. Those are now alive once again from the earlier pages of history and attempting to say something with you.

In the cave number 10, most of the paintings demolished by the assault of curious visitors, however, still, the cave conveying the shreds of evidence of excellent work in the frame of residual line drawing, which is outstanding too. Nowadays, we shall find some drawings of a group of elephants at the right side of this cave, which conveyed a complete painting in less than 150 years ago. At the left side, a gorgeous procession of men deployed on the horse and a little group of women marching on the road, behind the procession. Although, all are now damaged painting, only remaining some drawings; fortunately, a replication of those painting are still available in the Commonwealth office of London. 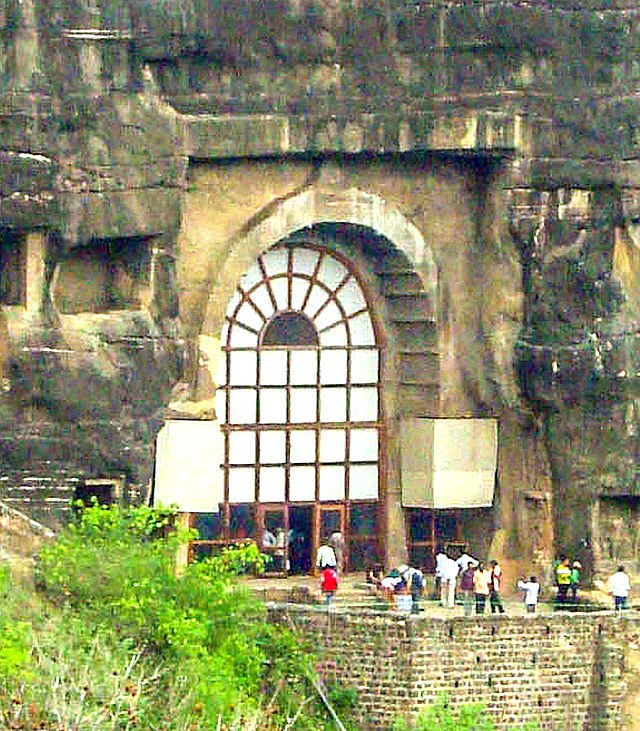 The entrance of the cave number 10

There is another remarkable painting in the cave number 10; a king is standing with his eight attendants around him. It’s probably the crest composition in Ajanta cave with an outstanding sense of perspective and emotional manifestation.  The expression in each hand gesture is nicely representing the inner side of the character. Another fantastic painting of Lord Buddha, depicted on a pillar is indicating the impression of Gandhara art, in Indian traditional proficiency. Look at the painting below, – 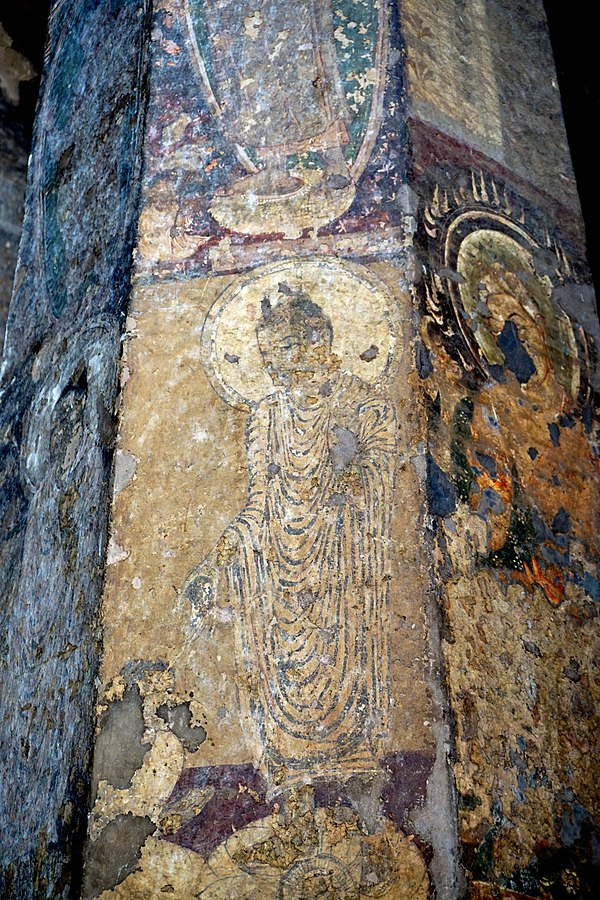 Now, we will move towards the 16 and 17 number cave. In 1874, Dr. Griffiths reproduced a painting from this cave and he named this masterpiece as, – “Princess about to die”. A girl is lying down on her bed by supporting her left hand on the pillow and an attendant held her from the back side. At the far back, another young girl is looking to the princess by meeting her two hands on the breast.  Some other female attendant is blowing air to the princess. A white hated old man peeping to the princess from the door and another seated beside the pillar. A curved hair man asking for something to a Persian hated man who is holding an earthen jar.  This painting is indeed about the death of a young princess and all the characters around her immersed in a non-linguistic condolence. The expression of such feeling is marvelous. It will touch your soul and will take you to an unknown sorrowful chapter of the history. 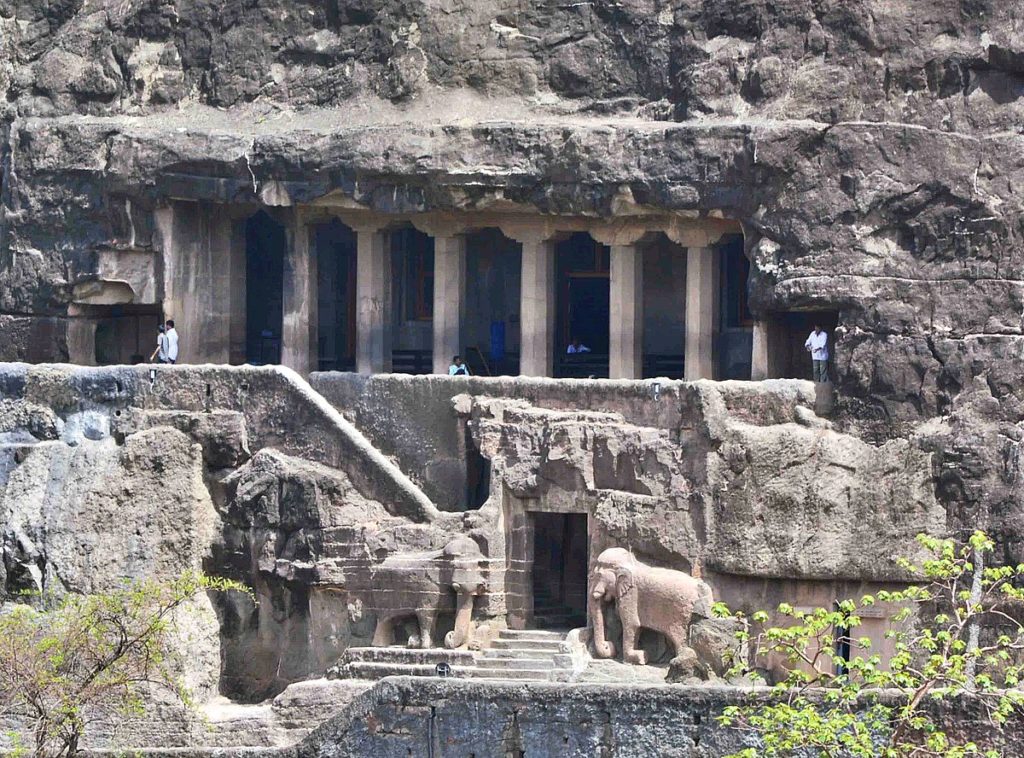 Entrance of the cave number – 16

In this cave, we will find a few more paintings of men with Persian hat, which indicates the relationship with those countries of the territory. Before leaving away from this cave of 17, I would like to introduce to an outstanding painting of Lord Buddha in an empathetic moment; –

Buddha is walking on a road for begging and asking common people by attending each door of the inhabitants. His wife named Yasodhara and his son named Rahul came out from the palace to give something to Lord. Rahul is asking to his mom,- “who is the mendicant”? His mom is trying to avoid his question and insisting to his son serve begs to that beggar. Finally, Buddha has appeared to his wife and son and requested to give something. Rahul provided some rice to his father without having any knowledge about the mendicant.  Lord Buddha knew it very well that both are his wife and son but according to the principle of the mendicant, they have to disregard the past husbandly relations of domestic life at any cost. What a dogmatic impassioned moment conveying the sacrifice of a mendicant. This painting demolished by the onslaught of incompetent visitors, however, it has recovered again with the kindest efforts of Lady Haring Hum. Below both images of original painting and the reproduction of Lady Haring Hum. 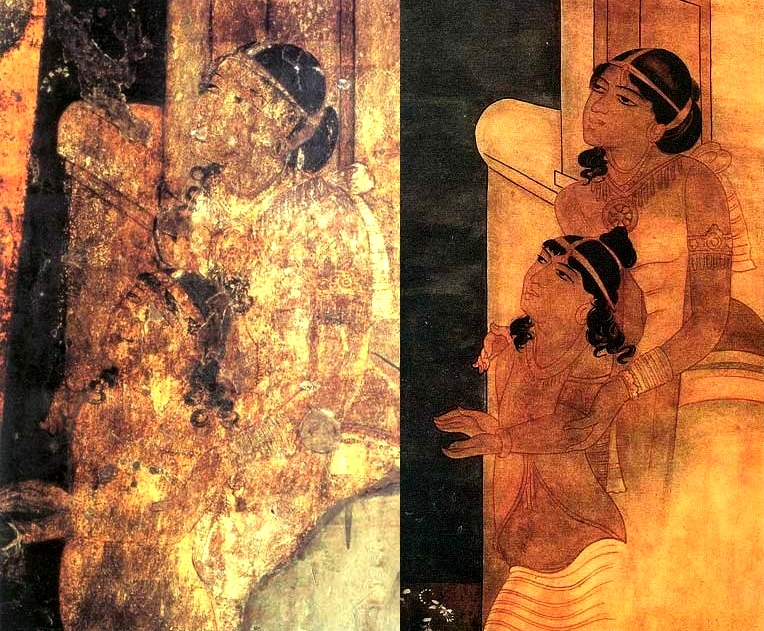 In next, we will be visiting in number 1 and 2 caves of Ajanta to explore some outstanding paintings. So please, stay tuned and enjoy. Thank you.