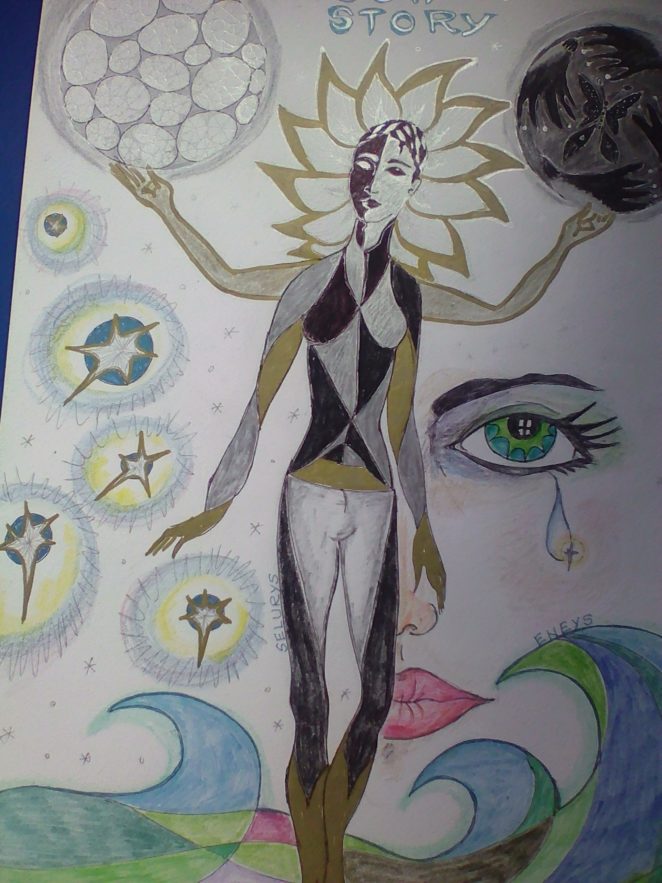 I always had an attraction for the Moon and that’s how I ended up one day trying to write a new myth about it. It’s fascinating how our magical companion is continuously influencing our life. Its grip upon the Ocean is mesmerizing and I felt it needed a story to tell it. Writing always came easily to me…but in the same time, drawing was my first way of expressing myself since I was a child. These drawing are various way of depicting what my Moon Story tells. The rest is for you to complete…with your own imagination. Enjoy!

“There was a time when the planet was just a barren bulge of rock rolling around the sun, followed closely by its equally dull companion, the Moon. The surface of the Earth was dull-brown, cracked and dusty and the grey moon in its skies was much closer than nowadays.

In the eerie silence of the hollow space surrounding this odd pair, Time was monotonously flowing and there was no sign that things would change anytime close. Oh, but that was just an illusion! As soon as the news of an untouched and hopeful planet spread through the Universe, fleets of young and bold gods took their course towards the planetary system. They were coming from different corners of the stellar vastness, their knowledge gained and polished throughout many other such challenges. There were land-gods and water-gods, air-gods and moon-gods, ice-gods and fire-gods, wind-gods, forest and plain gods, star-gods, thunder gods, rain gods and everything imagination could bring to life. They came in various shapes and size, greeting each other as old friends. Soon, the Earth was undergoing huge changes and some of these creative young spirits were ready to call this new planet: home.” 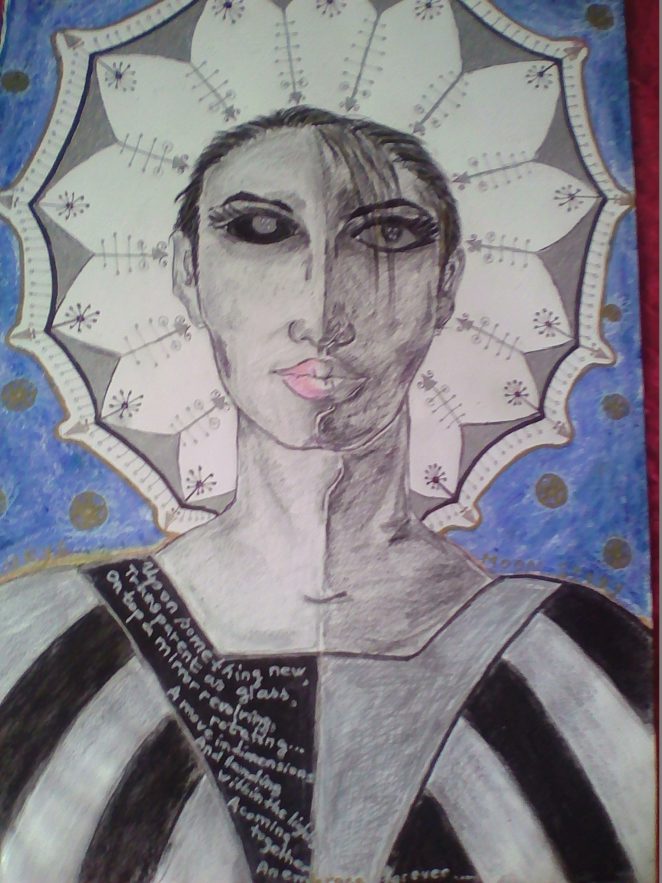 The young woman standing before them was tall and slender, an androgynous appearance. She was wearing a dark blue velvet tunic and slim pants and her black hair was braided in a complicated coiffure. But the most astonishing, even disturbing feature was her face: it was half black, half silver-white and the almond shaped eyes were matching the opposite colors. From the black half, the eye of liquid silver was watching them coldly, piercingly while the night black eye of the silver side had a warm but melancholic look. The woman bowed politely towards the audience.

-I salute you-she said and this time her voice was deep and soft. Let me introduce myself: I’m Selurys and Arauss is my step-brother. I came here to change the fate of the modest companion of this planet."

Drawing in color pencil on paper. This is the second image of Selurys, as I was trying to capture both the mystery and the duality of hisher appearance. 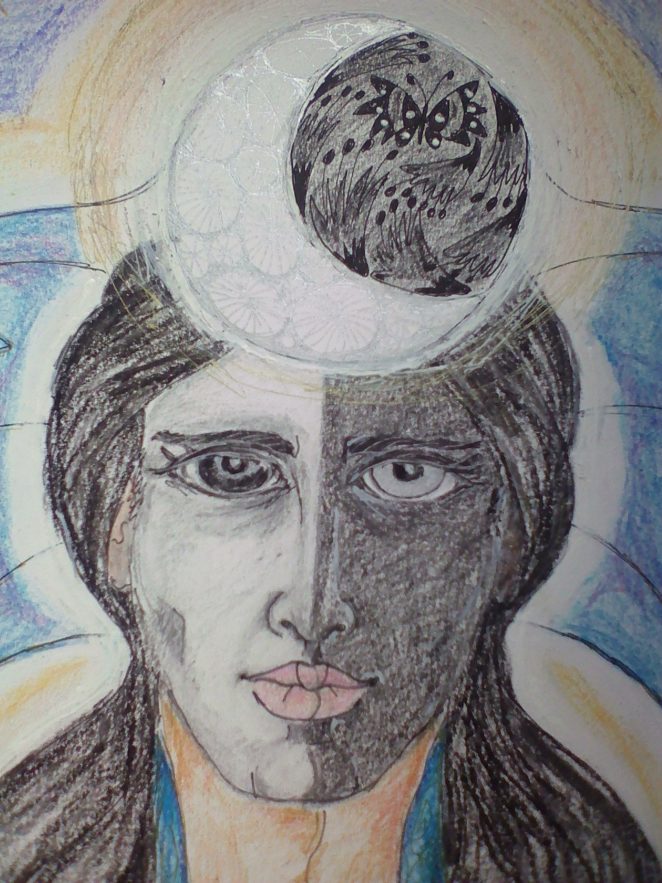 Mesmerized by her spinning, stars were leaving their places one by one, gathering in an enchanted flow, spreading, crashing to the ground with the sound of a million crystal bells…Swoosh! Selurys was turning and the velvet canopy trembled and stars were falling like the rain…Swoosh! The Goddess turned and the glow draped her in a silver cocoon...Swoosh! She kept turning as millions of shards and star-splinters were sinking deep in the soft dust…

Black and white, black and white…Selurys was dancing, swirling, while under her feet, graceful dandelions erupted, turning the plain into a swaying ocean of silver globes. When the last dusty grey spot was covered in silver white, the goddess stopped to catch her breath. The surface of the moon was gleaming and glittering in the milky light.

With a faint smile on her face, Selurys left the bright side of the moon and turned her attention towards the one hidden in the shadow. This side was eternally facing the star-specked darkness of the Universe and light could not survive on its surface. Nonetheless, the moon deserved beauty on both its sides so Selurys traced a few magic signs in the dust and slowly blew air over them.

A shiver ran across the dark land and the rocky crust seemed to waver…then cracked. Tall, dark stems were rising one by one from the cracks, bearing clusters of glossy, black flower bells. The thin, cold air was filling with sweet scents and tiny, silver-spotted black butterflies were flying up and down the dark plain. The work was done; the Moon, faithful friend and follower of the Earth was shining in full glory. Exhausted but happy, Selurys lay down and fell asleep. The Gates of Dawn were soon opening and Arauss was ready to give the start of a new day."

Third image of Selurys, drawing in color pencils on paper.

And when you stand on a shore, watching the tide moving the swaying turquoise waters, remember that once there was an unexpected love....

". The planet is calmly rolling around its blazing Sun while the blue-eyed Ocean lies in the strong arms of the Land. She joyfully rolls her white-tipped waves from shore to shore, from island to island, carrying ships and sails. But like clockwork, she also follows the pull of the Moon, running wildly towards the horizon, mesmerized by the invisible power calling her. Torn between her two loves, she laughs and cries; she cries and laughs with tears of pearls…."

Drawing in color pencil on paper. Selurys, the Moon God(dess) and Eneys, the Ocean Goddess

This is my first drawing illustrating the story of how the Moon was born. It shows Selurys, the Telurian God(dess) and Eneys, the Ocean Goddess. It all started when the planet was young and barren....