Writing blog is just like writing a Life-book that we are doing until our death and adding a new chapter in each new year that fills with hope, joy and a bit of dream. A very happy and glorious New Year to all my valued readers and fellow members of the Virily community who continue inspiring me to go towards my destination.

However, by following up the previous discussion related to the composition of Ajanta cave painting, here I would like to start the second episode.

The second technique has been staged after such method of symmetrical composition where a composition is structured by concatenating the several groups in a systematic way.  We can easily ascribe a name of such procedure as “Connecting-link composition”. It is a unique method of composition that has widely found only in Ajanta cave painting. The advantage of such composition is; respectively it can describe the several segments of a tale of Jataka widely. I think, probably, the artists of Ajanta have felt the hindrance of a painting where it would not possible to show the efflux of the time anyway. Therefore, they discovered such unique idea of composition we recognized as the “Connecting-link” and overcome the obstacle. It’s really a great discovery in the history of oriental painting that only found in Ajanta. 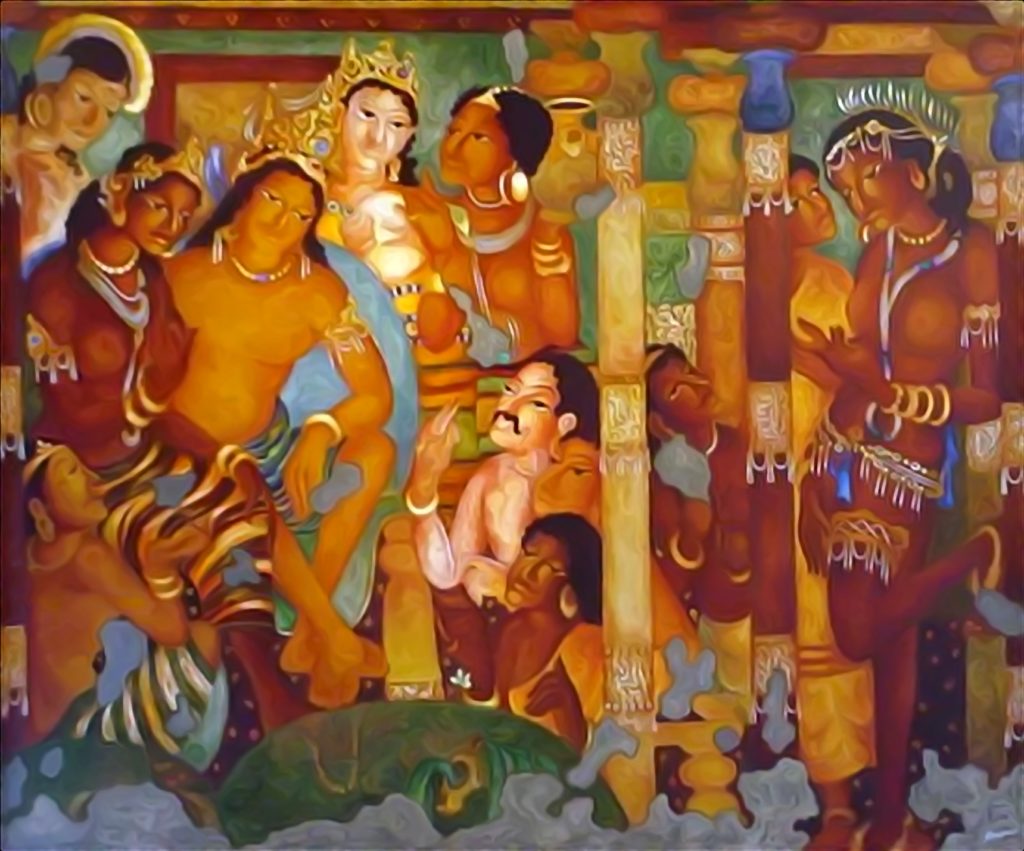 Actually, in the section of art, such method of composition was a specialty of Ancient India. The repercussion of this unique idea, we can see in the Japanese composition of Makimono. Artists of western territory habituate to view any scene or object in a frame that stands on a stationary viewpoint, but on that time, the artists of India habituated to observe any scene respectively in several frames just like a panoramic view.  Imagine, that you are traveling in a train and seated at the side of the window; each scene of a vast landscape severally comes to you in the frame of the window. In the most rural area of Bengal, still, has the same tradition while a storyteller stage any mythological folk story for the common people; use such fashion by illustrating the stories in several papers or cloths respectively. Below is an example of Bengal folk tell illustrated step by step in a long cloth named PAD. 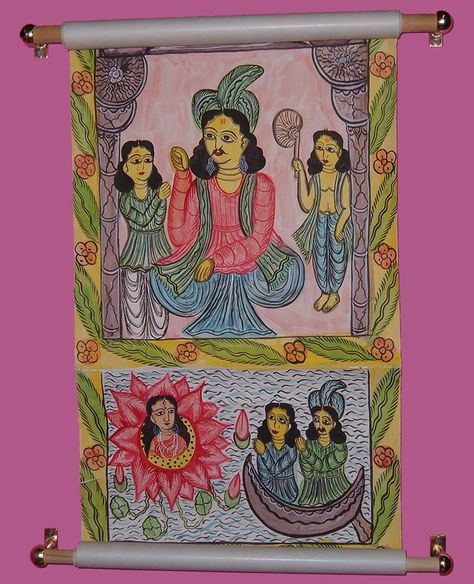 It was a wonderful technique of composition represents the highest label of intelligence of those ancient artists when we discover a unique instrumentation to establish a connection between two or more groups. What did they do? To divide as well as keep the connection between two groups, they used any object significantly performed as the punctuation of a story. Mostly those were either portal of any township, the front door of any temple, or, tree, pillar etc. Meanwhile, they oriented all the figures of a storytelling composition that were perfectly designating the pivotal part of the group.

We will find the similar concept in Sanchi in the primary stage and the improved version in Amaravati.  The artists of Ajanta not just have taken the same horizon of Amaravati but they revved up the concept that vindicated their extraordinary talent. What is the difference in this rational area between Amaravati and Ajanta? The instrumentation in the connecting-link composition of Amaravati artists, was inferior; those secondary objects came as a necessary part of the composition; but in Ajanta, those objects took a significant place act as a straight or diagonal line that prevents the mass of figures appears abruptly as well as change the regular recurrence of the composition. As a metaphor, it’s a symphony of lute that basically not correlated to any song but performing a wonderful cadence that produces an unprecedented obsession. At a glance, presumably the group of figures of any composition appears disorderly; but if we consider, those figures work as the main subjects of the piece and set us to the center of the group with their significant figurative movements as well as, it also helps us to move to the next group. The gestures, body language, expression, grab our attention and insist us to move in the right direction. It means, the line drawings related to those main figures guide us to move around. The other figures around the main group, work as a connector of the next composition or group. How does it work? We should have to observe them deeply. Their profile face, turning of the body, line of vision, moreover, those figures subordinate in a stipulated group just ignore their own and indicate to the next scene or group which curiously motivate us to move by following their gestures. Artists of Ajanta used those secondary figures as a bridge between two segments. I strongly suggest you watch the first image I stapled with this article to understand clearly.

In next, I’ll be discussing the third and most vital style of composition they performed in those caves and am sure, you will be charmed to discover their innovative talent once again. Thank you.