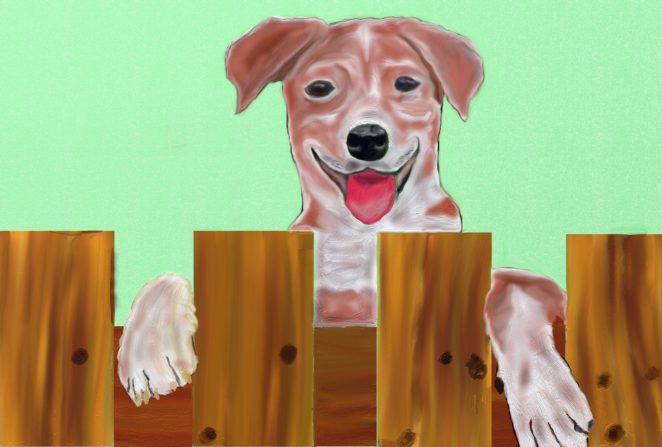 As a pet owner of both cats and dogs, this is something that I feel passionate about.  It’s also a pet peeve of mine pardon the pun.  I have an issue when dog owners allow their dogs to get out of their yards.  I live in a neighborhood where I find this happening quite a bit.  I see stray dogs as well, but that is a different matter, these dogs don’t have homes, but those that do should they really be getting out of the yard? We have had incidents where some dogs from our neighborhood have got into our front yard where our cats reside, which isn’t a good thing and we had to chase to do off.  Now as I said I have two dogs, name Buddy and Oso, no this isn’t a picture of them, of course not it’s an illustration.  Anyway, the reason I didn’t put a picture of Buddy and Oso is that these two dogs don’t sit still long enough to get a decent photo so I went with this.  Anyway, we now keep them properly pinned up in the back yard.  This is something we learn the hard way.  When I was younger we allowed out dogs in the front yard which have a lower fence, we also happen to live about a block away from the main street.  Needless to say, a few of our dogs did get loose and we lost two of them to that street. Because our dogs we used as protection aswell as companionship, my dad invested in a security door for the front and then pinned the dogs in the back yard where the fence was much higher, so the dogs were unable to jump over it.

Why do I bring all this up? As I said I have seen dogs leaving their yards in my neighborhood. This is not only a safety issue for the dogs but for pedestrians as well.  One of which I happen to be and I have had a few close calls with some very large dogs in the neighborhood who have homes. Fortunately, their owners were around, but the thing is if the owner wasn’t around and the dog happens to attack someone, animal control would have a right to take the dog.  So, again not a good idea to let a dog leave the yard, my family learns this the hard way and I just wish others in my neighborhood would as well.