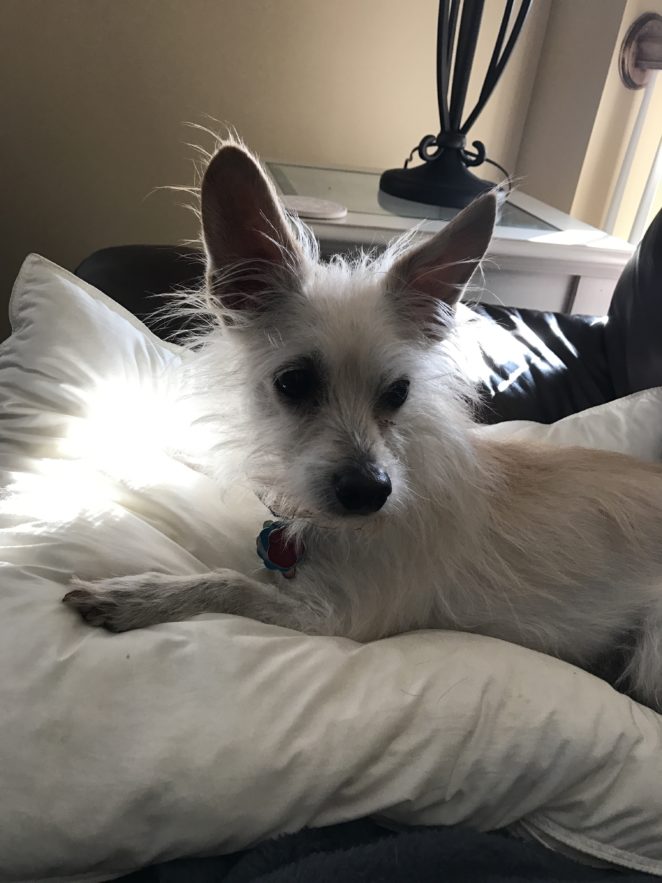 This is Wappa. He is a 9 year old West Highland Terrier Mix per Pets By Judy where we adopted him from. One day Richard and I drove by a PetSmart and saw that they were having an adoption event. We decided to stop in because we were thinking about adopting another dog as a friend for Sam. (Wappa is the second fur baby we adopted) So we stopped in and saw this scrawny, skinny, hairless dog just sitting in one of the cages. We asked to walk him and we fell in love. Wappa looked so pitiful. We weren’t sure so we walked to our car and started to drive away. Wappa looked so sad as we were leaving. We got down the street and turned around. We just couldn’t leave as we knew Wappa needed to be saved!! We went back and adopted Wappa. We were told by the adoption counselor that Wappa was turned in 3 times before!! How horrible!! Wappa was 1 1/2 when we adopted him and already had that name so we didn’t change it. When we brought Wappa home we noticed that he had worms, an old broken tail injury and staples in his stomach!! I called Pets By Judy and they took care of the worms and staples. My guess is that Wappa had a hernia at some point.

Wappa was hard to train and he must have been beaten in the past as he tends to growl and show his teeth when he does something bad and I say no. He has NEVER bitten me, I just think it’s his defense mechanism. Besides he has that broken tail that can’t be fixed. But Wappa has a happy ending!! He is no longer scrawny or skinny and his hair, what hair he has, has grown back!! He is a lovable boy. He always has to lay near me on the couch. And if Dexter or Sam is laying near me Wappa will sit on the floor and look at me and whine. So I have to move one of the other boys so Wappa can be next to me. Lol

We actually think that Wappa may have Chihuahua in him because of his radar ears. Lol But I guess we will never know. That’s ok tho as we love him no matter what breed he may be!!