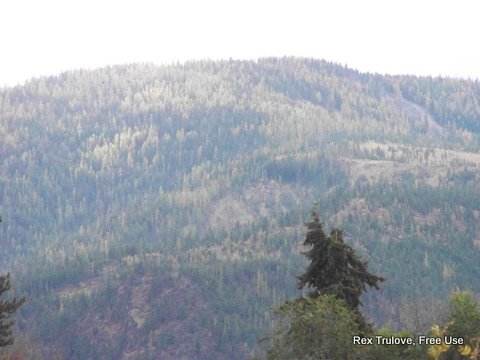 A conifer tree is any tree that produces its seeds in a cone. Not all of the cones look like what most people think of, like pine cones and fir cones, though both pines and firs are conifers. Cedars, junipers, and redwoods are all conifers, too.

The appearance of the leaves can be varied, too. Pines and firs have needle-shaped leaves. Pine needles are leaves of pine trees. Cedars, junipers, and redwoods have leaves that appear usually as flattened bracts.

All of these trees do lose their leaves, but it doesn’t occur as with deciduous trees, which lose them all at once and spend the winter without leaves. That is the big difference between evergreens and deciduous trees.

Here is the part that apparently a lot of people don’t know. There is a conifer that is called the Western Larch or Tamarack (Larix occidentalis) that is not an evergreen. Larches are in the pine family and they do have needles and produce cones, so they are definitely conifers. However, they are unique because each year in late autumn, larch needles turn golden-yellow, then, like other deciduous trees, they drop their leaves/needles.

For people who see this for the first time, the common thought is that the trees are dying. Indeed, they look that way, since they spend the winter bare of needles. In the spring, though, new needles grow.

The picture I’m using here was taken from my back porch a few years ago of the hillside south of our town. The large swath of golden-yellow trees are larches. The trees that are still green are mostly firs, with some pines here and there. The trees that are noticeable in the picture are all conifers, but not all of them are evergreens.