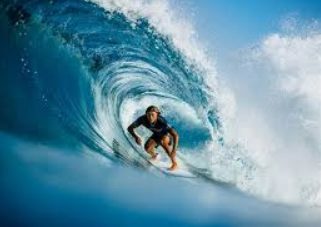 The 1970s were the days of my youth when there were endless, streams of “chicks” hanging out at the Dolphin-lifesaver’s clubhouse where I was a cadet.  Summer holidays were endless, so too were wave-sets of 7 “tubes-in -a row” The term we used for a series of wave shore breaks curling over into “tubes”, at spring-tide, 80 meters from the beach and there was the Surfaris band.

First, there is a lull, absolute quiet, then there is that electrified feeling from tons of water rapidly rushing past, underneath my 9-foot Surfari-Noserider surfboard, streaking towards the beach. My pulse started racing, as I glanced over my shoulder toward the mother of all waves starting to rise up and bear down on me. In anticipation of what may just turn out, to be the ride of my life, I started paddling towards the beach. Suddenly, I was locked into the momentum of the wave. Sharply, my board dipped down at the nose, beneath the board was a ten-foot trough and my board was rapidly sliding down into it.

The raw inertia fired up my adrenalin, almost at that exact moment, I realized that wave was a right-shore break and I forced the front of the board to turn right into the open tube, as behind me, the crest of the wave was already curling over into the familiar shape of a perfect tube or pipeline. The power of the wave picked up and began roughly thrusting my board, to the right and into the curving watery mass. Briefly, I snuck a glance skyward, but instead, of the sky, it had been replaced by a canopy of lucid, emerald-colored water. Directly ahead was the only visible, disc-shaped piece of blue sky… I was finally inside the tube and it was awesome. I took a peek to the back of the board, and about fifteen feet behind me, inside the translucent wall of water, I spotted a pod of bottlenose dolphins, doing exactly what I was doing but, effortlessly.

There were a few more pipelines and several dozen more wipeouts in the ensuing years before I hung up my board for the last time.  I had returned from the war in Angola, only to find that the boards being used, had shrunk to half of the original size we used, just a mere three years earlier.

The Beach Boys, The Shadows, The Ventures, and this group, the Surfaris was what we surfed and rocked to back in the day. A strange bit of rock history trivia: According to a guitar magazine interview, was this song itself and is why Eddie Van Halen played the guitar; he’d bought himself the drum kit, but he never had any time to practice on it, and then came home one day, to hear his young brother Alex managing the drum part perfectly and as can be seen here, Eddie couldn’t even imagine catching up. So he started playing Alex’s guitar instead.