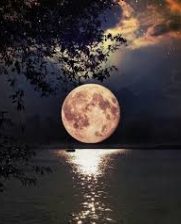 Once the moon has risen higher into the sky, the depth cues dissipate. Due to this, the apparent distance theory theorizes, we’re inclined to see the moon as the closer on the horizon than we view it when elevated in the sky. This illusion is called: Apparent moon distance theory. Scientists have discovered evidence in support of the apparent distance theory. In one such observation, partakers viewed the moon as being farther away and 1.3 times larger when it was watched over natural terrain. Researchers then masked off the terrain by having partakers study the moon through a hole, cut in a piece of cardboard, this caused the moon distance theory illusion, to disappear completely. This year, the final two appearances of a full supermoon was in May, 6 and 7 2020, respectively.

According to this reasonable interpretation for the moon illusion, depth perception plays a crucial part in how we view the moon high in the sky versus when it’s on the horizon. This assumption is focused on the supposition, that when you look at the moon on the horizon, you are viewing it in the company of depth cues such as mountains, trees, and various other pieces of static scenery.