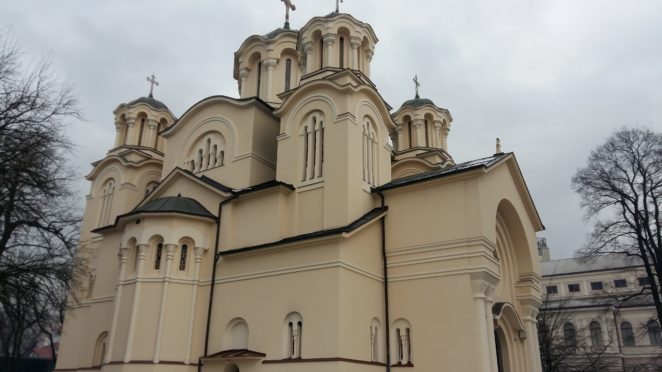 Church of St. Cyril and Methodius is a church of the Slovenian branch of the Serbian Orthodox Church, located between Prešeren and Tivoli roads, in the immediate vicinity of the National Gallery, the Modern Gallery and the Tivoli Park in Ljubljana. It is the only typical example of Orthodox architecture from the period between the two world wars in Slovenia, which stands out especially for its rich interior design. After the founding of the Serbian Orthodox Church in Ljubljana in 1921, the church was consecrated in 1932 by the then Serbian patriarch Varnava. In the same year, the plan for the church was drawn up by Momir Korunovic, who based the medieval Serbian five-domed church on the basis of a Greek cross. Church of St. Cyril and Methodius was completed informally in 1936. The interior is adorned with murals that are the work of sculptors Dragomir Jasovic and Misa Mladenovic, the iconostasis is the work of Debur brothers Nestor and Lazar Aleksievic, and the icons are painted by sculptor Mirko Subic .